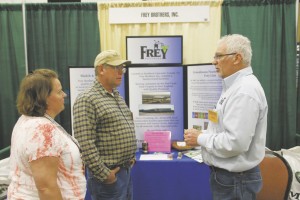 by Bill and Mary Weaver
The Mid-Atlantic Fruit and Vegetable Convention, held at Hershey, PA in February enjoyed its best attendance ever. One hundred sixty exhibitors and their displays filled the Trade Show. Bill Troxell, PVGA Executive Secretary, estimated the Convention attracted a total of about 2,400 people.
“The bus tour and workshops on Monday, preceding the convention, attracted more than 500 people,” noted Troxell, “and we had to turn some people away for lack of space.”
These recently started special activities, “add a whole new dimension to the Convention, and make it more worthwhile for growers to travel to the Convention from out of state,” Troxell added.
Convention planners completed the complex task of designing over 193 separate sessions, including some in Spanish. Attendees could choose from eight concurrent sessions running all three days of the Convention that included subjects of interest to everyone.
Elaine Froese gave the keynote address, on the subject of dealing with relationship issues in family businesses. During the Convention, PVGA celebrated its 90th anniversary.