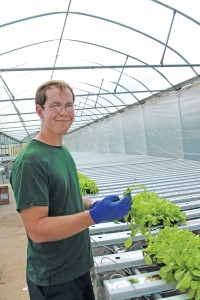 by Karl H. Kazaks
“If I bought everything new,” Mock said, “I’d only be able to put up three houses, instead of 10.” Over the years Mock has sourced his used houses and equipment from sellers in a number of states, including North Carolina, Kentucky, Virginia, Iowa, Pennsylvania and West Virginia.
“I compare it to any other type of agricultural or horticultural operation. If you were starting out, would you buy everything brand new?” he asked. “A new tractor, a new corn chopper, a new mulch layer?” Mock has been planning the current expansion for a couple of years. After arranging financing, he broke ground for the 10 houses this past summer.
Because, as with most of the terrain here in West Virginia, his farm doesn’t have much continuous flat land, Mock started with intensive excavation and site work, to make a level spot for his new production center.
Six of the greenhouses are already erected, with one having just been brought into production. Mock will bring the other houses into production this winter, helping to meet the demand he has for his produce. They will use a NFT channel grow system. The others, which Mock expects to finish sometime next year, will use a raft design.
The 10 greenhouses will be located adjacent to each other. Some of Mock’s initial 20 greenhouses are side-by-side, but altogether they form a number of pods.
The layout of his first greenhouses — dispersed in pods — reflects both the pace of the initial expansion (steady, regular, a few houses each year) as well the nature of farm’s landscape (rolling).
Produce from the first 20 greenhouses are transported to a central storage and cooling center. Transit time to them from the greenhouses is not extreme, but when you add up every trip, it does take time. Improving the efficiency of the packing process is something that Mock has built into the design of his newest greenhouses. He’s put concrete in the first of his newest NFT channel houses, with the plan to take the channels to the back of the house by cart for packing. (In the existing houses, packing is done aside the channels, on collapsible folding tables).
As pallets get full, they will be moved to a cooler being built on the front side of the new 10 greenhouse production center. (The cooler was bought used, from a former beer distributorship.)
Mock grows six types of lettuce, including red butter, red oak leaf and green oak leaf, as well as cilantro, basil, watercress, dandelion greens, cucumbers and tomatoes. Production is about 40 percent tomatoes, 60 percent leafy greens. About 80 percent of the produce is sold wholesale. The remainder is sold at farmers markets. During the height of summer, Mock sells at six different markets. He’s also looking to sell to local school systems.
There’s also a half-acre of outdoor field grown production, where Mock grows red and green bell peppers, pickling cucumbers and green and yellow beans. He also grows ginger.
Originally from Pennsylvania, where he grew up in a family horticulture business, Mock still grows Christmas trees in the Keystone State. He likes hydroponics because it provides year-round income and utilizes year-round staffing. He currently has four full-time employees, as well as up to another dozen seasonally. “We take great pride in being a family operation,” he said.
Mock attributes some of his sustained success to the fact that he’s kept his capital expenses down by purchasing pre-owned houses and equipment. “I’d love to have everything brand new,” he said. “But you’re still running a business. I wouldn’t be where I’m at if I bought everything brand new.”
When it comes to considering used equipment, Mock advises growers to look outside the agriculture and horticulture industries. For example, he bought some grow trays made from two-inch by 12 foot PVC drain pipe from a school, which was jettisoning its hydroponic program, he says it’s been his best dollar-for-dollar investment. “You’ve got to keep your eyes open,” he said. Those who are watching what Mock has been able to accomplish the past 10 years here can only appreciate his accomplishments.