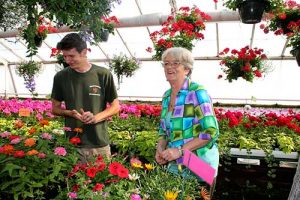 by Grey McAlister
Graduating from the Stockbridge School of Agriculture — UMass Amherst, in 2007, Tyler Annichiarico returned to North Adams, MA to work the family business — Mount Williams Greenhouse, Inc. The greenhouse was familiar territory even before Tyler went to school.
“My parents bought the greenhouse in ’78. I grew up and worked here,” Tyler said, gesturing to the eight greenhouses and main shop, interconnected with each other on under four acres of land.
Tyler has been in the business officially for eight years and knows everything about the land. “The shop was made in the 1920’s by the previous owners. The glass greenhouses were put up in the 30’s and 40’s. Three of the greenhouses used to be all roses,” said Tyler.
Over the years, as the popularity of local roses were overshadowed by other regions, Mount Williams Greenhouse consolidated the roses to one greenhouse, opening up the space for other flowers and varieties such as poinsettias, hanging baskets, geraniums, ferns, and many others.
“All greenhouses are open,” Tyler said, but stated many of their customers tend to stay in the shop or the show greenhouse.
To help keep their product at an exceptional quality Tyler adds a little TLC.
“I water everything with the hose,” Tyler said. “I get more control. We used to use a drip to water, but I like having more control.”
Along with keeping a close eye on the plant’s water, Tyler will also prune all the plants by hand as well as applying and mixing fertilizer. It’s a lot of work and can be very time consuming, but the benefits far outweigh the negatives. By refraining from using growth regulators and instead opting for pinching the plant, their product becomes big and beautiful in a short amount of time.
However, as with all other greenhouses, Mount Williams isn’t without their pests.
“We get aphids, mostly,” Tyler said. “But we’ve had good success with biologics.” Tyler makes sure to start early in the season with the addition of parasitic wasps. Tyler says they usually stay in the greenhouse, but they add more every other month. That seems to keep the aphids down. Tyler’s brother, who also helps with machinery and building maintenance, is experimenting with praying mantis in the greenhouse as well.
What took the family by surprise when it came to pests was what happened just last winter.
“We shut the other greenhouses down during the winter. But we keep the main going.” The family keeps the show greenhouse for their winter stock, but keeps the other greenhouses above freezing. This lead to an unexpected family moving in.
“There were rabbits nesting in the greenhouse over winter,” Tyler said, indicating one of the greenhouses away from the show greenhouse. When spring arrived and the greenhouses began to fill up with plants, the rabbits began to eat the products, despite the lettuce and kale which were offered to them. The rabbits didn’t find a new home until the weather was warm enough to leave the sides open during the night.
The majority of the structures have remained the same for decades. The original greenhouses still have the same glass panes, although polymer has been laid on top to increase heat retention. The concrete was all poured by hand by the original owner, including the bulb cellar.
The heaters, which are connected to a wood boiler, are automated. The wood is delivered from a saw mill for free, making it a resourceful and sustainable option during the cold winters.
Along with the sale of their plants in the greenhouses and their bouquet arrangements, Mount Williams Greenhouse will grow plants for particular organizations, such as the local college.
“We used to do landscaping,” Tyler said, “but insurance is very expensive.”
Along with Tyler and his brother, their cousin, their mother, three full-time shop employees and one part-time employee makes up the current workforce. Thus, Tyler has no plans to expand at the moment. That doesn’t mean the family is content with the status quo.
“We’re always evolving,” Kate, Tyler’s mother, said. The family holds various workshops every month, assisting their customers in making fairy or butterfly gardens, succulent gardens, or wreaths. Sometimes it is a little bit different, such as their paint and sip parties.
Since the greenhouse is a popular location for flower purchases, Tyler ensures the greenhouses are always packed as possible with annuals, perennials and other plants. He starts this preparation early.
“I start planting around February or March,” Tyler said. He goes into the greenhouse closest to the show greenhouse and sows the seeds or plants the plugs. “We use about 50 percent plugs to seeds,” Tyler said.
Even though the family keeps the greenhouses packed, there is one greenhouse that is reserved for an entirely different use. This greenhouse houses tropical plants for owners who travel frequently. Mount Williams will care for the plants until their owners come to collect them. Tyler said they are also willing to take plants whose owners can no longer care for them. One instance was a woman who had to move into a smaller home. Her plant, about eight feet tall, would not be able to fit in her new home. Mount Williams gladly took it in and this woman comes to visit it.
Numerous plants can be found in the greenhouse which have been there, now, for generations. “The rhododendron was my grandfather’s plant,” Tyler said, pointing to the giant plant wrapping itself around the structure of the greenhouse.
Many have burst through their pots and have become a part of the greenhouse over the years, being a source of interest and a conversation topic.
“It gets inside you,” said Kate. Once a teacher, Kate fell into the horticultural lifestyle due to her husband. Since then, two out of three of her sons seems to have taken to the lifestyle as well. “Once a farmer, always a farmer.”