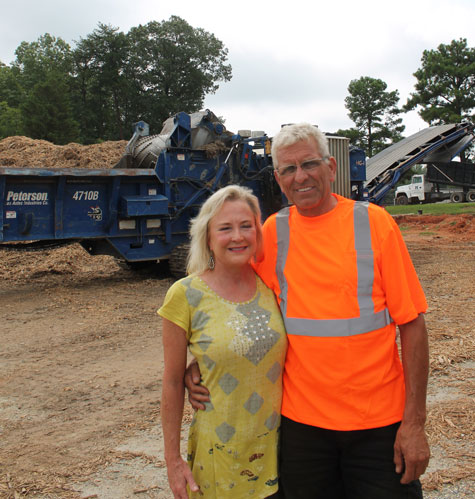 Its location – situated on a busy thoroughfare on the northern side of North Carolina’s Piedmont, in between the growing localities of the greater Greensboro region and the Raleigh-Durham Triangle – is ideal for a retail and wholesale gardening supply center.

Spread across a shrub yard, a mulch yard, a greenhouse complex and a fully-stocked retail store, the business has everything one needs when it comes to lawn, garden and landscape care: seeds, plants, fertilizer, shrubs, trees, tools, mulch, compost, straw, soil, sand, gravel, stone, rock, pipe, pavers, hydraulic hoses and fittings, other hardscaping supplies and more.

Established in 1971, the business is well-known in the area and has a loyal clientele, from large landscapers to homeowners coming in for a package of seeds (and maybe an ice cream or roasted peanuts).

Mebane Shrubbery is not your typical neighborhood nursery, however. Drive around back and you’ll see much more heavy equipment than at your typical garden center.

There’s a dozer, an excavator, and two wheel loaders. There are also trucks from Mack, Kenworth and Isuzu, as well as a mulch dyer, shaker screeners, and in the middle of it all, two horizontal grinders.

Mebane Shrubbery is also Mebane Mulch, a processing facility where timber products and pallets are turned into mulch.

At present, since Hayward hasn’t been able to find a reliable diesel mechanic, she has designated her husband, W.A., to take care of the equipment.

“He likes working with equipment and trucks,” Susan said. 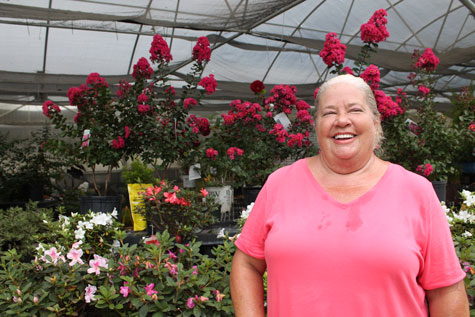 Renee Wilson is one of the horticulturalists at Mebane Shrubbery.

“We’re one of the few people who grind red cedar,” W.A. said.

One change the Haywards have made to the mulching operation is to screen before regrinding. That means regrinding only the larger pieces. “Our customers have been telling us ‘Our mulch has never lasted this long,’” W.A. said. “We’re selling a much better product.”

Since taking over Mebane Shrubbery last July, the Haywards have been hard at work, clocking 16 hour days and barely taking any days off. They’ve also made great progress modernizing and renovating the facility.

There’s new signage and new stripes in the parking lot, and soon all of the lighting, including in the greenhouse, will be LED. One of the biggest projects has been redesigning the layout of the mulch processing yard, including regrading to improve drainage.

W.A., who grew up in Canada, was involved in the gravel business as a youth before he became a military pilot. (He cooperated with American forces in Vietnam and elsewhere across the globe.) He and Susan met in Tampa, FL. It was there that the couple adopted four children, all siblings, all adopted on the same day.

“With us, no challenge is too big,” Susan said.

To find out more about Mebane Shrubbery, go to www.mebaneshrubberyinc.com, www.mebanemulch.com or call 336.578.3100.