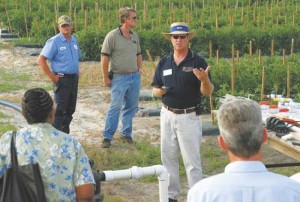 by Bill and Mary Weaver
Scheduling irrigation is a whole new ball game for growers today. The precision made possible by readily available information on EvapoTranspiration rates for your particular crop, and the soil moisture sensors that gives real-time readings of soil moisture at varying depths can enable growers to save time, money, pumping costs, and water use, while producing a higher quality crop with more yield per acre.
However, the available technology is evolving so rapidly that growers struggle to stay abreast of changes and potential improvements. Florida and California, two of the mostly highly regulated states because of their vulnerabilities, have made huge changes in their irrigation practices that are mirrored, but to a lesser extent, by states in less vulnerable positions for water availability and potential ground water contamination. Growers everywhere can learn from these changes.
Northern Florida’s Suwannee River Basin, for example, has coarse sand that is 10 to 12 feet deep, the very worst soil type for water holding capacity. This coarse sand, with less than 1 percent organic matter, lies atop the porous limestone of the Floridian Aquifer, which runs north and south the length of the state, and supplies drinking water.
Over-irrigation can quickly drive irrigation water, which is costly to pump, below the root zone, taking pricey nutrients with it, which can migrate into the aquifer. The State of Florida, through UF/IFAS Extension personnel like Robert Hochmuth and Dr. Mace Bauer of Columbia County, is committed to providing growers with the information and equipment they need to make good day-to-day decisions about when and how long to irrigate. Cost sharing is available for up to 75 percent of some needed equipment.
“The lesson we’ve learned with our coarse sandy soils is that long, single irrigation events are not the proper way for our growers using drip irrigation and plastic mulch technologies,” explained Robert Hochmuth, Regional Extension Agent for the Suwannee Valley. “Multiple, short irrigations, carefully scheduled using the technology available, can keep the moisture and the nutrients in the root zone.” The new moisture sensors at varying soil depths—perhaps 4”, 8” and 15-18”—can provide that information more effectively than the older TDR probes, which only measured moisture levels from the soil surface to about 8 inches deep.
“We have also learned that the main risk of leaching occurs in the first four weeks after planting, so it’s important that growers don’t apply too much granular fertilizer before laying plastic,” continued Hochmuth. Irrigation during that first four weeks can be reduced by about 50 percent from what growers traditionally used.” This is sound advice, which also applies to growers with other soil types, although to a lesser degree.
Some years ago, Mace Bauer, UF/IFAS Extension for Columbia County, FL saw the need for automation of systems for monitoring soil moisture. “Irrigation is a very busy time for growers. However there were no automated systems that were commercially available for remote monitoring of soil sensor readings by cell phone or computer to make that information conveniently available. The demand simply wasn’t there at the time,” explained Bauer.
Not easily deterred, Bauer set out to develop a prototype Advanced Irrigation Management System with an online user interface that delivered regular readings from its data logger to growers’ cell phones. The systems were solar powered. To start, he made these prototype systems available to about 15 growers in several counties at the growers’ expense. Bauer admits to being run ragged for awhile, trouble-shooting these systems, answering questions, and helping with needed adjustments when the systems were moved from field to field, because no commercial companies had yet entered this business.
“One farmer reported to me that he was able to eliminate four one-inch irrigation events on 180 acres using this system. This resulted in water savings of 19 million gallons and reduced his pumping costs by about $5,000. Other growers have taken notice and adopted the system, which includes an easy-to-understand graphic presentation of the data showing the volumetric water content at each of the levels monitored by the sensors.”
As more growers heard about the results growers using his system were achieving, his project created enough demand that several commercial companies have moved into Florida to supply similar systems, along with the needed technological services.
Bauer’s schedule became less hectic, and the automated systems are now available with a cost-share of up to 75 percent from the state and other agencies.
“As Florida growers have become more comfortable timing irrigations based on the readings of the soil moisture sensors and EvapoTranspiration data, less N and K need to be applied to the bed just before plastic is laid. This is the N that has the potential to leach away early in the season, before the plants have large enough root systems to make use of it,” Hochmuth said.
“More N and K can be applied through fertigation as needed. However, there is a trade-off, because liquid nutrients carry a higher price tag than granular,” noted Hochmuth. Nutrient needs are determined by growers, who do their own petiole sap tests with watermelons, or by traditional leaf tissue analyses to determine nutrient levels. Charts are available to growers with information on what optimum petiole sap nutrient levels should be at different stages of plant growth and fruiting.
With the soil moisture sensing technologies now available, the detailed EvapoTranspiration data, and tissue sampling methods to determine nutrient levels in the plants themselves, growers everywhere can fine-tune their irrigations to provide adequate water while avoiding overwatering that leaches pricey nutrients below the root zone.