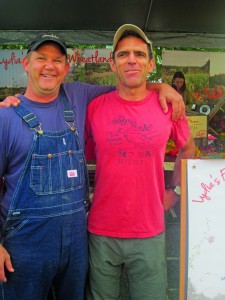 by Gus Schumacher
After noting the success of farmers expanding their operations to offer more local, fresh produce at Metro DC farmers markets, Robert Schubert purchased his own 10-acre farm just outside of Purcellville, VA in 2011.
Three months after the close of the sale on his property, Schubert began marketing his produce at the Arlington Courthouse Farmers Market, the Ward 8 Farmers Market in D.C. and The Farmers Market at Maryland in College Park, as well as selling vegetables directly to local restaurants.
Assisting Schubert on his fast start were the USDA’s Farm Service Agency and the Farm Credit system. The two agricultural lending organizations worked together to develop an innovative financing package that allowed him to begin farming in April 2012 and marketing his produce at Virginia and Maryland farmers markets just two months later.
Schubert reported solid sales in his first 2012 year. Following this initial success, Schubert plans to expand his operation for the 2013 and 2014 seasons by adding small fruits to his product base and erecting high tunnels to extend his growing season to satisfy rapidly growing demand. He hopes these efforts will result in his sales tripling in 2013.
Schubert offers advice to those interested in farming: “People want to buy food directly from growers. Try to grow food near the eaters, participate in farmers markets and work with neighborhood restaurants that are trying to source more of their food from local farmers.”
In addition to his new career as owner of Lydia’s Fields, Schubert previously served as Executive Director of the Columbia Heights Community Marketplace, a Wholesome Wave partner organization in Washington D.C. that ran an incredibly successful Double Value Coupon Program, which was dubbed “Festibucks” and took part in a Fruit and Vegetable Prescription Program during the 2012 market season. Schubert reported that an additional $60,000 in new revenue was generated for market farmers as a result of these innovative nutrition incentive programs, programs that also improved access to more affordable local produce for low income diet impacted families.
Wholesome Wave is a national non-profit based in Bridgeport, CT that works with more than 3,200 farmers at nearly 400 farm-to-retail markets in 28 states and D.C to encourage federal nutrition assistance recipients to use their SNAP, WIC and Senior Farmers Market Nutrition Program benefits at local farmers markets. These programs generate much needed revenue for small and mid-size farmers like Robert Schubert who sell their produce at these markets.
Year after year, Double Value Coupon Program data shows that the program is increasing sales for farmers. The additional revenue generated by the program is also allowing farmers to increase their farm or market staff as well as expand their operations, including diversifying their product offerings, adding hoop houses or greenhouses and increasing their production or acreage.
Gus Schumacher is Executive Vice President of Policy of Wholesome Wave and Co-Founder with Michel Nischan and the late Michael Batterberry. Earlier, he served Under Secretary of Agriculture for Farm and Foreign Agricultural Services at USDA from 1997 to 2001; Schumacher oversaw the Farm Service Agency, the Foreign Agricultural Service, and the Risk Management Agency. He was also president of the Commodity Credit Corporation. Prior to his appointment as Undersecretary, Schumacher served as Administrator of USDA’s Foreign Agricultural Service, worked as a senior agri-lender for the World Bank, and served as Commissioner of Food and Agriculture for the Commonwealth of Massachusetts.