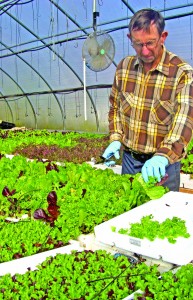 by Sally Colby
In 1996, Bernie Szarek and his family started growing greenhouse plants. Each year, they put their earnings toward a new greenhouse.
“We’re up to eight greenhouses now,” said Bernie’s wife Denise. “In the beginning, Bernie grew nursery stock, bedding plants and hanging baskets and sold wholesale to nurseries in the area. As those nurseries started to buy more product from Canada, it became harder for us to wholesale.”
The Szareks switched to retail, although that proved to be a challenge because the nurseries they had been selling to were all close to their Clinton, NY farm, and they were also competing with several big box stores.
Realizing that they needed other ways to become profitable, the Szareks started a CSA, known as Three Goat Farm, in 2010. Today, the CSA has grown to a 60-member, 16-week vegetable program that is already sold out for 2014. “We like the fact that customers come to the farm, meet us and know us,” said Denise, adding that they focus on heritage varieties and hybrids that they’ve grown successfully.
Although their vegetable CSA has been a local hit, Bernie and Denise wanted to develop the CSA concept further. “We encourage people to grow their own food in their own gardens,” said Denise. “For a lot of them, plant-starting is hard because they’re doing it on their dining room table or in front of a sliding glass door and the plants don’t get off to a good start.” That led to development of the Szareks’ plant-start CSA — a means by which home gardeners, whether experienced or new to gardening, would have a better chance of success.
“We have three models for the plant-start CSA,” said Denise, adding the patio garden and small family garden shares were the most popular last year. “We provide information on how to grow in containers, and how to use the containers they already have.”
Prior to signing up, plant share customers receive a list of varieties that will be grown, and can select what they want. “We give the quite a few choices, especially with tomatoes,” said Denise. “Right now we’re tweaking a few things for the plant start CSA so it will be ready before Christmas. One thing we learned is that we should scale back the varieties (from last year’s 27 tomato choices) and use the ones we know people will be successful with.”
By the time they’re ready for pick-up, tomatoes and herbs are in 4 in. pots, and others are in cell packs. To help customers succeed, the Szareks provide basic instructions for growing vegetables. “When we give them the cold weather plants (brassicas) on the first of May, we give them general planting instructions,” said Denise. “When they come for tomatoes and other starts the week before Memorial Day, they get instructions for each vegetable group.”
Some plant-share customers weren’t successful this year due to the rainy weather and heavy flooding in the area. “Most of them realized that it had nothing to do with things they could control,” said Denise. “If we had extra plants, we gave them to customers to restart.”
In addition to the plant start shares, the Szareks also fufill orders for custom seed growing. “We can do a tray of tomatoes or whatever they want,” said Denise, adding that a B&B owner wanted edible flowers to plant on the grounds. “We’ll also start heirloom seeds that families have saved.”
The Szareks sell produce at several farmers markets; three in winter and two in summer. One popular item at market is the Szareks’ own brand of salsas they developed from a family recipe. To prepare the salsa for market, they use the services of Nelson Farms, a processing facility at Morrisville State College. “We take about 100 pounds of tomatoes as we’re harvesting,” said Denise. “They chop and flash freeze them, then when we’re ready for production, we use our own tomatoes. We also provide the habanero peppers, and the other ingredients are sourced as locally as possible.” Denise says that either she or Bernie make a point to be present at production time to ensure the quality is consistent, especially at bottling.
Root crops for the CSA and farmers markets are grown outside in raised beds while and cabbage, summer and winter squash are field-grown. All other crops are grown in 15-gallon bags on black plastic in the greenhouses in either soilless mix or coir. Some crops, including fingerling potatoes, are grown in 5-gallon buckets with drip irrigation. The buckets are placed between the greenhouses to maximize space and minimize labor. The Szareks grow all of the lettuce for a local farm-to-table restaurant in Utica, and as they grow more greens for that market, they’ll be able to offer additional greens for the food CSA and farmers markets.
The Szareks recently had a unique opportunity to participate in a SARE (Sustainable Agriculture Research & Education) grant in cooperation with the University of Hawaii. Denise explained that in Hawaii, ginger growers are dealing with a form of bacterial wilt that’s similar to late blight. Because the bacteria remain in the soil for 10 to 15 years, researchers are seeking alternative growing methods. “They tissue culture clean ginger, raise it to seed stage, then grow it in high tunnels or coir or soilless mix,” said Denise. “This will give the fields a chance to rest and hopefully eliminate the wilt.”
For their part in the trial, the Szareks received 30 pounds of ginger to grow hydroponically.  “They projected a 160-pound yield from the 30 pounds of seed ginger they sent us, but we harvested 187 pounds,” said Denise.
The Szareks are also growing hydroponic turmeric, a crop that is related to ginger and is grown similarly to potatoes.
To keep customers informed about what’s going on at the farm and to provide ideas for using products, Denise maintains a Facebook page and a Pinterest page. Visit Szarek Greenhouses at szarekgreenhouses.com and Three Goat Farm at threegoatfarm.com