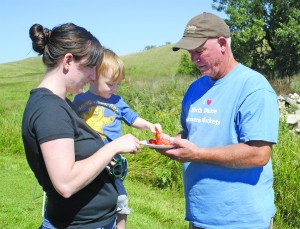 by Bill and Mary Weaver
Marvin Baker, of North Star Farms in Carpio, ND, supplies a CSA and attends the North Prairie Farmers Market in Minot, a market he and his wife, Ilene, started in 2007. The market, held on Saturdays, now hosts as many as 21 growers.
North Star Farms offers its customers a wide variety of vegetables, fruits, flowers, herbs, honey and legumes. Hard neck garlic, in about six varieties, is a specialty. “Although we’re only 40 miles from the Canadian border, we can grow root crops unprotected until late October most years. With protection, we can usually keep sweet potatoes, squash and tomatoes growing until late September.”
As a grower, Baker is dedicated to the idea that more of the food consumed in North Dakota can be, and should be, grown in North Dakota. He has been trying for years to push the envelope of what can be grown in the state’s climate. He has successfully grown such unlikely crops as peanuts, okra, sweet potatoes, Cascade hops and ornamental cotton (as a novelty).
Started in his solar greenhouse, the certified organic Red Foliated cotton matured this year. “We have cotton bolls popping out all over the place. We obtained the seed from Southern Exposure Seed Exchange. Everyone, even University of Minnesota professors, told me I can’t grow certain crops here,” said Baker, who takes such statements as a challenge.
Baker believes many unlikely crops can be grown in northern North Dakota. It’s just a matter of trying enough of the available varieties and figuring out the best growing methods. He has been doing variety trials on “southern” crops for some years, trying to find varieties that will thrive on the Northern Plains in an organic system. In some cases — his peanut trials, for example — he has been able to trial varieties from around the world. “I obtained the seed through the Farm Breeding Club from the USDA’s Germplasm Resources Information Network,” which will supply small amounts of seed to researchers.
The Farm Breeding Club is a branch of the Northern Plains Sustainable Agriculture Society, and Baker works with other members who are also interested in finding vegetables, fruits and legumes suited to his area. The Farm Breeding Club is not as much into breeding new varieties as it is into trialing what’s available but yet untried in the area. Baker and others also look for varieties that were bred or developed for North Dakota’s climate, but have been forgotten and underused.
This year, for example, Baker and five other North Dakota growers are trialing 20 varieties of tomatoes and peppers, in replicated trials, to determine their suitability for cold climate organic growing. The trials were funded by a Specialty Crop Block Grant from USDA.
Two varieties have already received good reviews from participants — ‘Lark’ and ‘Sheyenne’ tomatoes, both developed at North Dakota State University. They were featured and tasted at a field day held at North Star Farms in August.
At the end of the season, data from all six trials of the 20 varieties will be computerized. “We’re hoping the computer spits out some useful information, based on the data we’ve gathered,” continued Baker. The information will be available to interested growers by early 2015.
In his peanut trials in 2013, Baker trialed 16 peanut varieties, many from the USDA collection, from Africa, Japan, Russia and other areas. He had previously grown and harvested peanuts successfully at North Star Farms, but wanted to see what other germplasm was available that might be earlier or better adapted to his climate than the varieties he had been growing.
“There is a Peanut Bureau of Canada, with a dozen farmers in southern Ontario. But we’re almost 7 degrees higher in latitude than southern Ontario. The Japanese varieties definitely did the best in our trials.
“A number of varieties put out as many as 40 pegs per plant, but gave only about 12 to 18 harvestable peanuts in our climate. We have more work to do to find the right varieties and the best growing methods to make them pay.”
To that end, Baker recently constructed the first certified organic solar greenhouse in North Dakota. The greenhouse saw its first crop in 2012, which included started plants of a number of varieties of peanuts, to extend the growing season for this crop.
The 23×40-foot greenhouse is well insulated and sealed from the high North Dakota winds on its north wall. The greenhouse can easily reach 90 degrees Fahrenheit from solar gain on a sunny winter day when the outside temperature is only 10 degrees, but requires supplemental heat at night.
Baker learned carpentry as he built, working with relatives and a friend who had previously built greenhouses. They sank the footers deep, just before a flood from the nearby Des Lacs River, which gives Baker his excellent river bottom soil. The polycarbonate ends of the greenhouse help to stabilize the plastic structure against the prairie winds. “Three times, this greenhouse has withstood winds in excess of 60 mph. We built it right.”
Baker is also participating in a project funded by the USDA to test heritage varieties developed in North Dakota, focusing on 10 varieties available originally from the Oscar Will Seed Company of Bismarck. Catalogs from this company have been discovered dating back to the late 1800s, which include varieties Will obtained from the local Native Americans.
North Star Farms is the northernmost test plot involved in these trials. Successes so far include ‘Nueta,’ ‘Stowell’s Evergreen’ and ‘Early June’ sweet corn; ‘Banquet’ and ‘Arikara’ winter squash; and ‘Niagara’ cucumber, a 1930s variety that has outperformed numerous new varieties.