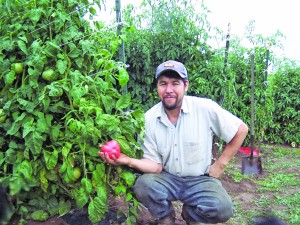 by Sally Colby
Joyce Haines wasn’t a farmer when she met her husband Greg Valdivia. She had gotten tired of her job and had 10 acres of blackberries on her Ridgefield, WA property, but wasn’t sure what to do with it. Greg, however, was a farmer and suggested they could do something with the acreage. Although the couple had been advised to grow nursery stock, they decided that vegetables would be a better option.

“He got it all cleaned up, and we started growing produce,” said Joyce. “He’s the worker and I’m the delivery girl. We started growing tomatoes, but didn’t want to just grow Romas, so we started growing heirlooms. Then Greg started to graft tomatoes, which has made a big difference in production.”
Joyce explains that the grafting process is complicated, but Greg enjoys doing it. “We get about one-third more tomatoes from the plants,” she said. “But it’s time-consuming and expensive because we have to start two different plants for each kind.”
After 10 years of growing and grafting tomatoes, Greg has a good idea of what will work. He selects varieties through trial and error, and keeps intricate records on the results of each cross. He starts seeds in December, and plants are large enough for grafting in February.
Northwest Organic Farms uses 10 high tunnels for the majority of tomatoes, with some grown outdoors. Joyce says the tunnels help prevent rain damage. Greg’s brother Ben and one part-time employee handle the farm work throughout the year.
Although it can be difficult to grow uniform heirloom tomatoes, customers don’t seem to be put off by the variety in shape and size.  “The large tomatoes aren’t great sellers at the stores,” said Joyce. “They’re too expensive when sold by the pound. We aim for quality rather than size.”
Greg grows 10 varieties of garlic, and has plenty of customers eager to purchase it. He plants in October/November and pulls it around July 4. “We made drying racks,” said Joyce. “They’re 4’ x 10’ long with a screen. Greg digs the garlic and lets it lay in the field if it isn’t going to rain. We have an open-sided shed with big blowers to dry it. He stacks the trays four high and places the blowers on each side.” Joyce added that they used to sell to some organic garlic seed to companies but found it was more profitable to focus on tomatoes. During garlic harvest, Greg’s mother comes up from Mexico and clips garlic for about eight hours a day.
In addition to tomatoes and garlic, Greg grows shallots, sweet peas, green beans, lettuce, kale, collards and mustard greens, and offers tomato starts to customers in spring. Northwest Organic Farms also has a 40-member CSA for local customers who like to come to the farm for a selection of fresh produce. Northwest Organic Farms sells produce to specialty grocers in Portland, Vancouver and Lake Oswego, and to the People’s Coop in Portland.
As far as why they are producing organically, Joyce says that Greg decided it would be good to be organic when they first started. “Organic production was becoming more popular when we started, so it made sense,” she said. “A lot of stores purchase from us because we’re certified organic. It makes a difference in the price we get.”
Toward the end of the growing season, Northwest Organic Farms holds a garlic and heirloom tomato festival. “We put up a large tent at on farm,” said Joyce. “About 10 master gardener volunteers come to cut up the vegetables and answer questions as people are tasting.” Greg offers to help those who are interested in learning about tomato grafting and general cultivation.
“We do it because people need to know about farming,” said Joyce, who volunteers to provide basic ag education in local schools. “Some kids who came to the farm had never picked an apple. I didn’t realize that there were kids who didn’t know any of this.”
Although Joyce never imagined herself as a farmer, she’s enjoying what she and her husband have built together. “Greg had a vision,” she said, “and he made the vision come true.”