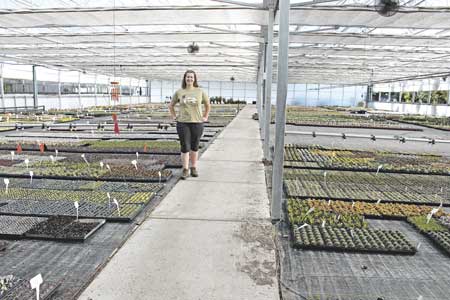 Owner Lorne Blackman, with a degree in forestry and experience at a local nursery and a large tree grower in Oregon’s Willamette Valley, first opened the nursery in 1992. What started as a small greenhouse with a desire to build up ornamental grass varieties has kept growing from there. Twenty-six years later, they now have 40 acres in total production, including 350,000 square feet of covered space, and grow over 3,500 total plant varieties, including ornamental grasses, herbaceous and flowering perennials, vines, shrubs, succulents, herbs and edibles, and new this year, annuals.

Walla Walla Nursery Company sells primarily finished plants, most of which are moved outside to become hardier in the Zone 6 climate, using both drip and overhead irrigation.

“If they do get frost at a garden center, they’ve already been exposed to it,” said general manager Terry Berger. They cover the outside plants in winter months but will watch the 10-day weather forecast and uncover them on mild sunny days. Walla Walla winters can be unpredictable — depending on the year, they may start bringing new plants outdoors as early as January or as late as March.

Their market focus is independent garden centers and re-wholesalers, who sell to landscapers and a few small chains, spanning Oregon, Idaho, Washington, Montana, Utah, Washington and Northern California and include about five local garden centers. Another 10 percent of sales come from liners they sell to growers in Canada and across the United States.

Most plants are started from unrooted cuttings and tissue cultures, and a small percentage by seed. The plants propagated through tissue cultures come to them in petri dishes of nutrient auger about the size of tubs of butter and are then planted into low-light tents within the greenhouse where they can acclimate with a higher level of humidity and are misted a few times a week before removing the tents.

The nursery keeps a close eye on trends and continues to expand their acreage. “For us as a company, we’re seeing a strong growth in shrubs, which is not necessarily true for the whole market,” said Berger. They began shrubs about four years ago and this year’s four-and-a-half-acre expansion was devoted to them.

They’ve also seen an increase in demand for edibles over the last couple years. “Edibles are huge right now — herbs, raspberries, blueberries,” said production manager Mike Richardson, who has been with the nursery for 13 years.

They also cater to the booming succulents trend, an unusual crop for the Pacific Northwest, but Blackman had a hunch five years ago that they would become popular, toughing out initial poor sales. “Now they’re all the rage,” Berger said. “You see them all over HGTV.” Karina Baker, assistant grower in charge of the succulents, said in the past they had about 300 different varieties. They are thinning them out now, but still devote an entire greenhouse to them.

Their peak season is April to July, but the nursery stays busy even during the shoulder seasons, with December as the only slow month. “We’re a little more diversified because we sell to re-wholesalers, who sell to landscapers,” said Berger. “If cities like Seattle and Portland are building, then a lot of landscapers are buying year-round, which gives steady sales.”

With 135 employees, seven of them are devoted to sales, which are primarily done online at the wholesale level for the last five or six years.

“A large percentage of our customer base is used to doing things online,” Berger said. “It’s easy — easy for them, easy for us. We can get the ball rolling.” The customer service team answers questions over the phone, but primarily work on processing online orders.

With sales of over 3.5 million plants annually, they rely on technology to help them process these orders efficiently. Orders are recorded on a pull slip with a bar code, which is scanned and then displayed on two television monitors in the cleaning center to keep track of where they are in the process.

The next step in their efficiency efforts will be incorporating the individual row’s plant labels into the system using Q codes, so that they can be scanned with smart phones and provide the same information found on the monitors.

Blackman is always looking for ways to innovate, said Berger. Blackman was unavailable for an interview because he was making a delivery. “As an owner he likes taking product to customers and to see how everybody is doing,” said Berger. “You don’t often get to know the owner of this size of operation, but he’s at the dock unloading plants. It’s his way of saying he really stands behind his product.”