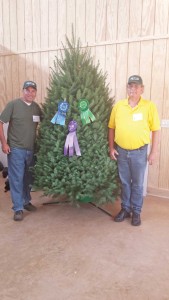 by Steve Wagner
At this time of year, one can almost hear the strains of O Tannenbaum sung by the University of Michigan Men’s Glee Club; they appear on the Mannheim Steamroller album Christmas Extraordinaire, as the preface to a Johnny Mathis solo. It is easy to imagine them standing in a curved stone stairwell in one of the college halls, the Christmas sounds ringing crystal clear with an echo of warmth.
Yes, tis the season! There is no date when the general public begins to get excited about the coming holiday, but the White House starts thinking about it early. Where do those White House Christmas trees come from? Well, this year’s tree is coming from Bustard’s Christmas Trees in Lehighton, PA.
Recently, Angela Reid, Chief White House Usher, along with White House Superintendent of Grounds Dale Haney and Jim Adams with the National Park Service were at Bustard’s because they had won the National Christmas Tree Association’s National Christmas Tree Contest back in July in Spring Grove, IL. It is the first time the Bustards have won; moreover, it is the first time they entered the contest.
“We have to win the PA Farm Show Christmas Tree Contest first,” Jay Bustard explained. “Then the two top vote getters at the Farm Show get to go to the National competition. We went out to Illinois in July and took a tree. My brother Glenn and I, and a fellow from Wisconsin were the two top vote getters there. So we got to donate the White House tree this year, and they get to donate the tree next year.” The trees in these contests are not necessarily the same every year. It depends rather on what the growers have to offer. “In the size the White House wanted, we only had the Fraser fir,” Jay said. The Blue Room, he learned, was 18-feet tall, so “they can give this tree a fresh cut if they want to make it fit. It will still go floor to ceiling.”
Is there any secret to growing such a sizeable tree? “It takes a long time. Another thing. We did a study. One of the problems we were having was that a lot of our baby boomer customers were getting older, yet they still wanted a big tree. But trees were too heavy for them to carry around. My brother Glenn and I started brainstorming about how we could grow a tree — same quality as the regular trees — with less weight. That’s one of the trees in that little research study we did. I don’t know exactly what that one [the White House tree] weighs, but I do know at 12-feet we weighed some out of that field and some out of our traditional field, and the weight of the ones in the field that they chose from were 40 percent less.
“They looked over four trees pretty thoroughly,” said Bustard. The White House, he said “is very particular about the tree they want. I think they picked a great one.” Christmas trees have been in the Bustard family for over 85 years when they began selling them at a small family run grocery store. The Bustards bought a Christmas tree farm in New Brunswick, CA in 1961.
“So far as agriculture goes in our family, we go back to 1837. We started with an apple orchard. In 1929 we started selling Christmas trees and we have been selling trees ever since. We actually started growing trees in 1961,” said Bustard. Jay and Glenn are now the third generation to run the business. On 60 acres of land, they offer ten varieties of trees, selling about 7,000 a year. They sell trees “mainly in the Lansdale area; we have four different farms. We don’t sell any retail trees. It is just a production farm where we grow the trees. On a regular basis, we drive up there (to Lehighton), cut a small truckload, bring it down and put it on our retail lot.” And when they need more, they drive up and repeat the process. That way, Jay says, the trees stay fresh.
Might a Bustard Farms Christmas Tree in the White House spark additional sales for them to the general public? “I don’t know,” he says. “Publicity never hurts, but we’ve never been selected before for something like this, so we don’t have a history on that. I really don’t know.” Besides the White House wanting a tree in the 19 foot range, they also want the tree to be 10 or 11, maybe even 12 feet in width; something nice and even on all sides. They want a tree that is symmetrically proportioned, too, so that it stands well. Like any other tree, they want a tree that looks presentable. The tree will be presented to First Lady Michelle Obama near the end of November so that holiday festivities can begin at the White House soon after. “It is quite an honor to have the official Christmas Tree in the most famous house in the country,” Jay Bustard said.