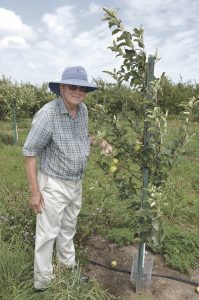 by Sally Colby
At Fireside Orchard and Gardens in Northfield, MN, Todd Harvey strives to provide a balance of old and new varieties, but his ultimate goal is to grow what works best in the region. Harvey started working on his grandfather’s truck farm as a youngster, and when his father started his own orchard in the 1970s, he worked with him.
The 30 acres of apples include both standard and semi-dwarf trees established in the 1980s, but Harvey is currently phasing out some of the older varieties and is in the process of planting new varieties suited for the Minnesota climate.
“There is a lot happening in the industry right now with both rootstock and varieties,” said Harvey. “It’s a very dynamic time. A lot of the new rootstocks sound great on paper, but to get any trees to plant can take years. For now, we’re sticking with traditional semi-dwarf, medium density plantings. We haven’t gone to high-density yet.”
Harvey noted that the focus of research at the University of Minnesota is usually on apple variety development. “In this state, we have an apple-savvy market and they’re very loyal to Minnesota varieties,” he said. “Honeycrisp was a hot thing, then SweeTango®. Every time people hear about a new variety, they want it, so we try to grow something for them.”
Traditional favorites grown at Fireside and frequently requested by customers include Haralson, Fireside, Regent, Keepsake and Prairie Spy. “One new variety is Zestar!®, an early season apple that’s very good, and SweeTango® is very popular now,” said Harvey. “Another new variety is MN 55, which is a crunchy apple that’s ready in August.”
Harvey noted that private growers and groups are also working on developing new apple varieties, including one called Pazazz. “Another is KinderKrisp, a variety developed by an independent Minnesota breeder,” he said. “It’s a smaller apple, and should be popular among kids. It’s very tasty and sweet.”
As far as what breeders concentrate on when developing new varieties, Harvey says that commercial success is probably the most important factor – especially when it comes to climate considerations. “Once we find out what we can plant, it takes years before there’s a significant crop to offer for sale,” he said. “People hear about new varieties coming out on the news, and I’ll be glad to sell them, but they have to come back in four or five years.”
For pest and disease management, Harvey strives for balance, and like any conscientious grower, uses as little pesticide as possible. Harvey noted that last season’s biggest issues included sooty blotch and flyspeck, but he managed those problems with minimal input. Harvey recalls that his father had significant problems with fire blight in certain varieties, and hopes that using resistant varieties for new plantings will help keep that issue under control.
His new packing line is simple but has improved efficiency. “Everything we pick goes through the line,” said Harvey. “If it’s for wholesale, washing and grading is desirable.” Harvey noted that the new equipment is computer operated, and is quieter and easier to clean. “Apples are washed, then float out of the water and go single file in a cup and weighed,” said Harvey. “They’re sent to the appropriate station depending on weight. We still grade for color and defects by hand, and bag them by hand.”
On-site cold storage ensures crisp apples throughout the season and beyond, and ensures an ample supply of apples for pies and apple crisp made on site. Fireside also makes caramel apples with their own caramel, and offers fudge and made-to-order pies for Thanksgiving.
Another big seller at Fireside Orchard is cider, which is made fresh from mid-September into January. Harvey says they are still using the original presses that were purchased in the mid 1980s, although they have made some changes to modernize the equipment and to include flash pasteurization.
The biggest factor that influences the flavor of cider is what goes in. “Whatever the variety is, it has to be ripe,” he said. “If you start with green apples, you aren’t going to get good cider. We use a blend of sweet and tart. Some varieties work well by themselves because they have lots of sugars and acidity. A Zestar!® makes good juice by itself, and if Haralsons are nice and ripe, they work well with Firesides.”
Fireside Orchard markets apples through a variety of outlets, including u-pick and its own retail store built on the premises in 1987. “With u-pick, you have to realize that there will be some people who won’t treat your orchard the way you do,” said Harvey. “We didn’t plan or plant the orchard with u-pick in mind, but the demand was excessive and we couldn’t continue to turn people away.” Most of the u-pick blocks are close to the farm stand, and customers can walk to where apples are ready for picking.
Although some of the u-pick blocks have been removed during the current transition period, there are still enough u-pick apples for customers who enjoy coming to the orchard for that activity.
Although Harvey has considered offering other farm products such as bedding plants and strawberries, he realized that the strength of the business was apples. “We have a nice pumpkin patch, but it isn’t a major portion of our income,” he said. “Pumpkins go with apples in the retail store as part of the fall experience. If we didn’t grow pumpkins, we would have to purchase them. But it isn’t large-scale production, and there’s a lot of hand cultivating and labor involved.” Fireside Orchard maintains a large garden area on the premises, which provides a relaxing area for visitors and a place to enjoy a fresh apple or apple treat.
Visit Fireside Orchard and Gardens at www.firesideorchard.com .