One fruit, one vegetable 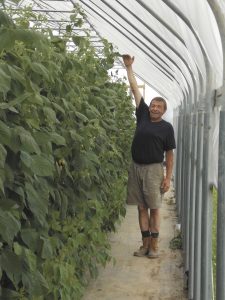 by Sally Colby
When Ann and Daniel Trudel moved to a Fredericktown, Ohio farm in 2004, they each wanted to grow a seasonal favorite. Daniel loves Brussels sprouts and Ann wanted to make raspberry jam like her mother and grandmother made. Although they had no experience in farming, they decided to establish a U-pick raspberry patch. In 2005, the Trudels put 1,500 raspberry plants in the ground.
The U-pick was successful, and Ann’s Raspberry Farm was an official business. There were enough berries to take to local farmers markets, and plenty for Ann to make jam, which quickly became a popular item on their stand.
After operating the U-pick for about five years, the Trudels started to look at other options. They constructed a 30 x 96 foot Gothic style high tunnel and planted Joan J raspberries. Tunnel construction included landscape fabric between rows, trellising and two layers of plastic over the frame. Daniel found research that recommended putting four rows in the tunnel. “I thought that was a lot of space between the rows, so I put in five,” he said. “But there was too much foliage. In the next tunnel, we planted four rows and it’s a lot more manageable.”
After trying several bed widths, Daniel found that 18 to 20 inch beds work best. He allows five feet between rows and about four feet at the end of the rows, which is ample space for air circulation. For those considering intensive high tunnel production of raspberries, Daniel recommends north-south orientation for the high tunnels whenever possible. There’s less sun damage on the south side, and the tunnel warms up faster in the morning.
“The production was unbelievable,” said Daniel. “The first harvest yielded over 2,000 pints of berries, so the initial investment was nearly recovered in the first year. The plants grew two feet taller in the high tunnel environment, and the berry quality was much nicer. We now have three high tunnels with a constant supply of berries for production.”
Daniel says that while Japanese beetles had been an issue with the field-grown berries, there are fewer beetles in the high tunnels. “But last year, we had spotted wing drosophila (SWD),” he said, noting they saw the first signs of the pest in early July. “We had an intern from Ohio State University last year and she was instrumental in helping us manage that.”
Daniel says alternating Entrust® and Grandevo® worked to manage the SWD. “But the solution is to pick berries every day, and sometimes twice a day,” he said. “The fly attacks the mature fruit, or just as it turns, so we pick those berries before they are attacked.”
When the Trudels realized how well raspberries grew in the high tunnels, they discontinued growing field berries. Although Daniel knew the tunnels were producing higher yields, he did the math to prove it. “We were field harvesting about 5,000 pounds per acre; which is slightly lower than the average northeast harvest,” he said. “In the tunnels, we’re getting about 24,000 pounds per acre, which is higher than average. That’s about five times as much.”
Ann obtained a cannery license and makes raspberry jam and related products at a commercial kitchen in Mount Vernon, Ohio. “I make seven products there, and will be adding two new products this year,” she said. “The raspberries for jam products must be picked and processed daily, so I’m in the kitchen every day from the end of June through fall.”
Raspberry pickers are trained to detect the presence of SWD. “Our pickers are trained to pick for market and for jam,” said Ann. “The remaining cone from a picked berry should be white, so if that cone has pink juice on it, it’s discarded. They also have to pick the berries to be disposed of — those have to be frozen for 24 hours before we can throw them away to prevent more issues on the farm.”
The Trudels didn’t put all of their efforts into one crop. The family loves Brussels sprouts, so Daniel planted 25 Jade Cross plants. “We started taking them to market,” said Daniel. “We trimmed every single one, packaged them nicely and got a high price for them. They were all gone, all the time. The next year we planted 200, then 300. They’re easy to grow, but one of the most difficult crops to harvest.”
Some of the Brussels sprouts are sold at farmers markets, but most go into Ann’s unique Brussels sprouts relish. “We made some, tweaked the recipe and introduced it at the farmers market as samples,” said Daniel. “It made sense to add a product that used Brussels sprouts. It includes five vegetables that we grow – green and red peppers, jalapenos and onions.”
“We entered that relish in two contests, and won the Central Ohio Signature Food Contest,” said Daniel. “That’s what propelled the relish.”
The Center for Innovative Food Technology provided one year of technical expertise and funding to help the Trudels further develop the product and market. They’ve also entered the relish in a San Francisco food contest, and won their category two years in a row.
Brussels sprouts are started from seed inside, under grow lights, in several succession plantings, then transplanted outside between April 1 and mid-June.
At peak production, the Trudels were growing 7,000 Brussels sprouts plants, which proved to be too many, but Daniel found a happy medium in 4,000 plants. He says growing them is fairly easy, even with the ubiquitous cabbage loopers. “There are about half a dozen on each plant, and if we knock them off, they don’t come back,” he said. “Entrust® works well for that. Aphids can be a problem depending on the year, and spinosad works for aphids.” Although the Trudels’ farm is not certified organic, it has been Certified Naturally Grown since 2004.