Organic herbs are the star at J & B farms 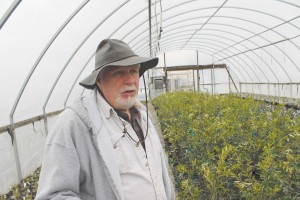 by Karl H. Kazaks
ROSEVILLE, NC — This past winter was no lightweight, with a number of storms visiting the Eastern seaboard with cold temperatures and precipitation. At J & B Farms, in the north central part of North Carolina, in the middle of the Piedmont, the extreme weather presented challenges unusual for their location. The nursery, a partnership between John Wrenn and Burton Edwards, typically experiences a milder winter climate. First, high winds blew the plastic off one of their 24 greenhouses (luckily, a cold frame). Then a long spell of frigid temperatures impelled the nursery to burn a lot of propane keeping their houses warm and their young seedlings growing. All but one of the nursery’s houses was full with herb and vegetables seedlings.
J & B’s has more than 200 retail customers that were expecting those plants for their spring inventory. A collapse of any of the houses could lead to loss and a significant setback in the early part of the new business and growing year.
To contend with the snow piling up on their greenhouses, Wrenn and Edwards turned off their puffer fans and turned up the heat in their greenhouses, to get the snow to melt more quickly. The houses could withstand a couple inches of snow, but more than that was falling. Snow was accumulating on the plastic. They use newly purchased snow removal rakes to get most of the weight off. Every two hours, one of two of them was out, checking on the houses, removing newly fallen snow. In the middle of the night, the lights blinked, but the power stayed on. Shortly before dawn, though, the power went out. Luckily, it returned a few hours later and Wrenn and Edwards inflated the houses. All the houses were intact, and the plants inside had survived.
A boiler in one of the houses, though, broke down, and stayed down for several days. Portable propane heaters were put in the house to keep the temperature warm enough for the plants inside. A week later, J & B pulled its first spring order. “We’re still trying to dry out from all the mess,” Edwards said.
J & B is a wholesale nursery that specializes in potted live organic herbs and vegetables, many in four-and-a-half inch pots but also in sizes up to one gallon and three gallons. It supplies over 200 independent retail landscape and nursery centers, some landscapers, as well a large number of Whole Foods stores and Ingles markets. It sells to customers within a roughly six-hour radius from its home, from the D.C. region to the mountains of western North Carolina and into Tennessee, all the way to the coast and to the south.
Wrenn and Edwards started the growing partnership (and it has grown) in 1996. At first, they focused on selling herbs retail, “from the back of an Isuzu truck,” said Edwards. But nurseries kept asking J & B to supply them. “Our business just totally changed,” Edwards recalled. “People wanted our stuff.” So the two decided to respond to the market and become primarily wholesale growers. Counting each variety of any one herb or vegetable (including a number of heirloom vegetables), the nursery grows over 150 types of edible plants. Though wholesale is the main focus of their business, J & B does participate in many spring herb festivals, from Asheville to Wilmington, NC, to northern Virginia. Most of the nursery’s greenhouses are 30’ x 75’, with some 30’ x 100’ houses and some smaller houses. Four of them have bottom heat, one has overhead lights and all have gravel pads. The nursery just installed two new greenhouses in November. “Every time you put up another house,” Edwards said, “you realize you could put up even more.” That’s borne out by the packed-to-the-edges spacing in their greenhouses, full to doors, in preparation for the flush of spring orders. “You run out of room all the time.” Even during the recession, there was demand for herbs and vegetables, as more people were planting gardens. Today, even people who don’t plant their own gardens are looking for herbs and plants. Landscapers, Wrenn and Edwards report, are buying more herbs and vegetables from their nursery than ever before.
J & B became certified organic eight years ago. “We were already almost there,” Edwards said, “so we thought, ‘Why not get certified?’” This year, the nursery has had to switch certifiers, when Clemson decided it would no longer certify operations out of its home state.
As with many organic growers, aphids can be a nuisance. To counteract the pest, the nursery keeps up with all the permitted organic chemicals and uses beneficial insects, including lacewings, lady beetles and parasitic wasps.
In addition to its organic production, J & B also grows each year about 3,000 one-gallon pots of scented geraniums and 9,000 10-inch pots of mums. While the nursery does get calls from customers looking for fresh cut herbs, so far the partners have not gone further than considering entering that business.
J & B does have some unique products, including organic kaffir lime and organic arbequina olive trees (sold in two gallon pots, the trees are hardy to zone 7). Each year J & B has been in business it has seen growth. “Every year has outdone the year before,” Wrenn said. “Even as we grow, we stay on top of quality. We have a reputation as being consistent and we’re going to keep it.”