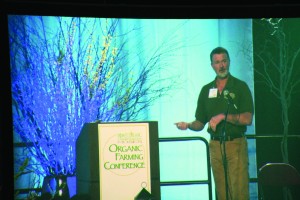 by Bill and Mary Weaver
Celebration was in order at the Midwestern Organic and Sustainable (MOSES) Farming Conference in February. The 25th anniversary of the conference brought remarkable growth. The 2014 convention attracted over 3,400 people from 43 states, including Alaska. Seven foreign countries, including four Canadian Provinces, were also represented.
The conference was held at the La Crosse Center in Wisconsin, and spilled over a bit into part of the Radisson Hotel.
On Thursday and Friday, 65 sessions were tailored to offer something to interest everyone. From pastured dairy, pigs, and poultry, to organic fruit, vegetable and flower growing, savvy marketing, the ins and outs of hiring labor, how to obtain organic certification, food safety, season extension, the uses of social media to contact customers, cover crops, green manures, composting, dealing with soil compaction, farm-scale permaculture, and even growing and selling organic mushrooms, were some of the topics covered.
The enthusiasm throughout the conference was palpable. A packed auditorium greeted the presentation of the 2014 Farmers of the Year and the three Keynote Speakers.
Faye Jones, executive director of MOSES, presided gracefully and with good humor over the larger sessions.
And then there were the extras: Farmers’ Roundtables, Ask an Expert, the Legal Corner, film screenings, a bookstore with over 500 titles related to organic farming, organic research exhibits, child care with fun activities, and teen space with craft workshops.
For those who came a day early, Organic University offered 6 1/2 hours of in-depth discussion on organic growing-related topics, with classes purposely kept small to facilitate class discussions.
The Trade Show featured about 170 exhibitors.
Needless to say, all the area hotels and motels for miles around were jammed for the event. The MOSES staff neatly solved what could have been a massive traffic jam and parking disaster by organizing and scheduling a fleet of shuttle buses to take attendees to and from their motels at regular intervals.
At the conference, many compliments could be heard on the quality of the sessions, the speakers, the events, the food, and the incredible organization provided by the MOSES staff and their many volunteer helpers.