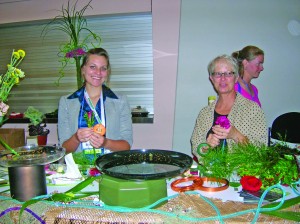 by William McNutt, DVM
The Ohio-based Ohio Floral Association, nationally known as one of the largest gathering in North America of industry and trade show professionals, completed their 83rd conference in Columbus in mid-July with both record attendance plus a sold out exhibit floor.
CEO Michael Geary informed a media luncheon that a possible name change is in the works, as a membership this summer is expected to complete the merger of American Nursery and Landscape Association and OFA, with Geary as chief executive. He said the new organization will become the world’s largest trade association of independent garden retailers, and offer many additional retailing opportunities. Next year the convention will offer 50,000 square feet of additional exhibit space, plus additional Short Course classes offered to the expanded attendance.
Several class sessions concentrated on additional greenhouse growing of small fruits and vegetables, for wholesale or retail sales, after traditional floral crop harvest is ended. Direct sales to the public are expanded, use of building space can be offered for conference and catering to general public or organizations. One New Hampshire market reported selling weekly space to direct market vendors, another offered products grown on their site for such occasions. Sessions on hydroponic culture, especially adapted to urban agriculture, were well attended. Increasing emphasis on fresh and local production of food crops grown within driving distance is becoming the norm, particularly in more affluent residential areas and among the younger generation.
The perennial rivalry between so called Big Box Stores and Independent Garden Centers shows signs of agreeing to disagree; a panel of two growers who sold to and/or operated IGCs and two who sold to the super centers showed sign of cooperation rising to the surface. They expressed joint efforts to attract the millennial generation, how social media benefits both types of sales outlet, plus gave a recommendation to work together by letting grower representatives be Big Box vendors, not store sales associates who know little about flowers or can give advice on cultural questions. Both groups rely on agricultural college and privately funded research; both need to coordinate with plant breeders to obtain varieties that are disease resistant and have longer life. All agreed that plant names need to be in English, not the Latin varietal designation. Some concern was expressed about cutback in numbers of suppliers by major marketers, feeling that it might stimulate those cut off to more directly compete with IGC.
One half day session was devoted to reports from urban greenhouse centers. Cleveland Green City Growers was formed as a cooperative to develop local food sources in former abandoned industrial sites now turning into low income population centers. Last year this cooperative produced a million heads of lettuce, and has hired a sales director and 25 employees. Planned expansion will double hydroponic production and will eventually need up to a thousand employees. Similar set ups in New York City and Arizona University were discussed.