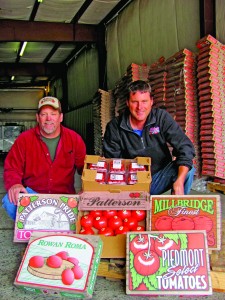 by Karl H. Kazaks
CHINA GROVE, NC — “We saw the writing on the wall,” Doug Patterson said.
It was 2005, and as growers of 350 acres of tomatoes, Patterson Farm — a partnership between Doug and Randall Patterson and their wives Michelle and Nora — was being buffeted by a changing marketplace. Input costs were increasing and tomato prices were going down, thanks largely to pressure from Mexican growers. A business that used to be profitable was souring. Something had to be done to save the farm operation.

The brothers were prepared to adapt in the face of adversity. They had the example of their grandfather, James A. Patterson, who experienced his own transformational challenges in the middle part of the 20th century.
James A. founded the family farm in Rowan County as a row-crop operation in 1919. Cotton was a major crop. When boll weevils became a problem, he had to do something different, so he started growing tomatoes. By the 1930s he was selling tomatoes in bushel baskets to A&P supermarkets. Growing tomatoes proved to be a good business, sustaining the family for decades.
“We were into tomatoes big,” Doug said, even growing on rented farms in South Carolina. “Then all of a sudden free trade was hammering us.” The Pattersons had to shift gears.
Customers had been asking the Pattersons if they could provide produce year-round, so during the changing market in the last decade the family decided to start repacking tomatoes. They hired a repack manager and opened the repack side of their operation in 2007.
Since then, the bulk of their business’ growth has come from the development of their repack operation. They repack primarily tomatoes — round slicers, grapes, cherries and Romas.
In the depth of winter, Patterson Farm will source tomatoes from Mexico, but as soon as possible they’ll repack tomatoes from Florida. As the season progresses, they buy from growers in Alabama, Georgia and Tennessee, using their own tomatoes when they become available. Then they’ll work their way back south to Florida.
“We always buy as close to local as we can,” Randall said. That helps with today’s consumers, he said, many who prefer locally grown food.
The farm’s customers are almost entirely in North Carolina and are mainly grocery store chains including Food Lion, Harris Teeter, Walmart and Lowes Foods. The farm does participate in PrimusGFS certification and is GAP certified.
While developing their repack business the Pattersons have also diversified into other crops. In addition to 200 acres of tomatoes (up from a low of just 100 acres but still off their decade-ago peak), they grow 150 acres of bell peppers, 60 acres of long green slicing cucumbers, 40 acres of watermelons, 40 acres of strawberries, some jalapeños  and 10,000 poinsettias.
They’ve also started double cropping, following tomatoes with cucumbers or watermelon. The strategy allows the Pattersons to increase the return they get from their investment in black plastic and drip tape.
“Our costs in North America — direct and indirect — are higher than in Mexico,” Doug explained. “When labor is your highest expense, you’re at a huge disadvantage when you’re competing against a market where the labor cost is one-tenth what it is here.”
In the same way that double-cropping increases the operation’s efficiency, so too has the development of the repack business increased the farm’s efficiency.
In addition to their horticultural operations, Patterson Farm also does a robust business with school tours. They have a corn maze, a pumpkin patch, hay rides, pig races, a tomato launch, face and pumpkin painting, a geocache course and much more.
“We try to add something new every year,” Randall said.
They also have a landscape and nursery business, but that hasn’t yet recovered from the economic downturn. They have 20 acres of nice trees — maples, oaks, and birches, in sizes up to eight inches.
Because the Pattersons farm on red clay soil, they make two passes when forming beds. On the first pass they’ll form the beds high, then come back and compact it, hopefully eliminating most of the clumps along the way.
All of the farm’s production is irrigated.
“We started with one acre of steel irrigation pipe in the 1960s,” recalled Randall. They then moved to solid set aluminum irrigation, before moving to drip irrigation in the 1980s.
Because the soils on the Pattersons’ farm are red clay, when it is wet in the springtime it can be difficult to get out and work the fields. Because of that, the Pattersons will prepare about a quarter of their tomato fields in the fall, forming beds and laying plastic and tape. They plant annual ryegrass between the rows, which they’ll spray with selective herbicide to provide mulch.
Putting the plastic out in the fall is “a lot of investment,” Doug said, but it works in their terrain, where there’s not much flooding. The biggest hazard, Doug added, “is keeping the deer off.”
The farm uses self-propelled sprayers to apply herbicides, but has an Airtec Airboom sprayer it uses to spread fertilizer, insecticide and fungicide. The sprayer, which is 75 feet and can cover 16 rows, also ionizes the water. With that system, what used to take 100 gallons per acre now only take 30 gallons per acre. What’s more, the sprayer can cover 150 acres per day.
The farm does use beehives to help with tomato pollination, and will use boxes of bumblebees for greenhouse tomato production. It is also stating to experiment with grafted tomatoes, which promise to be more resistant to blight and bacterial wilt, more vigorous.
In addition to field production, the farm has about a quarter acre of greenhouse production. They use some of the houses for extended season tomato production. In others, they start tomato seedlings, both for themselves and for customers. This year they started 3 million seedlings for themselves and almost that many for customers.
Once the seedlings are gone, the Patterson use the greenhouse they grew in to grow poinsettias. They place their poinsettias a little farther apart than is conventionally done in commercial greenhouses. That helps them get even bigger and bushier. They sell their poinsettias to local businesses and churches. They add value by delivering the plants and hand wrapping them.
As much as the Pattersons’ operation has changed in recent years, the brothers know they’ve got to be nimble.
“We learn something new and different every year,” Randall said. “We try and progress.”
“Like everything else,” Doug said, “you have to constantly evolve.”
A lesson the Pattersons know well, both from their own recent experience and examples from previous generations.