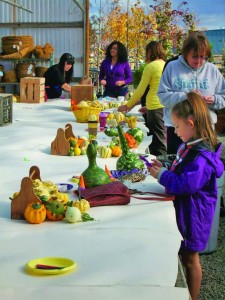 by Kelly Gates
Don and Sharon Patterson’s passion for plants was the commonality that connected the couple many years ago. The husband and wife first met in Washington where they both took jobs at a plant supply company.
After working there, falling in love and getting married, the Pattersons decided to open a growing operation of their own and in 1989, they established Patt’s Garden Center of Clarkston, WA.
According to their daughter Kate Patterson, Patt’s Garden Center currently serves customers throughout the Lewis Clark Valley and neighboring communities within a 70 to 100 mile radius.
“Originally, the garden center sold bedding plants, vegetables and nursery stock on a six acre property just down the road from here,” Kate told Country Folks Grower. “Eventually, the business was moved to the four-acre parcel where it is today and evolved to include a larger retail division and a wholesale operation too.”
As part of the relocation process, many of the greenhouses that the Pattersons erected at their original site were taken down and rebuilt. Several more structures were added as production houses, bringing their total number of growing greenhouses to nine.
According to Don Patterson, the company has both greenhouses and cold frames which are covered with double layer poly. Each of the cold frames has rollable sides that were specially designed by the Pattersons to allow for better cross-ventilation to help with disease control.
A flat filler is used for bedding plant and vegetable production and once established, all of the flowers, vegetables and other material inside the greenhouses are fertilized using a constant 200ppm liquid feed with a Dosatron injector.
“The greenhouses have Acme fans with Wadsworth controls on the automatic louvres as well as ceiling fans for ventilation and air circulation during colder periods,” said Don. “Our plants are grown mostly on the ground for bedding plant and vegetable production. Four-inch production is done on benches and in the retail space, all plants are displayed on benches for customer convenience.”
Two additional greenhouses serve as retail display spaces. These, he said, are adjacent to the retail store, which houses all of the company’s giftware, chemicals and related gardening supplies.
Customers come out to Patt’s Garden Center throughout the year to peruse the retail store for hard goods and the greenhouses for plant material. They also visit the site as active participants in the numerous classes offered by the company.
“Lewis Clark State College is just across the river from here and we offer four to five classes per session through the school which are part of LCSC’s Continuing Education non-credit program, which brings in a lot of students and members of the surrounding communities,” said Kate. “We have a hanging basket class, stepping stone decorating classes and we have a woman come in from Idaho with the gourds, squash and pumpkins she grows and teach little kids how to make monsters and other creatures out of them.”
Another class has attendees arranging 15 plants inside of a large spherical base for $75 per person. A similar class centered on upright rectangular-shape planters — complete with coco filling and wire exterior — costs $100 per person.
According to Kate, there were eight participants in the $100 class the first time around and the company expects more this year.
Another local craftsperson heads a fairy sculpting class, teaching participants how to mold a decorative fairy for their miniature gardens. Patt’s Garden Center then hosts a fairy garden session that allows people to pick two figurines, a container and several plants, with instructions on how to put everything together in an aesthetically pleasing way.
“We also have a customer appreciation event each year in the fall, offering discounts on everything on a Saturday and Sunday.”
While many garden centers have such events in the springtime, the Pattersons specifically chose September in order to breathe new life into their business during a time when customers typically slow spending on landscapes and gardens. They naturally come out in droves in the spring, she noted, adding that an appreciation sale in the fall entices them to come back one last time, lengthening the season for the company and inspiring customers to plant in autumn when most forget that there is still time for such things.
With such an all-encompassing operation under foot, Patt’s Garden Center is well situated for the future. The only major adjustment in upcoming years could be the addition of several more wholesale greenhouses.
“We have been selling to small, independent garden centers and to grocery stores for a while now, but we have also started selling a lot more plant material to churches and other associations that do plant sales in the spring as fundraisers,” explained Kate. “We are considering adding two more greenhouses to our production area to accommodate this growing division.”
Don also hopes to incorporate an automatic boom watering system into every one of the greenhouses at Patt’s Garden Center someday.