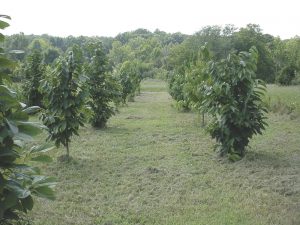 by Katrina Weaver
Pawpaws, the country’s largest edible native fruit species, are gaining in popularity with consumers, and if your CSA or local farm market needs something different to appeal to customers, pawpaws may just be the ticket. Pawpaws are a local delicacy. They store only two to three days at room temperature, and about two weeks refrigerated once ripened. They have a delicious tropical flavor and unique appearance that make them a specialized product that chain stores and shipping companies can’t easily sell fresh.
In the 1980’s when Neal Peterson was a graduate student at West Virginia University, he tasted his first pawpaw and wondered why they weren’t in the supermarkets.
Peterson cultivated and bred pawpaws as a hobby. He collected seeds from many different areas to plant 1,500 experimental seedlings in 1981. From those 1,500, he selected six superior seedlings and named them after American Rivers: Allegheny™, Potomac™, Shenandoah™, Susquehanna™, Rappahannock™, and Wabash™. Peterson chose them on the basis of smaller seeds, larger fruit, smooth flesh and sweetness.
In North Carolina, Carl Cantaluppi, NCSU Cooperative Extension, established a replicated regional variety trial of four of Neal Peterson’s pawpaw varieties. Last year his trees were seven years old. “Susquehanna,” says Cantaluppi, “is my favorite because I think it has an excellent balance between sugar and astringency. When you combine the large size with the rich pawpaw flavor and great sweetness, it is an exceptional variety. The fruits weigh over a pound and have the fewest seeds of any variety, 3 percent by weight.” Susquehanna ripens later in the season.
Shenandoah, which Peterson says has been the favorite at his Washington D.C. farmers market is one of the largest and most flavorful pawpaws. “It has a large size with few seeds, 6 percent by weight,” Cantaluppi says. “The flesh is firmer than wild pawpaws, with a sweet, mild flavor. The fruit is often borne as single fruit rather than in clusters. Shenandoah has a good yield of excellent tasting fruit of excellent size.” Shenandoah ripens mid-season.
When considering pawpaws remember that due to their uniqueness, flavor and perishability, they can be sold for a premium price.
Pawpaws grow best in USDA hardiness zones 5-8. The pawpaw belongs to the only species in the tropical custard apple family that is adapted to colder conditions. Pawpaws need some cold weather to break their dormancy, plus 160 frost-free days.
A big part of growing, harvesting and selling pawpaws is getting them started right. Bud break is the best time for transplanting trees. Planting on a protected hill helps prevent frost damage due to good air drainage.
For the best fruit, it is wise to start with grafted trees two years old or older. Plant two varieties for cross-pollination.
Soil should be well drained, with a pH that is moderately acid to neutral.
Trees should be spaced eight feet between trees and 18 feet minimum between rows. This makes approximately 295 trees per acre. Trees should be irrigated for the first two years. The trees benefit from a liquid soluble fertilizer mix, preferably 20-20-20, every four weeks till the end of June, according to Cantaluppi.
Interestingly enough, pawpaws don’t have many pests. Their leaves and bark have some insecticidal properties and they are deer resistant.
One pest that is not deterred is the pawpaw peduncle borer. The caterpillars burrow into the dark maroon flowers. “In our orchards, the peduncle borer is insignificant. We think it has natural predators controlling its population,” said Neal Peterson. Another minor pest is the zebra swallowtail butterfly, which lays eggs only on pawpaw leaves. When the eggs hatch, the larvae chew on the leaves. They are not reported to be a serious pest. Pruning the canopy can promote air circulation to minimize unsightly fungus marks on the fruit.
Pawpaws are pollinated by flies and beetles, which don’t do a very good job. And the downward facing flowers make them more difficult to pollinate. A time-consuming solution to this problem is to pollinate them by hand.
Depending on the variety and your location, pawpaws ripen between mid-August and mid- October. Planting several different varieties that are early, mid and late ripening can extend your harvest season considerably, according to Peterson.
Fruit color is not a good clue to ripeness. Many pawpaws stay the same color even when they’re ripe. A ripe pawpaw will feel slightly soft to the touch, similar to a ripe peach. You can twist a ripe fruit gently off its peduncle.
The best stage for picking pawpaws is when they are slightly soft, but not fully ripe. “Let them soften on the tree,” said Carl Cantaluppi. “I found that out first-hand when the wind blew an unripe fruit off the tree, and it never ripened. It just rotted.”
For more information visit www.pawpaw.ksu.edu or www.petersonpawpaws.com