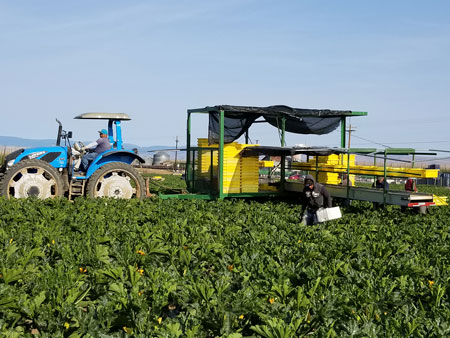 Being a farmer of any sort takes an uncommon amount of toughness and tenacity. And then there are farmers like the Inaba family.

The relocation and internment of over 120,000 Japanese-Americans by the U.S. government during World War II is a well-documented injustice. Less well known are the overabundance of alien land laws enacted in the late 19th and early 20th centuries. Alien land laws were a concerted legislative offensive aimed at stymying Asian and other “non-desirable” immigrants from settling permanently in the U.S. by thwarting their ability to own land and property.

It was into this political climate that Shukichi and Tomoji Inaba found themselves when they relocated at the turn of the century from Kumamoto, Japan, to Wapato, WA, searching for a better life. They first found work using horses to clear the land of sagebrush and as manual laborers helping to construct early irrigation canals.

Despite the adversity they encountered from the aforementioned alien land laws and time spent in internment camps, the Inabas were steadfast and resilient. The result is a successful business that specializes in growing, packing and shipping various fresh market vegetables throughout the Pacific Northwest and Canada.

Shukichi’s son Ken took over the farm in the 1950s. Today, the farm is operated by the third generation of Inabas, consisting of siblings Lon, Wayne, Norm and Diane. “Our 90-year-old mother, Shiz, still stops by the office every day to lend her guidance,” said Lon, the farm’s operations manager. “I’m 64,” he laughed, “so I  guess I’ve been working here for over 60 years myself.” Lon’s son Kenny is also on hand and makes the fourth generation of the Inaba clan to work the land.

Lon described the breadth of the family operation: “We currently farm 500 acres of organic and 1,000 acres of conventional produce on the Yakama Reservation in the Yakima Valley of Washington State. (The entire farm is within the borders of the Yakama Indian Reservation.) Our harvest season begins in April with asparagus and ends when we ship out the last of the winter squash and onions near the end of the calendar year. We begin once again in February as we begin preparing the ground and seeding new plants into the greenhouses for the coming year.”

The hard work the Inabas have put in over the past century has yielded both success and expansion.

“We began a Washington State Department of Agriculture (WSDA)-certified organic operation in the early 1990s with a small 35-acre block of Concord grapes and have expanded the organic operation over the years. We have a large scale composting operation…drip irrigation, nearly 100 owl, bat and raptor boxes…and multiple implements for minimum tillage and mechanical cultivation,” Lon said.

The mix of crops produced allows Inaba Produce Farms to enjoy an extended growing season. Consequently, this can mean longer and steadier employment conditions for their workers. The Inabas strive to be socially responsible employers. Never having forgotten the struggles their family had in getting their foothold in America, they make every effort to take care of their workers, many of whom are new to the U.S. One way the Inabas take special care of their employees is by providing housing for their workers. Lon is proud to say, “We have licensed on-farm housing for around 100 farmworkers.”

As with every farm, Inaba Produce Farms faces its challenges. Last winter proved unseasonably long and cold, pushing back the growing season for several of their crops by more than a month. But the Inabas have certainly weathered worse, and their family’s pride and perseverance always win out. “We’ve been through a lot,” said Lon. “We’re not going anywhere.”