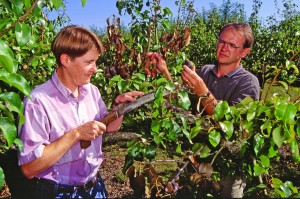 by Bill and Mary Weaver
Changes are in the works for western pear growers: in recommended rootstocks, in growing methods, in harvesting methods, and in marketing. “Several rootstocks have performed reasonably well under western U.S. growing conditions,” according to Rachel Elkins, pomology farm advisor for the University of Californi Cooperative Extension in Lake and Mendocino Counties. “OHxF87 is the most widely adopted of the ‘new’ rootstocks, which are more precocious and somewhat smaller, although they don’t necessarily maintain good fruit size as they age because the rootstocks are less vigorous.

There are no widely available rootstocks for pears like M9’s in apples. They’re more like M111’s. “Unfortunately, rootstocks with size control and good fruit size that the Europeans seem to get with Quince are still not available to U.S. pear growers. We’re looking forward to going into genomics and genetics to raise the potential of cultivars and rootstocks,” Elkins added.
According to Elkins, pear researchers are also working to manage the canopy to maximize light, by using reflective fabrics to increase fruiting, for example.
Hopefully U.S. pear production, which has been on the decline in recent years, may start to increase again. This is more likely, according to Elkins, when growers can adopt mechanized methods of harvesting. Trees on smaller rootstocks are more amenable to machine harvest.
“But growers have been very reluctant to capitalize on machines so far,” said Elkins. “For example, even though the Spanish-built Argiles AF-8 platform harvester that was tested for several years in Lake County (California) achieved six bins per worker per day, that was still not enough to take workers off ladders. We eventually need to go from ladders to machines but this will take a lot of work and investment.”
There are very few pear orchards being replanted. “Where wine grapes are an option, it’s easier to find workers to work in a vineyard than to work on tall ladders in a pear orchard.”
In Yakima, traditional tree fruit country, wine grape plantings are also increasing. More acreage being planted in cherries and Honeycrisp apples is also cutting into Washington’s pear acreage. Only Oregon has seen a slight increase in acreage in recent years, in the Hood River area.
Plantings of certified organic pears, with the most acreage in Washington, and about 500 acres in California, have also been cut back in recent years because “pest management is more difficult than expected,” with some of this acreage returned to conventional production.
For example, “weed control is difficult and quite expensive for organic pears, and providing fertility for organic pear orchards is also quite expensive and challenging. The pear psylla has proved difficult to control in Washington, as has the pear slug and pear scab in California.” Also, organic growers will not be able to use antibiotics after the 2014 season so fire blight control will be more challenging.
Although d’Anjou pear production is on an upward trend in the Northwest, d’Anjous have a somewhat cyclical production. This variety has a little more tendency to alternate bearing.
Although California used to produce dried pears, virtually all dried pears in the U.S. are now coming from Argentina. “This is an important loss for us. Dried pears are a high value product. But it’s simply more expensive to dry pears in California than it is in Argentina.
Most of the pear market is domestic, but in the U.S., pear consumption is dismally low. “Domestic sales are flat or declining. The average per capita consumption of pears in the U.S. is about 3 pounds a year. Assuming one pear weighs about 1/3 of a pound, that is not many pears,” said Elkins.
But there are still a lot of pears growers in western U.S. There are 1,600 growers and 50 packers and shippers working with the Pear Bureau Northwest, for example, which distributes their pears under the “USA Pears” brand.
Currently, bearing acreage in Washington is 21,500 acres, with half in d’Anjou; Oregon has 16,200 bearing acres, and California has 14,000, with 10,000 of those in Bartlett and most of the rest in Bosc. (No d’Anjous are grown commercially in California, according to Elkins.) All in all, including New York, Pennsylvania, and Michigan, the total U.S. pear crop in 2012 was 858,000 tons grown on about 54,000 acres.
“Most of the U.S. industry is about d’Anjou and Bartlett,” Elkins continued.
But there is a market for more. Canned pear imports increased dramatically starting in 2001, but have leveled off and even declined slightly now. Cheap imported canned pears from China and Thailand account for most of the current imports.
“In California, we need all of our pear markets. Our processors are very important to us. Because of the declining acreage and tonnage, as of the end of 2013, California was in a virtual balance between fresh market pear sales and sales to processors. There is more and more competition for a more limited market, which is good for the growers but indicates how fragile the supply and demand situation is right now,” said Elkin.
Imports make up about 20 percent of the U.S. fresh market. Since 1997, U.S. pear growers, especially winter pear growers, have had tremendous competition from Argentina, particularly from the Rio Negro production area, which is dry, and produces clean fruit. Chile was a major player for a while, but Argentina was able to overtake Chile, which has moved more to other fruits which have a higher price potential.
But fortunately, the trend, though up on both exports and imports, is steeper toward exports than the trend toward imports. Exports have increased 16 percent since 1997. The ability to use 1-MCP has led to more successful shipments of Bartletts overseas and opened up new markets in South America, Scandinavia, Europe, Russia, and Taiwan.
Elkins sees the future of mechanical harvesting as ultimately bright.
As Elkins explained, “The biggest problem with machines is that they cannot match the productivity of the fastest pickers, and they are not efficient for large-statured trees.”
At UC Davis, Dr. Stavros Vougioukas, in the Department of Biological and Agricultural Engineering, is developing software to do digital mapping of the fruit on a tree. “We hope the machine harvester manufacturers will use it to develop machines amenable to pear canopies.”
In the future, both pear production and harvesting could be very different from the situation we have today.