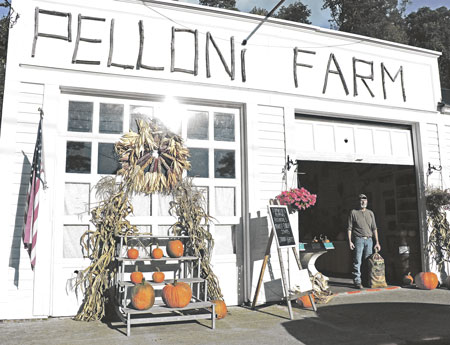 HINSDALE, NH – The days might be getting colder, but there’s still wood to be cut to get ready for next spring’s maple sugaring season at Pelloni’s Farm Market. Maple syrup, corn, tomatoes, cucumbers, peppers, winter and summer squash and jam are just some of the items that Greg Pelloni sells seven days a week at his family-run indoor seasonal vegetable farm market.

Besides eight acres of corn, he grows potatoes and garlic on half an acre. There are two 30-by-60 feet high tunnel hoop houses filled with tomatoes that are ready when the corn is, from mid-July until the end of September. He keeps selling until he doesn’t have any more tomatoes or corn to offer. He usually keeps the market open until Columbus Day weekend, but this year they were cleaned out of the last of their corn on the last weekend of September.

“Everything came in early due to the early hot weather,” said Pelloni.

He also sells pumpkins, but had fewer to offer than usual because “the deer did a job on the pumpkins,” he said. “Deer eat watermelon and pumpkin. They love cantaloupe – you bet – and winter squash.”

Loyal customers have been dropping by the farm market since it opened in in 1988.

“Eighty-five to ninety-five percent of our customers are locals that come every week from Hinsdale, Brattleboro [VT], and Northfield [MA]. We have a lot of regulars,” Pelloni said.

His wife Susan works full-time off the farm but works in the market on weekends in season. She also makes the jam, following a tradition of jam making started by his mother. She follows some of his mother’s recipes for strawberry rhubarb, blueberry, strawberry and peach jams as well as a combination of flavors.

Greg Pelloni’s father, John Pelloni, bought the farm in 1967. “He knew it was good land because there had been two tobacco barns on the farm before him,” said Pelloni. His father purchased 120 acres of fertile river bottom land, as part of it was nestled on the banks of the Connecticut River. He ran it as a dairy farm until 1987, called Pelloni’s Farm. At the dairy’s highest point they milked up to 90 cows. 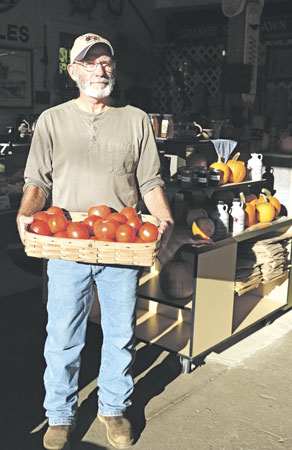 “We rented almost all the tillable land available that we could rent back in the ‘70s, in the early dairy farm years, to supply food for the dairy,” said Pelloni. He and his brothers grew up on the farm.

The land had been farmed since the 1800s, he noted. Inside the farm market garage building that dates back to the early 1930s, there is a horse-drawn milk wagon in storage that had once been used to deliver milk in bottles.

Black and white photos of the building under its former incarnations as Spencer Brother’s Ford Dealership and Summer Mobiloil from more than half a century ago hang on the wall. There is an “old-time” and welcoming feel to the farm market that makes it appealing to customers.

After John Pelloni sold the cows in 1987, Greg Pelloni started raising vegetables and sold them at their newly opened Pelloni’s Farm Market in 1988. The farm used to be dissected by the highly traveled Route 63, but when his father and mother wanted to retire, they sold the riverside land across the road. Now the farm has 42 acres that sit on a plateau, but still near the river. Some of it is wooded.

“My dad still does what he can do for his age,” said Pelloni, as he is 91. He helps his grandson, Greg Jr., with the potatoes. Greg Jr. also manages the sugaring. Last spring was his second season. He has a couple hundred taps, and produced 50-plus gallons of maple syrup. He also manages the hoop houses.

What advice does Greg Pelloni have for fledgling farmers? “You can do everything right, but Mother Nature’s the boss; she can make you or break you,” he answered. “You bet.”