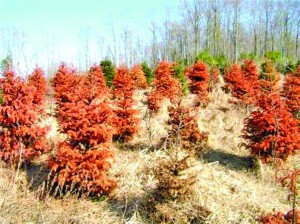 by Karl H. Kazaks
The bane of phytophthora root rot is familiar to Fraser fir growers.
It’s familiar to producers of non-Christmas tree woody ornamental trees and shrubs, as the soil-borne water mold can affect a variety plants including azalea, dogwood, rhododendron, and boxwood.

In fact, the phytophthora genus is host to a number of economically damaging species. “There are lots of different phytophthora,” said Betsy Lamb, ornamentals coordinator for New York State’s IPM program (based at Cornell).
For example, potato blight is caused by phytophthora infestans. That caused famines in Ireland and elsewhere Europe in the 1840s, driving many to emigrate to the U.S.
The general public, however, is mostly not familiar with phytophthora root rot. So recent phytophthora-related coverage in major media has caused some confusion in the public.
Consumers need to know that they run no risk of being infected.
As Christmas tree growers know, by the time you notice a tree is infected with phytophthora, it is typically either already or almost dead — a specimen for the burn pile, not a saleable tree.
It may be that some parts of the country are experiencing higher rates of the disease due to greater frequency of large rainfall events, which can lead to more standing water and more movement of the mold.
“Phythophtera needs water in the soil to be able to move,” said Lamb. “Once it’s in the soil, it stays there.”
But the existence and prevalence of the diseases is not new. Nor is the most effective strategy to avoid the problem: don’t plant Fraser firs in poorly drained areas.
What is new is a multi-university effort to study the disease.
Last year the USDA’s Specialty Crop Research Initiative awarded a $1.3 million grant to study the root rot problem as well as needle fall in Christmas trees. The effort is being led by Washington State University’s Gary Chastagner and North Carolina State University’s John Frampton. Other institutions like UC-Davis are also involved.
There are some fir species — like Turkish fir — which appear to have better resistance to phytophthora than other firs. Researchers are looking to see if they can find genetic markers for phytophthora resistance (and needle retention) in those species. If they are successful, they may be able to breed phytophthora resistance into firs like Fraser and Noble, which are more susceptible to root rot. (They could also breed needle retention into Christmas trees.)
Even if a more phytophthora-resistant Fraser fir can be bred, though, Lamb said, will it still have the desirable qualities we expect from a Fraser? The new line will have to be tested to see how fast it grows, to measure whether it’s cold tolerant and buds at a seasonally appropriate time, to see what kind of shape it gives. And that of course will take years. So there is no quick and easy answer.
In the meantime, growers can continue to avoid planting Frasers where their feet get wet. It’s not that Frasers don’t like moisture — they do — it’s just that they require well-drained soil. So sandy or rocky soils may work better than poorly draining clay soils. Likewise, slopes may be better than bottom land, but phytophthora has certainly affected Frasers (and other ornamentals) planted on slopes.
As of now, there is no effective chemical control. Some fungicides to have an effect on phytophthora, but because you don’t usually know it’s a problem until it’s too late it doesn’t make sense to treat soil that might not even be affected with the mold.
The disease works by destroying the vascular tissue of roots, thus wrecking the ability of a tree (or shrub) to uptake water and nutrients.
If you dig up a tree that you think has died from phytophthora, you can’t tell just from looking at the roots. The only way to know for sure is to send the specimen to a lab and have it cultured for the presence of the mold.
You might consider planting at least some specimens of an alternative like the Turkish fir. The Christmas Tree Farmers Association of New York is even funding a grant to study the Turkish fir, said Lamb. But it’ll take some years to see how Turkish firs fare on a commercial level.
Even if Turkish firs can resist root rot, anecdotal evidence says they are prone to another problem: deer love to browse them.
The good news is the industry still has plenty of trees.
“We certainly have enough Christmas trees,” Lamb said. “A lot of beautiful trees.”