Pick your seeds, prepare your soil and grow better Brassicas 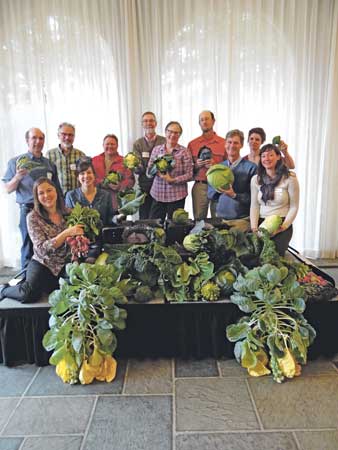 Bjorkman, well known and respected for his work with the east coast broccoli industry, has been researching and developing new varieties of broccoli adapted to the northeast climate and the entire east coast with a goal of year-round production and marketability. New cultivars have already been produced and are being trialed.

“Uneven broccoli heads are a common cause of unmarketable quality in the warmer part of the growing season,” Bjorkman explained. “Warm nights are the main culprit — not the days. Plant development is influenced by something akin to chilling hours. If the night is too warm for those to accumulate, the flower buds will wait to develop. The threshold temperature is in the low 60s, and varies with variety. We are working on breeding new hybrids that have a higher set point or are in need of fewer hours.”

Attendees asked how to achieve tighter heads on Brassicas and Bjorkman remarked that the length of the stem and branches is a major determinant on how tight heads will be.

Too much nitrogen in the last two to three weeks of the growing season will push stem and branch growth, resulting in looser heads.

Hollow-stem syndrome was another concern of producers.

Bjorkman said hollow-stem, which also reduces marketability and frequently leads to secondary pathogens invading the plant, is another concern of overly rapid growth in the later part of development.

“Growers experiencing this malady can adjust the following factors,” said Bjorkman. “Use resistant varieties, space plants closer, use less nitrogen in the last month or time planting for a cooler season at harvest.”

Bjorkman remarked that while boron deficiency may also cause hollow-stem, it is a “relatively rare and easily avoided” issue. “Boron deficiency symptoms have dark tissue in the hollow part of the stem or the epidermis in some cases. It is avoided by applying a pound per acre of boron.”

Soil testing is recommended and some attendees remarked on their success through leaf testing to determine desired requirements of increasing or decreasing supplements.

Marchant says after several failed attempts, he quit trying. Kent says he has no geographical advantage.

Brussels sprouts are a target of pest and disease threats and cabbage aphids are one example.

Susan Scheufele, University of Massachusetts Extension, addressed cabbage aphids and other pests and diseases of Brassicas.

“People have stopped growing Brussels sprouts because of the cabbage aphids,” Scheufele said.

Scheufele remarked that finding sources of diseases and pests is essential in effective management. “What’s the lifecycle?” Scheufele asked. “Where is it coming from? When is it active? Ask yourself, how can I protect my crop?”

Swede Midge is an important insect to be on the lookout for in the northeast. Scheufele reported that this is a serious threat, especially dangerous to broccoli, cabbage, cauliflower and other crucifer crops. The larvae of Swede Midge feed on growing tips of plants, seriously affecting marketability.

Native to Europe and southwestern Asia, and a potential threat to the USA and Canada, the Swede Midge was first discovered in the United States in 2004 in New York State in Niagara County.

Scheufele emphasized stringent management, using only clean transplants from trusted sources, diligence in scouting for Swede midge (and all pest and diseases), insecticide applications (and fungicides) as needed and rotations to non-crucifer crops.

Attendees were interested in learning more about Alternaria disease, which may be transferred through contaminated seeds. While it was confirmed that Alternaria disease resistant varieties have not been developed at this time, it was reported that Brassica seeds can benefit from hot-water treatment, which will destroy common bacterial and fungal seed-borne diseases of Brassica crops.

Jean-Paul Courtens, Associate Director of Farmer Training with Hudson Valley Farm Hub, spoke to attendees about field layout strategies and learning through the trial and errors of growing Brassicas as co-owner of Roxbury Farm, a 425-acre integrated, biodynamic farm in Kinderhook, NY.

“Brassicas are a plant family that includes many different crops from radishes and arugula, to broccoli and cabbage,” Courtens remarked. “It offers us opportunity to offer a great diversity in the marketplace.”

Courtens said Brassicas are a “wonderful crop in any vegetable rotation,” and are beneficial to soil health. However, he is quick to point out, “It is important to understand the physiology of Brassicas as they have very particular needs from fertility and water management to many pathogens they have in common that we would like to avoid.”

Speaker Jan van der Heide, Bejo Seeds Northeast Market Manager, presented information on successfully grown Brussels sprouts. van der Heide said, “There is something for everyone to like in the Brassica group. We are not just talking about ‘your grandma’s cabbage’ anymore. Instead, we have a wide variety of heading cabbages and leafy Brassicas that can be eaten fresh, in salads or stir fries, or lightly cooked, and that offer a range of flavors, textures and colors.”

“All Brassicas are loaded with healthy phytonutrients (glucosinilates),” said van der Heide. “Regardless of which kind of Brassica you prefer, the health benefits are significant.”

van der Heide says most Brassicas are relatively easy to grow. “This means that Brassicas can be an important part of the vegetable diversity on farm markets, CSA shares and in supermarket produce displays — and consumers can feel good about eating locally produced food.”

van der Heide said that both growers and consumers will benefit from applying some creativity to preparation of the Brassica vegetables, but that shouldn’t be a problem.