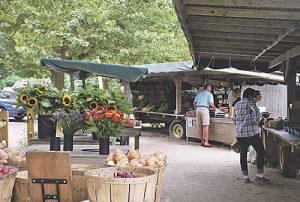 by Jane Primerano
“There ain’t no island left for Islanders like me,” Billy Joel sings in “Downeaster Alexa,” but that isn’t quite true.
While Suffolk County is no longer one potato field after another, there are plenty of governmental and non-governmental organizations working hard to permanently preserve farmland.
One of these is the Peconic Land Trust, which has preserved about 12,000 acres since it was founded in 1983. Every parcel is still a working farm, according to a press release issued by the trust. The trust often works in conjunction with government agencies, as it did with Southampton Town to preserve prime agricultural land. Southampton purchased the development rights of two parcels late last year.
The larger of the two was sold to farmer Hank Kraszewski III and a 13.9-acre tract was sold to Jim and Jennifer Pike.
The Pikes now own three parcels of land and lease more. Jim Pike is an Islander, at least in the summer sense. He fell in love with the South Fork as a boy and came back after college, where he majored in forestry.
In need of a job, he started working for the county extension service, “counting bugs,” Jennifer said, and encountered potato farmer Charlton Halsey. Jim worked on the packing line and Halsey let him borrow land to see how farming would work out.
That was 25 years ago.
Today Jennifer and Jim work the farm with about 12 employees.
They operate a large stand on Sagg Main Road on the 7.6 acres they purchased from the trust in 2011. That was the first parcel in Southampton Town that was protected by enhanced restrictions that ensure the land is perennially an actual working farm. The latest purchase, also land under enhanced restriction, brings their holdings to 27 acres.
“It is sad for us to see preserved farmland used for anything other than ‘real’ agriculture,” Jim Pike said of the enhanced restriction program in Southampton.
Under enhanced restrictions, formally known as the Affirmative and Affordable Farming Covenants and Resale Restrictions, the value of the land is lowered to “true agricultural value” for food production. In addition, 80 percent must be used for food production, not equestrian or vineyard purposes. Also prohibited is any horticultural use that results in the removal of soil from the property. Other preventative measures are included in the regulations.
The South Fork has extremely high land costs. The average value of protected farmland is more than $100,000 per acre, well out of the range of the people who really know how to protect the land. The enhanced restriction program was founded to make farming possible because agriculture is an important part of Southampton’s history and culture, according to the Trust’s press release.
Southampton Town Supervisor Jay Scheiderman was quoted in the Trust press release: “Traditional food farming is being squeezed off of prime agricultural soils in favor of higher paying uses such as horse farms and estates. The towns’ participation shifts the economic equation once again in favor of food crops, such as corn and potatoes, grown by local farmers.”