Plan ahead to develop a kid-friendly farm 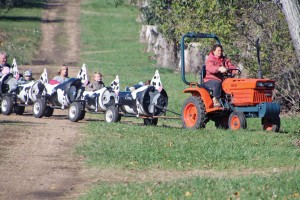 by Bill and Mary Weaver
In this age of texting, video games and TV, children still love to climb, crawl, jump, swing, and slide. The popularity of Afton Apple Orchard’s playground is proof. Located near Hastings, MN, families pay just to enter Afton’s innovative playground and PYO.
The farm was purchased by Cindy and Frank Femling in 1989. At that time, “the playground consisted of a single tire hanging from a rope,” and the Femlings knew absolutely nothing about maintaining and running an orchard. “We thought the farm would be a good place to raise our children,” said Cindy simply.
Her husband Frank has been a whirlwind of constructive activity since they purchased the farm. “He studies a lot. He figured out how to run the orchard and the farm,” Cindy explained. “He built our house and our large retail building.” Bit by bit, Frank added to the playground. “Almost all of their popular play equipment was constructed by Frank on-site.
“Everything he makes up his mind to do, he does,” Cindy continued. “He’s redone everything that was here when we bought the original 117 acre farm. Now we employ four of our adult children on the farm. They are learning the ropes with advice from their Dad, and taking over some of our duties. We’ve expanded the farm to 300 acres, and offer 14 varieties of PYO apples on 70 acres, plus PYO pumpkins and several varieties of fall raspberries.”
In June and July their PYO strawberries are equally popular. Throughout the seasons, their outstanding playground remains a big attraction.
“The first playground improvements came,” Cindy continued, “because I was spending a lot of time at the orchard, and the children came with me and needed something to do. Babies came with their parents for PYO, so I told Frank we needed baby swings. The Retread Hill grew out of an article I read in the paper about kids needing more exercise. Frank built it, and it grew taller and taller.”
Signs at the playground ask parents to supervise their kids. Sometimes the parents sit and visit, and sometimes they join in the fun. “There can, at times, be more parents than kids on the Retread Hill,” added Cindy.
Swings in the shapes of a motorcycle, a horse, a tractor and an elephant were purchased when the Femlings came across them while traveling. The “Cow Train” was also purchased, as well as the Jump Pad and the Spider Web rope net for small children to play in that was new this year. “But Frank put in the stakes and set everything up for these, and everything else was designed and built on site by Frank, including the fortress with its slides and tunnels.
“We first saw the tube swing that children can also crawl through on a farm in Texas, and Frank created one for us. We have to keep adding to the playground,” Cindy continued, “because 12,000 to 15,000 school children visit here on field trips within 6 weeks, and we need to have enough activities to keep them all busy. We expect from 2,000 to 4,000 kids on weekends. Nobody else around here has a playground like ours.”
By choice, the Femlings have de-emphasized the scary parts of Halloween. “Our ghosts and witches are smiling,” commented Cindy. However, this has also been a wise business decision. “A lot of people in our area don’t ‘do’ Halloween — various religious and ethnic groups,” Cindy continued. “So for school tours, we’re careful to give each child three apples and a pie pumpkin, so they can cook with it if their families aren’t ‘into’ Halloween pumpkins.”
A huge, 15 acre corn maze, designed by the family with details worked out by an organization that specializes in mazes, is also a big draw, at $7 to $9 per person. The first part of the maze is for the “directionally challenged.” Anyone desiring to do so can leave the maze at the end of this section. The middle part of the maze is more difficult, and the last section is extremely difficult. Several other types of mazes are included. The maze has over 6 miles of twists and turns.
Overall, this outstanding entertainment farm succeeds eminently in a stated goal for the mazes: helping families to have fun together and laugh together (while sneaking in some healthy exercise for the unsuspecting.)