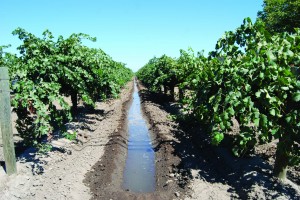 by Kelly Gates
Crisis. Catastrophe. Triage. These are just three of the words used to describe the drought situation in California by Congressman Jim Costa, USDA Agriculture Secretary Tom Vilsack and California Department of Food and Agriculture Secretary Karen Ross the day the country’s long-stalled Farm Bill passed by a vote of 68 to 32.
While it took years of haggling for members of government to finally agree on the 360-plus page Farm Bill, bipartisanship was nearly immediate when it came to addressing the pressing needs of California food producers.
“We are offering $20 million of assistance under the Farm Equipment Program to farmers who need to do things like improve irrigation, implement conservation systems to use less water and improve watering facilities for crops and livestock,” said Vilsak. “There is such extraordinary diversity of crops grown in California and in addition to the farm income this state generates, there are hundreds of thousands of jobs to consider. Faced with the dual challenge of lack of workforce due to immigration reform issues and the changing climate that has produced a longer period of drought, with precipitation in California at all time lows, we wanted to offer our support.”
Farmers whose water allocations have been reduced by at least 85 percent will be top priority, he added. He encouraged all other farmers in the Sunshine State to get in touch with conservationists to fine-tune their individual plans to implement conservation systems, improve watering facilities or whatever else might be needed to help resolve their specific issues.
Costa cited several statistics that reveal the dire need for drought assistance. According to the Congressman, California currently has 13 percent of its average snow pack, and its reservoirs, which typically stock 55-65 percent carryover, now have only 20 percent.
“We are looking for ways to maximize whatever reserves we have,” he said. “We are committed to providing the necessary leadership and to manage the events we’re dealing with before they supercede what we can do to control the problem.”
Costa expressed his appreciation for the support of various groups. Along with the USDA, California Department of Agriculture and Congressman Costa, the White House administration was also supportive of the assistance efforts.
“I am a third generation farmer. I grow almonds, so I always give the President almonds when I see him,” he said. “But when I shook hands with him after the state of the union address, I told him, ‘no water, no almonds.’ And his response was, ‘we have a drought to work on.’”
Costa stressed how important every drop of water is to farmers. In many cases, it can be the difference between keeping employees on the payroll or letting them go. Or having to sell the dairy cows and give up the family farm that has been passed down from generation to generation, he said.
The Congressman pointed to a collection of nearly 300,000 acres on the west side of Fresno County that is turning fallow due to lack of water. In the past, the acreage has been used to grow melons, tomatoes and other fruits and vegetables.
He also referred to the reported 40 percent and higher unemployment rates in communities that have long been amongst the richest agricultural regions of the country as “the human face of this drought.” But, he also spoke about the potential to rectify these problems.
“Last year, on a bipartisan basis, senators from opposing parties worked with the Bureau of Reclamation to get carryover water assistance for farmers involved in a 300,000 acre feet of water issue [out west],” he said. “Then, we have also had situations, like a recent repeal of a river agreement, that have caused problems for the water authorities.”
He encouraged interested parties to sit down and talk about the water battles that have historically taken place in California and how to avoid making any of the same mistakes. The main goal, he added, is “to ensure that cooler heads prevail this time around.”
As the initial $20 million is doled out to qualifying farmers, plans to strategically allocate existing water reserves are also being constructed. So are ideas for dealing with climate change and other factors that could pose even more challenges for farmers in the future.
“You cannot have a sustained conversation about water in the west without talking about climate change,” said Secretary Ross. “We have plans in place to improve efforts to use more recycled water and storage projects that would provide more regional resiliency. We will be addressing these issues more robustly over the next few years as well.”
Aside from financial help and preparing for ongoing climate change, the California Department of Agriculture and its supporting partners have also begun formulating a strategy for allocation existing water reserves. Water will be prioritized for drinking and fire suppression for the state’s inhabitants first.
Several organizations, including California’s Department of Fish and Wildlife, will routinely monitor and report on water levels, enabling authorities to make real time decisions regarding the allotment of the vital liquid.