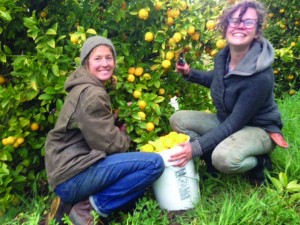 by Kelly Gates
In 2003, with decades of growing experience between them, Bob Connard and Fred Cline founded Green String Farm in Petaluma, CA to teach future farmers about sustainable farming.
According to Misja Nuyttens, farm manager at Green String Farm, the 150 acres of land at the core of the business were originally part of a soil improvement project that required extensive rehabilitation before any crops were planted.
“This land was very undesirable as it was overgrazed and overused in the past,” Nuyttens told Country Folks Grower. “Bob has been farming sustainably for the past 30 years and immediately knew that several years of cover crops and additional soil improvement would make the soil useable again, so he took on the project. After three years of work, the land was ready for planting and students were brought in to learn all about sustainable farming.”
Educating young growers was always the main purpose of the new property. As head grower, Bob’s main focus was on passing along his knowledge of cultivating, marketing and interacting with the public and the environment in the most earth-friendly, sustainable way possible.
Even the company name, Green String Farm, relays the owner’s farming philosophy. It represents the connection — the thread or ‘string’ — between the earth, the produce that grows there and the people who cultivate and consume the food.
It is this philosophy and the practices that support it that Green String Farm’s owners have endeavored to teach 12 new interns every three months.
“We have 12 interns who live and work on the farm at any given time,” said Nuyttens. “They work in the fields and greenhouses in the mornings and then take classes from Bob in the evenings. He teaches everything from soil improvement techniques to how to incorporate livestock into a sustainable farm program.”
There are three greenhouses for the interns to work in, filling flats with the farm’s own compost and seed mixture and planting more than half of the crops before transplanting them into the fields, orchards or vineyards.
The farm produces a diverse offering of produce that ranges from winter crops like kale, squash, onions, garlic, chard, broccoli, cabbage and chicory to culinary herbs, citrus fruits, plums, pears, apples, eggplants, melons, cucumbers and over 20 acres of heirloom and other types of tomatoes. There are also grapes grown for an off-site vineyard farmed by Fred Cline and his family.
There are around 150 acres of land there. Each plot is planted, cultivated and harvested and then a cover crop is used to replenish the soil. According to Nuyttens, each crop is tended to using a blend of intern labor and nature’s own helpers.
“We use a tractor for tillage, but nearly everything we grow is planted and harvested by hand by our interns,” she explained. “We don’t have a normal pest management program that involves chemicals. We consider the presence of pests as indicators that something is imbalanced that is making plants weak and we address the source of the problem instead of the symptoms.”
Because Bob and Fred like to keep things as natural as possible, Green String Farm has a ‘weedy’ appearance. This is due to the nurse and cover crops growing between the rows, supporting the main crops.
Some are planted because they develop deep root systems, which bring water and nutrients to the surface, closer to the roots of the fruit and vegetable plants which are the farm’s main focus.
Interns are educated on such organic practices even though the farm is not certified organic. Certification or not, Green String Farm actually meets — and exceeds — every criteria for USDA and California standards, said Nuyttens.
“We feel that organic certification could be even more thorough so we make the effort to take organic, sustainable farming to another level here,” she said. “We don’t see any pesticides, even those approved by major organizations, as beneficial to the soil or to the food system and the people consuming the foods. So we don’t use them at all.”
Sheep and goats keep the vineyards impeccably mowed. Interns occasionally work with the sheepherder to learn how to tend to the animals. They also help with the farm petting zoo, which keeps kids entertained while the parents shop for fresh produce.
The interns even have full access to the food produced at the farm and at some of Bob’s other locations for their meals. This includes fruits and vegetables, eggs, beef, grains and olive oil made with the farm’s own press.
This all-encompassing educational program has benefited numerous future farmers over the years and the farm owners hope to reach even more people in the future. They are currently working to gain accreditation so each intern can apply the three-month learning program to his or her college degree.
Until then, interns still walk away with a hands-on learning experience unlike any other. And a bolstered understanding of the importance of sustainable farming.