Planting the seeds for fall fun 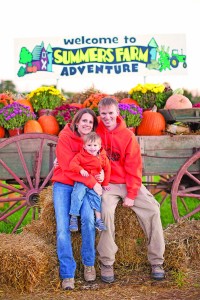 by Sally Colby
Teresa Summers grew up on her family’s dairy farm, studied dairy science at Virginia Tech and had plans to return to the family farm. But the dairy herd was sold, and instead of returning to the farm, Teresa ended up working in the food industry. She recalls that in 1993, she read about a Florida farm that was doing ‘entertainment farming.’
“I could to that,” she said. “I could go back to the family farm.”
Not long after she learned about entertainment farming, now referred to as agritourism, Teresa had an opportunity to attend the Mid-Atlantic Direct Marketing Conference. She was there to sell pies for her company, but found there was a lot more to the conference. “I went to some of the meetings,” she said, “and found out there are more people looking for different ways to sell farm products and preserve our way of life.”
After a lot of research and planning, Teresa opened Summers Farm Adventure on her family’s Frederick County, Maryland farm in 1997, but says that she really didn’t have any idea what she was doing. “We started out small — I knew nothing,” she said. “Our signs were orange plates with black arrows.”
As Teresa learned more about agritourism, the business evolved and grew. She married Jeff Greenwood, who had been a farm employee at Summers Farm. When Teresa’s father passed away, the family had to make a decision about what direction the business would take. They decided to give up farming 400 acres they had been farming and concentrate on developing the Summers’ 100 acre farm to create Summers Farm Adventure.
Jeff and Teresa agree that there was a significant learning curve as the business evolved from a dairy and crop farm to agritourism. They spent a lot of time focusing on creating a business that would be a family fun experience. “There are fewer people tied to rural America,” said Teresa. “Before, a grandmother or an aunt or uncle would have a farm. Today, that isn’t the case.” Teresa also noted that people spend money differently today, and are willing to bring their entire family to a place such as Summers Farm Adventure for a day of relaxation and entertainment. To broaden the farm experience, Teresa incorporates learning with the farm activities.
This fall, Summers Farm Adventure will turn orange with about 30 varieties of pumpkins planted on 15 acres. Jeff uses a two-row planter and separates the seeds by variety so that he can compare varieties and plan for the following season. Pumpkins are weighed and checked out at the end of the hay ride, and sold by the pound.
The 12-acre corn maze is another popular draw for the farm. Each season, Jeff plans the design on graph paper, then plots it out in the corn field. Summers Farm’s first mazes were created by mowing paths, but now Jeff uses spray to cut the design about three weeks after planting. Jeff tries to select a design that customers will relate to, and this year’s maze will incorporate the Baltimore Ravens logo. Jeff says that although they don’t usually have problems in the maze. Corn cops situated throughout the maze help maintain order.
“When people come here, they’re going to get a great fall fun experience,” said Jeff. In addition to pumpkin picking, the most popular activities include hayrides, the jumping pillow, a slide, the corn box and pig races. Other activities include rubber ducky races, straw mountain, rope maze, goat mountain and putt-putt golf. Special weekend activities include the apple cannon, pumpkin train and pig races. Many groups, including schools, churches, scouts and sports teams enjoy time at Summers Farm. General admission covers nearly every activity on the farm.
Teresa says that one key effort has been making it easy for customers to purchase food. “We have it all over the place,” she said. “Kettle corn, funnel cake, fresh cut fries, burgers, pork BBQ, chicken and hot dogs are all available for purchase, as well as homemade apple cider donuts, which turned out to be a signature item for Summers Farm.”
The farm is open at night on weekends, and the most popular nighttime activity is campfires. “People reserve ahead,” said Jeff. “They can bring food — it’s the only time people can bring their own food in. We light and maintain the fire.” Because they sell out all 20 campfire spots on weekends, they’re planning to construct additional sites. The sites are concentrated on a three-acre section of the farm, spread far enough apart that each group has privacy. Teresa says the campfires are a good activity for older kids’ birthday parties. “We’ve been doing this for 17 years, and some of the kids who came here when they were little still want to come to the farm,” she said. “They’re too old — it isn’t cool to come to Summers Farm, but it’s cool to come for a campfire birthday party. We’re working to get the next generation coming here.”
Jeff and Teresa rely on their professionally designed website to advertise the farm, and on Facebook for minute-to-minute information, such as whether or not there will be fireworks that evening. Jeff says that website traffic increases in late August, but really picks up in September. Guests are encouraged to review the farm’s policies and safety rules listed on the website. Rules include tips on food and beverages, attire, accessibility and restrooms.
Teresa says that it takes the entire year to prepare the farm for the six to eight week season. The farm employs two part-time workers year round, and as many as 64 extra employees are on board for the fall season.
“The best part of the business is that everyone leaves happy,” said Teresa. “They’re smiling, and it’s a place where we see whole families meeting here and spending the day. We’re living in a busy world now — life has changed and people aren’t close to their neighbors.”
Visit Summers Farm Adventure on line at summersfarm.com.