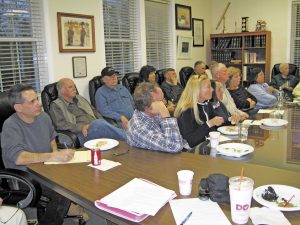 by Kristen M. Castrataro
The Rhode Island Fruit Growers’ Association held its annual dinner and business meeting March 23, 2016 at the RI Farm Bureau offices in West Greenwich, RI. Dr. Angela Myracle from the University of Maine’s School of Food and Agriculture presented research she has done on the health benefits of various plum varieties.
Dr. Myracle identifies herself as a nutritional biochemist, but she holds six degrees and has held a variety of jobs. The information she shared with the fruit growers is part of a research grant funded by the Maine Department of Agriculture.
Plums were domesticated in China 2,000 years ago. There are two general types of plums. “Old World” plums are European and blood plums. “New World” plums include beach plums. Dr. Myracle’s work focuses on Old World plums.
Plums, while not a superfood, boast numerous health benefits. Each plum has only about 30 calories, making it a good snack food. Plums are also high in fiber and low on the glycemic index, which is a measure of how the food releases sugars in the body. High fiber, low glycemic foods break down more slowly in the body, keeping blood sugar levels steadier and reducing the body’s urge to store fat.
Plums are rich in antioxidants, flavonoids and phenolic acids. They also have been associated with reduced risk of cancer, macular degeneration, digestive disorders and cardiovascular issues.
All plums are not created equal, however. The affects of plums’ bioactive compounds are influenced by weather, water and a variety of other growing conditions. Some health benefits also dissipate over time, such as those associated with vitamin C. From a health standpoint, fresh, local plums may have a distinct advantage over those shipped in from around the country or around the world.
In 2006, the United States was the second largest producer of plums. By 2013, the U.S. had fallen to 10th place. Since 96 percent of United States plum production occurs in California, the falloff could be the result of the extended drought conditions in that part of the country.
This downward production trend combined with the health benefits of local plums could mean that there is room for local producers to meet some of that demand. This is especially true of states like Maine that have plenty of access to water. Maine also has a tourism industry of around 14 million a day visits during peak plum season. The confluence of supply and demand could result in a robust plum market.
One drawback to this is the relative unfamiliarity of Americans with plums. In Eastern Europe, plums are used in spirits, cordials and wines. Popular plum desserts include plum cakes, plum tarts and fruit compote. Dried plums are used in sweet and savory dishes. In America however, besides being eaten fresh, plums are most commonly used either in jellies or preserves or eaten as prunes.
Another part of Dr. Myracle’s research seeks to redress this unfamiliarity. Her graduate student Zakkary Castonguay is working with her on a project entitled “Consumer Acceptability of Locally Grown ME Produce.” The goal is to identify what varieties of plums that have been shown to grow well in Maine also appeal to consumers . . . and therefore could be an addition to fruit growers’ orchards.
To gauge customers’ varietal preferences, Dr. Myracle and Mr. Castonguay have run a series of sensory tests. These tests are conducted in controlled environments designed to heighten taste perception, which involves both scent and flavor. Plums are expected to have a pleasant combination of tart skin and sweet flesh. Participants are also asked to evaluate the fruit on attractiveness and texture.
Results to the first sensory tests are not as complete as the researchers had hoped due to weather-related crop loss on several varieties. However, six varieties could be tested. Four varieties rated in an acceptable range for all tested attributes. Interestingly enough, the two varieties that rated lowest in attractiveness as well as taste and texture are the two commercial varieties most available to growers and most often sold in grocery stores, Methley and Shiro.
As noted earlier, growing conditions — including location — have an important influence on plum characteristics. Could it be that these varieties do not perform their best in Maine? Possibly.
What is clearer is that plum production could develop into a strong niche market for growers who select the right varieties and educate their consumers on additional ways to utilize plums.
Dr. Myracle’s students have successfully created plum sauces, plum crisp, plum jam cookies, and the old-fashioned Christmas plum pudding. They have added plums (and prunes) to salads, muffins and ice creams. With such a tantalizing array, we all might find ourselves going just a little plum crazy.