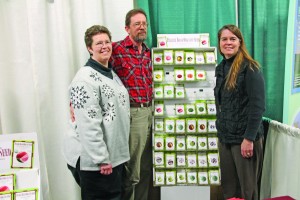 by Bill and Mary Weaver
Two North Dakota brothers, their wives, and children, who farm together at Prairie Road Organic Farm and Seed in Fullerton, ND, were chosen as 2014 Organic Farmers of the Year. The award was presented to David and Ginger Podoll and Dan and Theresa Podoll at the Midwest Organic Farming (MOSES) Conference earlier this year.
Three years ago, the operation began their own organically grown seed company, specializing in vine crops and vegetables, many of them bred on their farm to be both early maturing to fit the Upper Midwestern climate, disease-tolerant, and well-suited for organic growing.
This new business aspect of their small grain operation actually began many years ago when they lost their turkey operation due to the closing of the processing plant. Seed saving was a family hobby in their large, permanently mulched garden that a neighbor described as looking as though it came from a photo in a seed catalog. “Our garden is our teacher,” commented Theresa.
For their garden, the brothers and their parents had long saved seeds, making a family project out of choosing the seed parents for the next year from among the very best of the previous year’s crop. As David told the award committee, his best advice for new and transitioning organic farmers would be “to develop your powers of observation, and think carefully about what you see.”
For the seed they now offer under the variety name, Uncle David’s Dakota Dessert squash, David said, “I planted a bunch of Maximas all together, and watched to see what Mother Nature would do.” David selected the best of progeny that resulted and year by year weeded out any undesirable traits. “Mother Nature works slow and sure with more biodiversity,” he added.
When Theresa and Dan were dating, she was surprised to be handed a check list to evaluate the squash they had eaten for dinner, as the family worked to determine which individual squash fruits would have their seed saved for the next generation. “Every squash we selected for seed had to pass a taste test. That’s the way farmers and gardeners for 10,000 years have saved seed.”
The Podolls and Mother Nature, over many years, developed a real “workhorse variety,” with Uncle David’s Dakota Dessert Squash. It has excellent taste, early maturity, and dependability. “We have never had a crop failure in 40 years. Even when the plants were hailed out, they came back and produced good fruit,” David exclaimed.
The Sweet Dakota Rose Watermelon, also bred and selected by the Podolls, began as a cross between Early Canada, a small, early maturing variety from Gurney’s, and Black Diamond, a large southern shipping variety. The family made selections for decades, to produce the watermelon they now offer, that has few, small seeds, and is early maturing and very sweet.
“One year, we lost all the plants to disease except for one plant,” David continued. Some gardeners might have been discouraged by the loss, but these keen observers recognized the potential in that one remaining disease-free plant, and kept saving seed and making selections from it.
“In 35 years, we have never had disease in those watermelons,” David remarked.
Prairie Road Organic Seed also offers an early maturing popcorn the family developed, Dakota Black Pop, and a unique sweet corn named Martian Jewels, originally developed by Alan Kapular in California. “The whole plant has purple tinting, including the cobs. The kernels are white, but when the kids eat the corn on the cob, their mouths turn purple,” smiled Theresa.
The Podolls have been contract seed growers since 1997, producing for organic seed companies, such as Fedco, Seeds of Change, High Mowing Organic Seeds, and Botanical Interests. They are also members of the Family Farmers Seed Cooperative, working with seed growers from across the western half of the country.
When asked why they decided to raise seeds, Theresa replied, “What could I do with my hands that would be more fulfilling? Saving seeds and trying to improve them adds to the circle of life on our farm. We can’t have food security without seed security. My parents were young children in Nazi occupied Holland. One of the first things the Nazis did was take control of agriculture and food.”
David added, “Agriculture and seeds provide the foundation on which our lives depend. No one should own, control, or patent seeds.”
The soil in their intensive, hand-worked garden has been so heavily amended with mulch, green manures, cover crops, and other organic amendments, and so carefully cared for, that today, it is a full three feet deep of black soil teeming with earthworms, with organic matter basically equal to the native prairie soils that existed before early pioneers first broke the sod.
In introducing these outstanding stewards of the land, Melinda Hemmelgarn, of the MOSES Board, quoted Jonas Salk as saying, “Our greatest responsibility is to be good ancestors.” The Podolls fit that description well. As “good ancestors,” they are working to pass on to the next generation their organically farmed land in better condition, and the varieties of food they grow more disease-tolerant and better suited to their climate than they found them.