Pollinator protection with neonicotinoid and other pesticide use 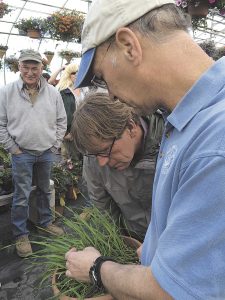 by Sanne Kure-Jensen
Dr. Richard Cowles of the CT Agriculture Experiment Station (CAES) Valley Laboratory described ways to protect honeybees and pollinators while protecting plants from common pests using systemic pesticides and insecticides including neonicotinoids at a Rhode Island Nursery & Landscape Association (RINLA) Twilight Meeting. Nearly 80 people attended the gathering at Clark Farms and Morningstar Nurseries in Wakefield, RI.
Application method and time before bloom affect concentrations in plants and risks to pollinators. Long lasting systemic pesticides have been especially important for growers raising hanging baskets, which are difficult to spray overhead. Customers demand dense plants, which growers find hard to cover with sprays even when growing on benches, making effective pest and insect treatments nearly impossible. Systemics move upward in sap from the soil throughout treated plants protecting hard to reach interior growth. Using systemics treatments means growers do not have to spray directly over their heads and spill on themselves. Dr. Cowles said, “A number of pests would be awful to manage without systemic pesticides.”
“It takes a perfect storm of plants and pesticides/insecticides to create a problem for pollinators,” said Dr. Cowles. Honey bees and native pollinators face the greatest risk from plants treated with systemic pesticides when:

Dr. Cowles explained, “Most flowers that look pretty to us are attractive to pollinators, too, but not all of those plants provide significant quantities of pollen or nectar to pollinators.” Using high doses of systemics on plants that are highly attractive to pollinators and produce large quantities of nectar or pollen, such as the mint and daisy family can be “very risky for pollinators,” he continued.
Honeybees are at risk from systemic concentrations as low as 25 parts per billion (ppb) in nectar and 100 ppb in pollen.
To protect pollinators and stay below these concentration thresholds, Dr. Cowles conducted experiments using sunflowers as a model system in which sufficient quantities of pollen could be recovered to quantify the insecticide concentrations. Based on this experiment, he recommended scheduling a soil drench of dinotefuran (at low or medium concentrations) no later than four weeks before bloom. Low concentrations of thiamethoxam should be applied no later than two weeks before bloom and medium concentrations no later than three weeks before bloom. Dr. Cowles recommended never using a high concentration of dinotefuran, imidacloprid or thiamethoxam as a soil drench to plants that produce large quantities of pollen or nectar. In contrast to drenches, Dr. Cowles’ research found that foliar sprays of these insecticides broke down rapidly in the treated sunflowers. Dinotefuran (at low or medium concentration) could safely be sprayed up to one week before bloom. He said imidacloprid may safely be sprayed up to one week before bloom at labeled rates. Medium or high concentrations of thiamethoxam may be sprayed safely up to two weeks before bloom.
Ornamental plant growers may use pre-planting neonic soil incorporation or drench with cuttings or seedlings. Additional treatments are sometimes unnecessary when potting up these plants. By the time they are large enough to bloom, these plants may have very low neonic concentrations.
The neonicotinoid acetamiprid (TriStar) when used alone is 1,000 – 2,000 times less toxic to pollinators than the other neonics mentioned above. TriStar works on contact, systemically and via translaminar (redistributed from a sprayed leaf surface to the unsprayed surface). It controls a wide variety of insects including whiteflies, aphids, thrips, leaf-eating beetles, leaf miners, scales, mealy bugs and caterpillars. The reason for the lower toxicity of this insecticide to honey bees is that it is rapidly metabolized by enzymes in the bees. Certain fungicides block the action of these enzymes, and so if combined with acetamiprid can be as toxic to bees as dinotefuran, imidacloprid or thiamethoxam. Therefore, growers should be careful not to combine acetamiprid with these fungicide products when treating bee-attractive plants.
Some treatments approved for use in certified organic operations can pose risks to bees. Fruit crops need to be protected during bloom with fungicides, which can lead to a high level of exposure to bees. Fungicides may affect proper fermentation of native bees’ or honeybees’ beebread (pollen, honey and bee secretions) used to feed larvae.
Dr. Cowles reminded applicators not to spray blooming plants while pollinators might be foraging such as during a warm, sunny day. Pollinators are at greatest risk of collecting toxic concentrations of pesticides in pollen and nectar while sprays are still wet. Early mornings or late afternoons on low wind, dry days help sprays dry before many pollinators start foraging. Bumblebees are an exception as they often start their day before sunrise and work long hours.
The pyrethroid insecticide bifenthrin is used in a pre-plant potting mix incorporated treatment. This product formulates the insecticide on the surface of fine silica sand. “When mixed into the potting medium, it’s like a land mine in the potting media… and contact with soil-dwelling insect larvae, such as black vine weevil or white grubs means death,” said Dr. Cowles. This nursery treatment can linger for three to four years in pots or after transplanting into a landscape. Even though these are extremely long residual effects, the environmental impact is minimal, because this non-systemic insecticide stays in the soil where it was originally placed. Other attempts to formulate bifenthrin on larger fertilizer prills have not been successful, possibly because the granules containing the insecticide are too widely spaced throughout growing media.
Intelligent use of pesticides can reduce risks to pollinators. Plant health care professionals should identify any plant pests, research vulnerable stages in their life cycle as well as appropriate treatment products and delivery methods. Applicators should use just enough of the right treatment at the right time. This approach will save money as well as reduce risk to the applicator, customer, pollinators and other wildlife. Dr. Cowles gave an example of spraying Andromeda bark with a neonic insecticide after the blooms finished to offer a whole season of lacewing control with little residue in next year’s flowers.
Dr. Cowles advised arborists treating trees to make soil injections near the base of trees where the densest root mass is located, not all the way out at trees’ drip lines. He reminded landscapers not to use any systemic treatments on or near linden trees since their flowers are pollinator favorites, and these trees seem to transport systemic insecticides readily to their nectar. Neonic products are now banned from use on lindens, but other systemic products could pose a risk to pollinators if used on lindens.
Dr. Cowles urged growers, “Please do not apply neonics to plants that are going to be marketed for their pollinator value unless you apply the products in a manner known to leave residues of little concern.”
Send questions on pest management with pollinator safety via email to Dr. Richard Cowles at richard.cowles@CT.gov .