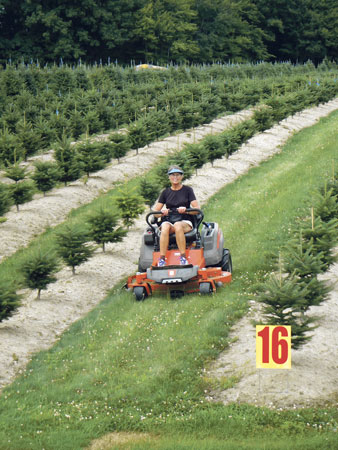 Manners continued working as an engineer as he expanded his tree operation, adding about 7,000 trees every year. Since the farm wasn’t in a populated area, he knew he’d have to entice customers with special features. Customers came from miles away for horse-drawn wagon rides to the fields, the freedom to cut their own tree and family time in a Christmas-themed barn.

When Manners was ready to slow down, his daughter Ruth continued operating the farm, but didn’t plant new trees in anticipation of going out of business. Ruth’s marriage to Kevin Lemons, a retired Marine who worked in construction, meant potential for the farm to continue, but Kevin had no experience in the business.

“When I met Ruth, she had been running the farm by herself for several years and was ready to get out of the business,” said Kevin. “The first thing that struck me when I was in the field watching people was that just about everyone represented three generations – grandparents, their children and grandchildren. They were having a blast in inclement weather, but it was an annual tradition for them.”

Kevin realized he was seeing a unique togetherness among families visiting the farm. “When I saw that, I wanted to be part of it and told Ruth I wanted to learn about growing Christmas trees,” he said. “She gave me an old black and white book published in the early 1960s and told me to read it.”

Starting from scratch in an established business is tough, but Kevin saw the potential. “Ruth hadn’t planted any new trees for about five years,” he said. “With something that takes 7 to 11 years to reach marketable size, it doesn’t take a rocket scientist to figure out we were going to run out of trees.”

In the spring of 2006, Kevin and Ruth started to rebuild the business by planting 3,000 new trees. Manners had already been bringing in fresh pre-cut trees, so customers who couldn’t find a tree in the field had that option.

The family closed the U-cut segment of the business when there were no more trees to cut. Young trees were coming along well, but Kevin quickly realized that it was important to customers to cut their own trees, and found it disheartening to watch people leave the farm without a tree they had chosen and cut themselves. But with new trees going in the ground every year, customers on the wagon ride to the field could see the young trees growing and knew they’d eventually be able to visit and cut their own.

Ruth planted species she and her father had been successful with, including white pine, Scotch pine, blue spruce and Norway spruce. “There’s a big market for firs,” said Kevin. “She tried growing Fraser firs but they didn’t do well because of the high clay content of the soil. I saw a lot of potential with Canaan fir, experimented with some in 2009 and planted 3,000 Canaan fir in 2010. But I wanted customers to see what we were doing, so I bought 120 Canaan fir from another farm and set them up with posts. Before getting off the wagon, people could see them displayed upright.” Kevin explained to customers that that Canaan fir would be an additional fresh-cut option in a few years.

While fully aware that he was still an amateur in the business, Kevin continually thought about how to improve the farm. “By 2009, I changed the planting method,” he said, adding that it was an improvement but not quite what he was looking for. “In 2011, I stumbled onto something by mistake, and in 2012, I finally got what I wanted with mounding.”

Although Kevin hadn’t been a farmer for very long, he relied on his experience in the construction industry to achieve what he wanted for planting new trees. “I realized that by positioning the two-row disk a certain way, it throws the soil inboard. I measured where I was going to plant, then disked it. Then I fabricated another piece of equipment, a shaper, to form the mound.”

Kevin clears each field completely rather than interplanting. After a field is fully harvested, stumps are removed. “It’s hard to cut stumps flush with the ground,” he said. “It doesn’t matter how close to the ground you cut – if there’s a half-inch stump sticking up from the ground, it dries out and doesn’t rot as fast.” Kevin found that a hydraulic stump grinder makes short work of the process, and debris rots faster. After stump removal, he establishes a cover crop, usually a grass, prior to replanting.

To ensure optimum nutrients for young trees, Kevin takes soil samples and makes appropriate amendments. He uses composted manure from local horse farms to add organic matter to the soil. “I use a modified three-point hitch rototiller to blend everything while maintaining the mound, add fertilizer and run the shaper over it again,” he said. “Then I plant four foot wide swaths of grass between the mounds and plant trees the following spring.”

The space under trees is kept clean and weed-free. “When I make the mound, I spray it with a pre-emergent herbicide the previous fall,” said Kevin. “That works until spring, then after planting, I repeat the application. By the first week of June, I’ll mulch the mound with straw. I learned that firs like a little cooler soil temperature, so the straw helps with that too.”

In 2012, Kevin planted 3,500 1+1 Canaan firs. He was concerned about the size of the trees, but the tree nursery assured him that the genetics were good and the trees would perform well. “In three years, I sold trees from that field,” he said. “In year four, I had some eight-footers.” Kevin and Ruth now plant between 2,500 and 4,000 new trees every spring.

Although Canaan firs dominate Manners Christmas Tree Farm, many customers like blue spruce and white pine, so Kevin continues to plant those. “I’m a fan of Concolor fir and Douglas fir,” said Kevin. “They’re nice trees. We also have Norway spruce buyers so I plant those every few years.” Kevin has found that customers who purchase white pines have usually been white pine buyers for a long time and know how to decorate them. “I try to explain why our white pines are different,” he said. “It’s a fast growing tree, and there’s a short window to shear it for good bud development the following year. We hold them back a little each year so the branches get thicker and heavier.”

Manners Christmas Tree Farm opens the day after Thanksgiving with horse-drawn wagon rides to the field. Three balers and two shakers are situated in the field so trees can be processed prior to being loaded on the wagon. All trees are priced the same, which Kevin said makes it easy for everyone during the season. “We’re in the middle of nowhere,” he said. “Most of our customers come from at least an hour away. By having a good price, a quality product and a unique experience, we get people here.”

Although it’s time-consuming, Kevin responds to all comments and reviews on social media and encourages customers to call with questions. “To me, customer service is key,” he said. “It’s so heartwarming to hear people thank us for keeping the farm going, and we’re getting new customers all the time.”