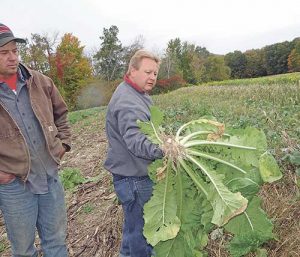 by Elizabeth A. Tomlin
Stanton’s Feura Farm, Feura Bush, NY, hosted CCE Eastern NY Commercial Horticulture Program’s Cover Crops Demonstration: Not What Grandpa Used to Grow! on Oct. 13.
Featured speakers included Northeast Soil Health Specialist Dr. Paul Salon and Research Agronomist/ Cover Crop Specialist Dave Wilson.
Cornell Cooperative Extension Area Specialist Chuck Bornt, who led the program and was a major force in the cover crop trial plots, noted that cover crops should no longer be considered as an afterthought, but should be thought of, planned and planted as with traditional crops.
“Don’t just think of them as, ‘do I have time to get them in?’” said Bornt. “They should become part of the integral mix of your whole system.”
Wilson, discussed an overview of cover crops, benefits and reasons for species selection in a presentation prior to touring the testing plots, where over 20 different species and combinations of cover crops had been planted and tested.
Tim Stanton, owner of the farm, spoke about planting techniques — focusing on rotations — and results.
“One part of our operation that is a little different from other vegetable farmers is we grow about 500 acres of hay and this farm has got a lot of alfalfa mix in it. It’s become a big part of our rotation.”
Stanton continued, “Our general rotation is about 4 or 5 years of alfalfa hay then we do a year of pumpkins and the year following that would be sweet corn, and then we’ll be back to hay after that for another 4 years.”
Stanton said he has been using zone tillage on his farm for about 10 years, a management strategy incorporating soil health management to sustain the environment, while promoting increased production. As a result, Stanton says he has seen a decrease in a need for irrigation, “because we’re not disturbing the soil as much.”
Soils on the farm are dry soils with gravel and loam over limestone. “It’s a high lime soil, so we don’t have to do a lot of liming. Our pH is about 6 on most of the soil, naturally.”
Stanton said he grows about 42 species of pumpkins and gourds.
Organic matter levels have tested at 4-4.5 percent organic matter in soil testing, which Stanton credits to the alfalfa.
Traditionally oats have been used as a cover crop on the gravelly soil. “That’s what got us going with this,” commented Stanton. “We really needed to try to get some other species in and when we tried to get some information on it, we found out there wasn’t a whole lot of information, so we decided to make our own.”
Testing plots have been used in three separate plantings over the year with documentation of planting dates, seeding rates, rain and other factors included.
Dr. Paul Salon led a discussion of the performance of specific cover crops in the field. Mixing cover crops with precision was one of the topics he discussed.
“You don’t usually want to mix warm season and cool season,” said Salon.
Species looked at included Hairy Vetch, Dwarf Sudan Grass, T-Raptor, Daikon Radish, Crimson Clover, Austrian Winter Peas, Dwarf Essex Rape, Braco White Mustard, Winter Rye, Black Oats, Triticale, Winter Barley, Winter Canola, Barkant Turnip, and others. Mixes included Summer Solar Mix, Broadcaster Mix and 3 Way Clover Mix.
“Some of these are really good at suppressing weeds and some of these are not so good,” noted Bornt. “With some of these perennials that are slower growing, you’re going to see more weeds, where some of the annuals really took off. I think for me, I’ve never been a big Daikon Radish fan, but man, it made me a believer this year!” Bornt said he was also impressed with Dwarf Essex Rape, Summer Solar Mix, T-Raptor and the Braco White Mustard.
“When you’re doing mixes,” Salon said, “it’s between weed control and allowing the other species in the mix to be able to grow together.”
Salon said folks should be careful when planting cereal rye, as some varieties may grow to 6 feet tall, and is the first grain to bolt in the spring. “Wheat is much later and bred to be dwarf, so if your looking for mixes, I like to look at wheat and triticale because when they mature they’re lower and able to grow with the legumes.”
Salon noted legumes are more expensive than grasses.
Salon pointed out the importance of realizing the amount of seed required per square foot, and the best planting window, to get the best compatibility for species and the best production rate.
Signs marking test plots gave information on how much seed is required per acre, planting dates and the approximate cost of seed per acre.
“When you have a mix, you’ve got to be cognitive of what’s going to mature and when. If you have too much of a cereal grain in with your legumes, they’ll grow and get very carbonaceous, and will increase the carbon and nitrogen level for the next crop. You need to manage your nitrogen.”
Salon, who has been working with cover crops for 30 years, followed up the plot tour with a power point presentation of documented charts and maps showing updated plant hardiness zones and other criteria. He instructed attendees on how temperature, growing degree days, and planting dates all affect seeding rates and noted that cover crops should match the desired carbon and nitrogen ratio.
“With high residue and mature cereal cover crops you must manage your nitrogen for your next crop at planting and side dressing, especially when new to the system,” Salon emphasized.
For more information of cover crops contact Cornell Cooperative Extension Area Specialist Chuck Bornt at 518-272-4210 x125.