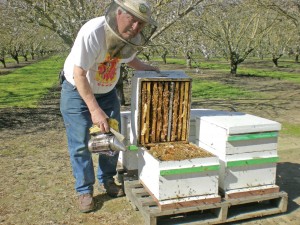 by Bill and Mary Weaver
Neonicotinoid insecticides have been getting some highly visible bad press because of misapplication, as happened in Oregon in June of 2013 when they were sprayed on linden trees in full bloom, resulting in a large, well-publicized bumblebee kill. The public was sufficiently concerned that in February of 2014 in Minnesota, protestors in bee costumes demonstrated at a Home Depot, asking the chain to stop selling bedding and nursery plants that had been sprayed with neonics. Retailers began asking greenhouse growers to either not use neonics, or to place labels on their bedding and nursery plants stating that neonics had been used in producing them, leading to the fear among growers that consumers would not purchase those plants because of negative perceptions.
Although the EPA has been taking a conservative approach, activists filed lawsuits against the EPA for not banning neonics outright. “Growers need to make pollinator stewardship a priority, because they risk both lower crop yields, and the loss of important crop protection products down the line,” stated Julianna Wilson, Tree Fruit IPM Outreach Specialist in the Department of Entomology at Michigan State University. “We need an integrated approach to pest management that results in both the control of the target pests and diseases, while doing the least possible harm to bees and beneficials.”
Researchers have been finding that in addition to neonics, tank mixes with certain fungicides can be highly toxic to bees, and that varroacides used in hives can act synergistically with neonics to make them more damaging to bees. The use of Insect Growth Regulators has also been implicated in damage to bee populations following pollination in almonds. Neonics may also act synergistically with certain inert ingredients in insecticides. Neonics are, of course, highly toxic when sprayed directly on foraging bees. Residues (usually extremely small) of neonics used systemically have been detected in nectar and pollen.
Neonics used in seed treatments can persist in soil and surface water, and the planter dust may blow onto nearby flowering plants worked by bees, potentially poisoning brood. Residues taken up by woody plants can remain there for quite a while. If neonics are injected into the trunks of woody plants, they can still be found in those plants the following year. With all that said, however, Wilson stated, “In most instances, their use as labeled poses very little risk to bees, although growers may still be affected because of people who have an emotional stake in this.”
In April of 2014, Wilson convened a group in E. Lansing, MI to work out Best Management Practices for protecting bees in orchards. The group included EPA, orchard managers, various specialists, state apiarists, and university representatives. Here is a summary of the Best Management Practices the group decided upon, which are applicable across the country, with a few added comments by a beekeeper.
Before the hives are delivered:

When the hives are delivered:

After bloom, make sure hives are removed as agreed upon. Continue to keep flowering plants in the orchard selectively herbicided or mowed. Plant bee-attractive flowering plants or a field of flowering buckwheat, if possible, so these flowers will be available for post-bloom foraging to divert wild bees from future orchard sprays. Such plantings will also help to sustain both bumblebees and wild solitary bees, some of which may have multiple generations and may help to improve on the pollinating efficiency of honeybees by giving better cross-pollination between rows. Cost sharing for such plantings may be available from several sources. Check with your Extension Agent.