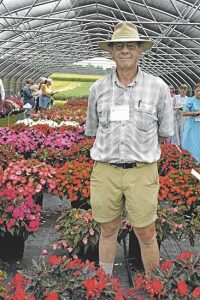 by Steve Wagner
Walking amid a cluster of greenhouse owners and managers, garden shop proprietors and other horticulture types, PSU’s Trial Garden Director Sinclair Adam paused in his serpentine tour to try to clarify a point about USDA registered plants. “What happened was there was a fellow in Finland who is a botanist,” Adam explains, “and…he saw an African Sunset Petunia. He clipped off a piece of it…did some analysis, and sure enough this petunia…was a genetically modified organism…which requires a registration in the EU. So the Finnish government ordered that all those plants be destroyed at once. This researcher informed the Germans as well as the USDA in America, and they…[said] Every genetically engineered or modified organism has to be registered with the USDA before it’s distributed or marketed.” As a consequence of this specific action, all companies will make sure that either it is registered with USDA or they will use traditional breeding methods to develop these lines in the future.
At Penn State’s annual trial gardens in Lancaster County, PA Adam pointed out that wherever a blue flag appears on a plant, indicating the first rating, that plant received a pretty high score, possibly a 5.0 or a 4.8. Plants are rated on uniformity, overall growth, foliar quality and flowering. Color is not rated. “Where three species are the same in a container, they tend to play very nicely over the course of the season,” Adam notes. “Plants that are combined with several species…one, two or three different ones…sometimes one of those plants overwhelms the other by the time September arrives.” As visitors wound their way through the scrupulously well-ordered plots, Adam offered points about plants he thought would interest them and their customers.
There has been a modicum of criticism for maintenance at the trials, but Adam said, “I would say that we are trying to grow these as Harry and Sue Homeowner would.” Adam tells the loosely-knit group that deadheading is done once, two weeks before the event — the geraniums, dahlias, argyranthemums (this year) and gerberas as well. Typically, that’s all the maintenance those plants get. Nor has Adam been in the habit of pinching off coleus flowers although that could change down the road. “It’s good to see which ones do bloom because as you’re picking plants to grow at your operation in the future, you might not want the blooming type if you don’t have the maintenance to keep up with it.”
“We haven’t had too much trouble with downy mildew but there’s a little bit on this Great Falls Yosemite (Dummen Orange) which is discoloring the leaves a little bit. We do maintain a spray program out here as needed. We come around once a week with an air-blast sprayer treating what needs to be treated. We had a beetle battle; I think everyone has had once this year but the battle is won, at least for the time being.”
“We usually have everything from 288’s up to even three inch pots that are shipped in to us for this trial. We will standardize that across the board by putting them all in 4 ½ inch pots, growing them for awhile until they are about the same size; then we put three of the four inch pots into the five gallon pots…In the summer when the sun hits those containers, the temperatures can soar to 140 degrees on the south wall of that container, which is a challenge for us. Couple that with our hot and humid climate, and you see what we deal with every year.”