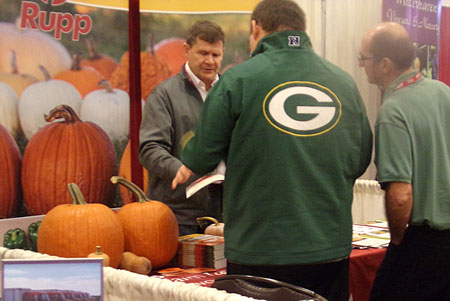 Providing educational programming for growers of fresh produce for the past 20 years, the annual Wisconsin Fresh Fruit and Vegetable Conference took place Jan. 26 – 28 in Wisconsin Dells, WI. According Brad Maenner of the Wisconsin Apple Growers Association, the annual event draws more than 650 growers and farm market managers each year from four states across the Midwest. “This year’s conference registrants were from Minnesota, Michigan, Illinois and Wisconsin,” he said.  The conference’s 66-vendor trade show showcased the latest products in everything from seed and plant sources to equipment, growing supplies and product packaging.

“We offer 80 educational sessions in seven tracks including vegetable, apple, berry, grape, farm market, winery and agritourism,” said Maenner. Speakers hailed from the universities of Wisconsin and Illinois, Michigan State and Cornell. Representatives from the Wisconsin Department of Trade and Consumer Protection (DATCP), the Wisconsin Department of Tourism and industry experts in plant disease, entomology, law, finance and marketing rounded out the conference’s educational component. Program sessions were scheduled so that attendees could participate in more than one track of interest.

Mohammed Babadoorst, professor of plant pathology at the University of Illinois, presented current research findings on plant diseases. His work provides growers effective disease management strategies for cucurbits (melons, cucumbers, squash, gourds and pumpkins) and other vegetables. His reseach program emphasizes pumpkins and has collected and analyzed samples of powdery mildew in nine states across the country over the past decade.

“There is considerable genetic variation in the powdery mildew fungus Podosphaera xanthi,” Babadoorst said. “Because of that, it is important to test the efficacy of your pumpkin spray program annually to make sure it is working on the particular strains of powdery mildew. A program that worked in 2019 may be less effective in 2020.” He stressed that the key to all disease control is to scout and monitor your crops and start fungicidal control early. Spray applications should begin at the first sign of disease. General spray considerations include making sure you have thorough coverage of under leaf surfaces as well as the canopy.

“Downy mildew in pumpkins can be a devastating disease when it occurs in your crop,” he said. “The good news is that this disease may not occur in your growing area.” Growers can access cdm.ipmpipe.org, which monitors reported outbreaks of downy mildew in real time during the growing season across the country.

A third disease concern addressed affecting cucurbits, peppers and other vegetables is Phytophthora blight. In pumpkins it causes damp-off, vine infection and fruit rot. “While there are peppers resistant to this, there are no resistant pumpkin varieties,” Babadorst said. He added that the key to controlling the disease is seed treatment, crop rotation, timely fungicide application and overall sanitation at all stages of crop production, including the storage containers of finished fruit.

The three-day industry event was sponsored by the Wisconsin Apple Growers Association along with participation by other state agriculture groups including the Fresh Market Vegetable Growers, Grape Growers, Berry Growers and Wisconsin Winery Association.