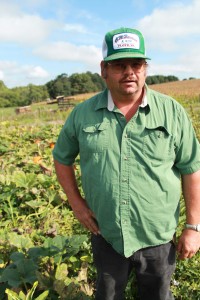 by Karl H. Kazaks
GLADESBORO, VA – Danny Cassell has been farming since he was big enough to walk behind the cabbage setter. He bought his first tractor in 1976. Today he is a fulltime farmer and has been for eight years, growing mainly pumpkins and sweet corn but also collards, kale, acorn, butternut and spaghetti squash.
Cassell grew up helping his grandpa and uncle grow cabbage, an endeavor that here in the hills of Carroll County was once as common as growing tobacco or milking cows was in other parts of rural America. Cabbage growing, though, like other parts of American agriculture, has seen a decrease in the number of participating farmers.
At first Cassell continued with the family tradition, growing cabbage while working a series of public jobs to help fund the farm. The economics of cabbage kept getting worse, though, so Cassell stopped growing the brassica in 1992. Up until this year.
“I had plowed up an extra three acres,” Cassell said, so once he ran out of his collards and kale starts and couldn’t find any more greens to plant, he bought some cabbage plants and grew the crop for the first time in decades. And he’s satisfied with the return. “Cabbage is coming back,” he said. Cassell is assisted in his farm efforts with his wife Darlene, one part-time hand, and eight migrant laborers. With 130 acres of crops, he’s at the most he can tend to.
The bulk of the acreage is split between sweet corn and pumpkins, with about 12 acres of the specialty crops. This year Cassell is growing two varieties of pumpkin: Gladiator and Cronus.
Gladiator has been shown to be a good producer in the area since its introduction about a decade ago. Cassell has been growing Gladiator for years and likes the variety for its consistent production and good size, producing a 30-40 bin count which is what some retailers like for mid-size carving pumpkins.
Cronus is a larger variety, providing about 15 or 18 per box. It has a somewhat bumpy surface, good ridges, and a firmly attached handle.
Cassell markets his pumpkins through Bottomley, which in turns sells to large accounts such as Wal-Mart, Sam’s Club, Food Lion, and Harris Teeter. He also markets some of his corn through Bottomley, taking it direct from the field to their chiller.
This year, his corn was so big he had to take a couple ears out of each box because otherwise they wouldn’t fit. So instead of 48 ears per box, it was usually 46. He averaged over 450 boxes per acre, harvesting five different plantings, each a whole field of roughly 10 acres, planted in one-week intervals.
Cassell sells his greens typically to Rawl Farms, and sells much of his specialty squash through the Farmers Market in Hillsville. This year, he even grew a little bit of peppers.
To help pollinate his crops, Cassell rents beehives. Located as he is in a rural part of the commonwealth, bear pressure is a real problem, and has impacted the rented hives in years past. To protect the hives, Casell know keeps them in his cattle trailer, on a stack of pallets so the top of the hive is level with the horizontal slats in the trailer.
Cassell keeps cattle, too, a cow-calf herd, and grows hay. For a decade after he quit growing cabbage in 1992, the only farming Cassell did was make hay and raise cattle, plowing his earnings from non-farm job into farm equipment, in anticipation of the day he could get back to farming.
His years of effort haven’t failed to be noticed. This year, his farm was featured in the Virginia Pumpkin Growers’ Association Field Day.