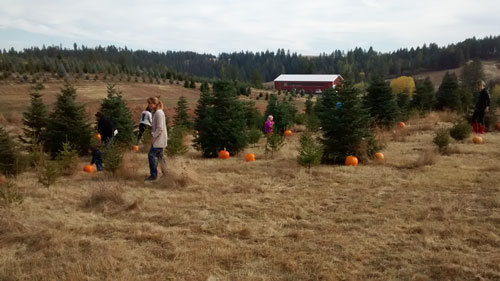 Founded on a passion for farming, trees and family traditions, Spring Valley Family Tree Farm has grown and prospered for over a decade in northwestern Idaho.

Owned and operated by Paul and Annette Brusven, Spring Valley offers the community of Troy, Idaho, Christmas trees galore and so much more.

Annette and Paul, who studied horticulture and agricultural mechanization, respectively, at the University of Idaho, purchased the 30 acres on which Spring Valley sits in 2005. The farm was open for business in 2008.

“I grew up in a family that raised Christmas trees,” Annette said. “I was brought up learning to grow and care for them. Paul comes from a long line of farmers stemming from both sets of his grandparents.” With Paul’s interest in farming and Annette’s passion of growing trees, the two decided to blend their backgrounds and develop a tree farm with the focus of “growing trees and providing an experience that families would enjoy.”

Of the 30 acres, 12 are dedicated to Christmas trees. Originally growing between 12 to 15 different breed of conifers in its earlier seasons, Spring Valley now focuses on seven to eight key breeds. According to Annette, “Grand firs are our best sellers. But we also have a lot of success with the blue spruce, which is somewhat surprising – they are very pokey! But they are so beautiful and have turned out to be very popular here.” Customers are able to purchase pre-cut trees on site or can select and cut their own. Guests looking to memorialize their trek for a treasured Tannenbaum can have their photo taken in Spring Valley’s horse-drawn sleigh, that originated on Paul’s great-grandparents’ farm in North Dakota and which was fully restored by Paul’s father.

Spring Valley has done very well since its opening. In recent years, the number of trees sold has been increasing by about 100 trees per season. Last season saw over 700 trees sold. “Our goal is to eventually be selling at least 1,000 trees per year,” Annette said. The business is very much a family affair, and the couple’s daughter, Tessa, and son, Cole, take an active part in working the farm. Of the three to four seasonal employees needed during the holiday season, Annette explained, “We pretty much just hire our son’s high school friends.”

A prime example of Spring Valley’s expansion is its Pumpkin Fest. Last year marked its fourth season, with Pumpkin Fest starting the third weekend in October and running through Halloween. Patrons can take part in hayrides, face painting, carnival games and the “Spring Valley Pumpkin Hunt.” According to Annette, “We hide the prize pumpkins among the Christmas trees and the kids race around hunting for them. They have a great time!” Pumpkin Fest also features apple cider made on site at Spring Valley. In order to keep up with the demand for pumpkins, Spring Valley dedicates over half an acre of its land for a pumpkin patch.

The barn at Spring Valley now houses the farm’s retail operations. “We really want to emphasize local talent at our gift shop, which we have in our barn. We’ve set up 18 to 20 stalls that feature arts and crafts – all handmade, all done by local artisans,” Annette said.

As Spring Valley continues to evolve, so do Annette’s plans for expansion. “We’re now open from Pumpkin Fest through Christmas,” she said. “We’d like to have a more year-round presence by having something for every season. We’re working on some ideas now…like selling daffodils and having an Easter egg hunt in the spring, and selling lavender and blueberries at a summer blues festival, complete with a blues band.”