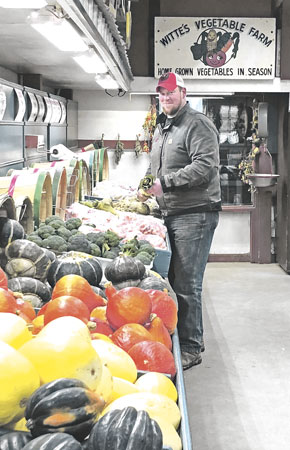 “My great-grandfather and grandfather moved from the Milwaukee area because the area was becoming too developed for farming,” said Scott. “They purchased a 40-acre farm and started truck farming. They grew mostly cole crops – cauliflower, broccoli and cabbage. We took it by the truckload to Milwaukee for wholesale and sold the seconds to local residents.”

Scott’s father eventually transitioned to direct marketing in the late 1970s. “We work on quality over quantity,” said Scott, adding that Witte Farm’s clientele have remained loyal. “We don’t do much wholesale now – 99 percent of what’s grown is sold from the farm.”

Today, the farm includes 120 acres and an additional 20 rented acres. Scott manages the field work while his sister Susan Atkinson runs the farm stand. Scott said the farm’s proximity to Milwaukee translates to a good customer base, and the majority of produce sold is through the on-farm market and U-pick.

Crops are grown on about 70 acres each season, allowing some fields to rest. “We grow a lot of crops in small amounts for quality throughout the growing season,” said Scott. “We want consistent quality and low quantity to keep everything fresh.”

Soil throughout the farm varies, and Scott has learned what grows best in each location. Many of the fields have tile drainage, and Scott plans to add more. “On some of the farm there’s a good mixture of two feet of rich topsoil and sand, and everything underneath is clay,” he said. “We also have sandy loam with clay underneath, which is great for carrots because they grow long and straight.” Because the soil is more likely to retain water, there’s no irrigation on the farm other than a drip system in the high tunnel.

One aspect of Scott’s growing plan includes using small plots along with a rotation system. “We never grow crops in the same family on the same ground for three to four years,” he said, adding that soil management is also part of the growing plan. “That’s why we like growing on a lot of small plots – about one-half acre to an acre at most.”

Witte Farm’s customers look forward to seasonal favorites including fresh tomatoes. Scott first grew tomatoes in a high tunnel, but disease became an issue by the third year. He has since figured out a growing system that includes grafted tomatoes. “After I started to graft, the yield from the 30’ x 96’ house was 9,000 pounds,” he said. “Some were seconds, but all were saleable.”

Scott found that grafting results don’t necessarily mean disease resistance, but he has noticed stronger plants that can withstand extremes. In February, Scott starts seeds for both rootstock and scion plants. He uses the high tunnel to grow the first crop of tomatoes, then starts field production for the rest of the year. 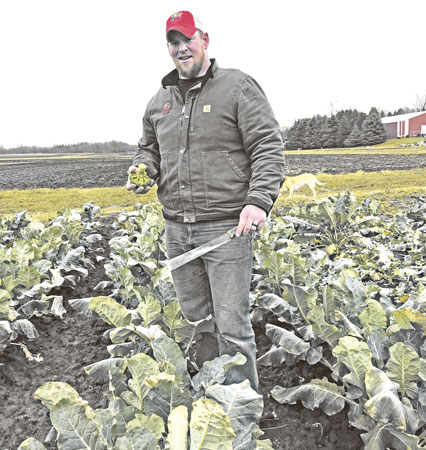 While some customers often tire of sweet corn by the end of summer, Scott said they’ll continue to purchase tomatoes. “With tomatoes, people wait until the last minute,” he said, explaining some of the challenges of a U-pick system. “We had hail last year in August, right before peak season, and it completely ruined our season. This year, everything was doing well, then the rain came. We spread tons and tons of gravel so people could get to the fields to pick.” Scott added that what customers wanted was ready and available prior to the rain, but they waited too long and tomatoes were no longer plentiful.

When selecting vegetable varieties, Scott relies on a combination of reliable favorites and recommendations from others. “I’m always trying something new,” he said. “A new variety or even different veggies. I’ve grown bok choy, colored potatoes and a lot of other vegetables not everyone likes but there was a market.”

Since adding lettuce to the crop line-up about eight years ago, it has become popular with customers. Each season, Scott selects seven to eight heat-tolerant varieties that are slow to bolt. “It’s a relatively low-input crop, we get a lot of out it and people really like it fresh lettuce,” he said. “I do about seven plantings through the season, and as a variety matures, I’ll clean that one out if the next one is ready. We grow everything from Romaine to red butter crunch.”

With proximity to Milwaukee, the Wittes have been successful with the U-pick aspect of the farm. Field-grown traditional favorites include green beans, peppers and tomatoes, but some customers come for pinto beans, mustard greens and turnip greens. “We have a lot of Russian customers from the Milwaukee area, and they like a certain shade of yellow pepper,” said Scott, adding that his dad worked with those customers to find out what they wanted. “They pick about 75 percent of the yellow peppers we grow.”

Scott plans for a series of sweet corn plantings to ensure a steady crop throughout the season. Most years, he plants every seven to 10 days depending on the weather. He starts the first crop under plastic, followed by a seeding that’s transplanted to the field. “Then I direct seed with a non-Bt variety for four plantings, then plant several Bt varieties close together.” Scott explained he switches to Bt corn by a certain date because he knows when worms will become an issue. His favorite variety is Anthem II, which he says is one of the only Bt varieties developed for flavor.

Although some growers might not agree, Scott has found that cole crops are among the easiest crops to grow because that’s what his family has been growing since the farm started. However, wire stem (a Rhizoctonia) has been a challenge. “We have more problems with it than some other growers because we’ve been growing cole crops for 75 years,” he said, adding that IPM wasn’t practiced years ago. “We scout like crazy, but the only thing I spray on a schedule is sweet corn.”

Whenever possible, Scott establishes cover crops, usually winter rye. He treats it as a green manure to build organic matter. “We like to stagger so every piece of ground has a cover crop every two to three years,” he said. “That helps build the soil.” Scott has considered growing rye then direct seeding pumpkins on it.

In the future, Scott’s sister Sue would like to add an on-farm kitchen to process excess produce. Scott has found that the most available and willing workers are newly retired people who don’t always have the physical capacity for every aspect of farm work, so he plans to add more mechanization to the farm to improve efficiency. “I invented a self-propelled picker after college,” he said, adding that the machine can be used for weeding and other field tasks. “The operator can recline on it and use their feet to steer it. I want to build more of these for older workers – it will be less taxing on their bodies.”

Visit Witte’s Vegetable Farm online at www.WittesVegFarm.com and on Facebook.