Real Christmas trees remain a popular treat for the public and with fussy deer, too 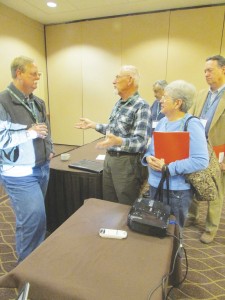 by Pat Malin
LIVERPOOL, NY – The unusually mild winter of 2015-16 has been a blessing for some people. Can it also become a curse for Christmas tree farmers in New York State?
Many of the farmers were pleased to see a robust business in early November. Farmers attending the Christmas Tree Farmer’s Association of New York’s recent convention reported that the public took advantage of rare good weather last fall to personally pick out a homegrown conifer.
The CTANY held its annual winter convention at the Liverpool Holiday Inn and members shared tales of the latest season.
Statistics show the deer population is likely to increase due to the mild winter we’ve experienced thus far. A lack of deep snow cover allows deer to browse native foods, plants and nuts, and maintain the strength to outrun predators. The bare ground might deter deer from scaling fences to chomp on the tender needles of young Christmas trees but it doesn’t necessarily mean Christmas tree farmers can sleep soundly throughout the entire season. While they continue to battle this nemesis they do have a number of options to avoid having these four-footed “grinches” gobble up their profits.
Dr. Paul Curtis of Cornell University gave a well-attended presentation for new and established growers. He said farmers could place cones on top of seedlings or wrap the trunks in chew-resistant material, though it can be cost-prohibitive, not to mention time-consuming for growers with large acreage.
Farmers can also use chemical deterrents or grow deer-resistant tree species. Guard dogs, or simply an alert family dog can scare deer away. Installing electric fences is a workable, but more expensive solution.
Farmers should first determine deer patterns; the foods they browse, their travel habits and how they are affected by winter weather. Farmers can also plant favorable crops to lure deer away from their trees.
Chemical deterrents, targeted for deer, rabbits, voles and other wildlife, are the least effective method, said Curtis. Chemical sprays or granules do reduce tree damage, but only when deer pressure is light or short-term. Such deterrents need to be applied frequently throughout the year, approximately every 10 weeks depending on precipitation.
Fencing can be successful for larger farms and when damage is moderate to heavy. Curtis recommended eight-foot high fencing made of tightly woven fabric.
Planting a variety of species is another alternative. Studies by Cornell University reveal that a majority of deer (more than 90 percent) prefers to munch on fir and balsam trees. Another 70 percent of deer will select blue spruce, whereas red pine is least tasty (chosen by 19 percent).
One of the seemingly easiest and cheapest solutions is to allow deer hunting on farmland. It is a win-win situation for farmers, landowners and hunters, as long as the parties adhere to the guidelines.
The first requirement is for farmers to consult their state, village and town ordinances. Starting with the state Department of Environmental Conservation (DEC), regulations are very precise.
If farmers grant permission, hunting can occur out of season. Landowners who have at least 50 contiguous acres are given preference in obtaining deer management permits. Hunting typically is permitted from sunrise to sunset and the season generally ends before Christmas in most of New York State. The DEC allows deer hunting throughout the month of January in heavily populated Suffolk County.
Those who hunt on farmland can take more does and antlerless deer than typically allowed. They are permitted to hunt at night and use spotlights to attract deer, which is not permitted in a conventional hunting season.
“Harvesting female deer is strongly encouraged,” Curtis told the audience.
Southeastern New York — much of which is rural and includes forests bordering the Catskill Mountains — has the highest density of deer taken per square mile, an average of 10.1 per farm, Curtis’s statistics revealed.
Despite the deer problem, Curtis said just 31 percent of New York State farmers have applied for deer hunting management permits. Surprisingly, 15 percent of farmers who had applied for permits told the DEC they had difficulty finding designated hunters to take on the challenge.
Curtis asked tree farmers to evaluate the costs of implementing alternatives, chemical deterrents, installing electric fences, applying for hunting permits and planting a variety of species, compared to the loss of their trees over an eight to 10-year period, which is considered the marketable age of a tree for insurance purposes.
Peter Brooks of Saratoga County is a novice, part-time tree farmer who just joined the Christmas Tree Association of New York board of directors. He took over a family farm in Malta four years ago and converted it to growing flowers and trees. He has a fulltime job as a financial planner and lives in a nearby town.
His farm consists of 15 acres and 25,000 young trees, so he was extremely interested in learning how to prevent damage from deer. He said he planted Fraser firs, which is preferred by his customers (and obviously, deer).
“I’m still making mistakes to learn from,” he joked after getting advice from Curtis on electric fences. “I haven’t sold any trees yet — they take up to 10 years to mature. I talked with many farmers and they told me deer hit them hard. I get some deer damage, but I think getting hunting permits would be like baling out the ocean.”
His solution was to install two four-foot high electric fences, which is about half the recommended height. However, he discovered that this height deters the wildlife if installed in back-to back rows about three or four feet apart.
“Deer have poor depth perception,” he explained. “They get confused by the second fence. If they try to smell it, their noses will get zapped harmlessly.”