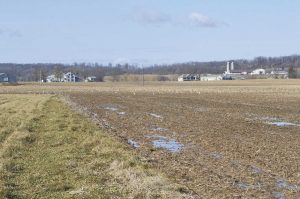 by Steve Wagner
In 1911 Maricopa County AZ, the Spur family began to farm about 15 miles west of Phoenix. In 1956 Spur’s successors began to develop feedlots, and in May of 1959 developer Del Webb started planning a retirement community to be known as Sun City, about 10.5 miles north of the Spur feedlot. By 1965, the Del Webb community had expanded to within 500 feet of those feedlots. The proximity of the feedlots to the retirement community was bound to cause issues, and did. Some tenants had already moved in, but the fragrance of manure and accompanying flies started to inhibit housing sales. Del Webb filed an injunction against Spur that would have forced Spur to either halt or move its business. The court granted the injunction but required Webb to pay moving costs or the cost of shutting down. This, of course, was prior to right-to-farm laws. Consequently, there was nothing Spur could do to combat these nuisance claims. Because Spur was there first, it prompted the question ‘May lawful businesses that prove to be a nuisance be required to move or cease operations?’ The answer, according to the court, was yes.
Elaborating on that ‘yes’, according to Ashley Ellixon, Extension Specialist, University of Maryland, the court maintained that, “Spur was a public nuisance which meant it was a danger to public health because of the large community that Del Webb had created.” Furthermore, it was not due to any wrongdoing or unlawful acts by Spur since Del Webb knowingly came to the nuisance. This was the crux of an argument in a recent University of Maryland agricultural webinar.
Due to cases similar to Spur, legislatures in the 1970s maintained that these types of issues threatened not only individual farms but the food supply as well. This spurred (if you’ll forgive the pun) legislatures in all 50 states to enact right-to-farm laws (RTF). RTF laws are statutory rights, written laws, set out by local or state governments which bestow a right, but which are secondary to higher constitutional laws. Generally speaking, RTF laws are centered on seven areas:

Looking at recent litigation, it is easy to see that it runs the gamut from pig farms to GMO farms to marijuana farms. Five lawsuits were filed in 2009 in east central Indiana against swine farms alleging that hog production odors were interfering with the plaintiff’s ability to use their own properties. If there was something that didn’t smell good in these suits, it was the fact that all plaintiffs had the same lawyers. “The plaintiffs testified in their own deposition,” said Tiffany Lashmet, Assistant Professor and Texas A&M Agrilife Extension Specialist, “that odors did not impact them on a daily basis, despite the complaints they had filed which said they did. They also admitted that they had no knowledge of the allegations in the complaints.” Furthermore, plaintiffs admitted the allegations actually came from the attorneys. “Obviously, that was a pretty important piece of evidence for the defendants in these cases,” Lashmet said. Defendants moved for summary judgment based on the Indiana RTF laws. All cases were dismissed. (There is no attorney fee provision in the Indiana statute).
In 2014, in Oregon, a local electorate voted to ban GMO crops in Jackson County. In the wake of that action, eight alfalfa farmers avowed that the vote was trying to countermand Oregon’s right-to-farm law. Oregon RTF law provides that “any local government regulation that makes a farm practice a nuisance or a trespass is invalid with respect to the farm practice.” Damage to commercial agricultural products was an exception. A U.S. District Court held that RTF did not apply in this instance, but rather that the “purpose was protection from urban encroachment, not protection for a particular farming practice like growing genetically modified crops.” Furthermore, the court posited that the purpose of the ordinance was to prevent genetic drift damage to neighboring non-GMO farmers. In the wake of this judicial logic, farmers settled the case.
Turning to the issue of marijuana farming, Oregon’s Governor Kate Brown signed a bill specifying that local governments may create reasonable regulations about where and how farmers can grow marijuana regardless of the RTF statute. Most statutes have exceptions if farming activity violates state or federal laws. Importantly, says Lashmet, “this will likely prevent protection for marijuana growers.”
Paul Goeringer, a University of Maryland Extension Legal Specialist, asks the question ‘Is there a constitutional right to farm?’ “Current Right to Farm laws, as they exist now, serve as a nuisance defense,” he says. “We are seeing more and more states working to add Constitutional protections,” perhaps to prevent encroachment from environmental laws or laws dealing with animal welfare. Currently, there are few court decisions dealing with these specific issues. In 2012 and 2014, North Dakota and Missouri, respectively added constitutional provisions to address specific areas of concern. States considering it include Oklahoma (it is on the November 2016 ballot), Nebraska and Indiana. Animal welfare groups have successfully lobbied for such provisions that “will affect a lot of farmers,” Goeringer says.
To be clear, North Dakota’s constitutional amendment states, “The right of farmers and ranchers to engage in modern farming and ranching practices shall be forever guaranteed in this state. No law shall be enacted which abridges the right of farmers and ranchers to employ agricultural technology, modern livestock production and ranching practices.” Missouri’s constitution says basically the same thing, and so does Oklahoma’s. But Oklahoma waffles a bit on the wording. The caveat is worded this way: “The Legislature shall pass no law which abridges the right of farmers and ranchers to employ agricultural technology and livestock production and ranching practices without a compelling state interest.” Here’s the question: Will water quality or other environmental laws be compelling state interests? Since Oklahoma’s constitutional amendment has not yet passed, it is pointless to try to guess how the farmer might fare when laws butt heads. It gets to a point where legal language is parsed and meanings are vague, intent is either buried or open to interpretation when push comes to shove in a court of law. It’s called Waffling room, and is often deemed the most correct of the politically correct.
Right-to-farm laws will not trump federal laws or the Federal Constitution. States will still have to comply with federal laws and regulations such as Waters of the United States (WOTUS), the Resource Conservation and Recovery Act (RCRA), or the Community Agriculture Alliance (CAA), to name a few. “Litigation will tell us the bounds of the right-to-farm amendment,” says Goeringer. “Constitutional right-to-farm amendments offer broader protections than right-to-farm laws. The true impacts of these amendments are not currently known.”