Red Fire Farm and the secrets for success 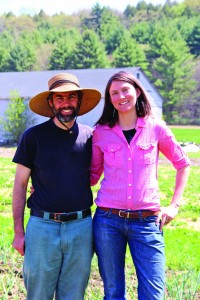 Keeping land as farmland is another not-so-secret component. The Voilands are finalizing a contract with Mount Grace Land Conservation Trust, that will purchase their 100-plus acre Montague farm for $400,000, (raised in the trust’s first Campaign for Affordable Farms fund drive) and in turn, give them a 99-year lease. The couple keeps the buildings. “The land trust owns the land under the buildings. We are linked going forward. We will still have a mortgage,” but less interest overall to pay. Improvements such as new roofs increase their equity.
This hybrid relationship will not bring about “super dramatic results right away.” It is a long-term plan keeping with Voiland’s vision, gained from observing farmers since middle school, when he started farming his parents’ home garden in Montague and selling crops at Old Depot Garden farm stand, an operation he still manages.
“They farm away their whole life and don’t have any assets other than their land,” said Voiland. “When it comes time to retire, they sell off land as house lots so they have money to live on. I think that’s a real tragedy. This arrangement will ensure this land will not become houses.” It will remain as affordable agricultural land should he and his wife chose to leave farming. He is not dictating it must remain organic should they sell, one of the final details being ironed out.
Through high school and his time at Cornell University, Voiland farmed his parents’ one acre, and 10 rented acres. After graduating in 2001, he set out to see if he could make a living farming full time, and looked for farms to buy. He found one in Granby, met his wife Sarah, and rented 25 more acres.
Renting land provided no land security. “It was too risky. The 25 acres of land could be pulled out from under us in winter.” In 2009, they bought their Montague farm, just two miles from his parents. He started working with Mount Grace, and putting land in Agricultural Preservation Restrictions.
Six staff reside at the Granby farm, and that land has seven high tunnel greenhouses. Montague has one high tunnel, assorted smaller greenhouses and two tobacco barns. Separate staff work each farm. Boston CSA members visit Granby to pick-their-own.
The Voilands grow 40 to 50 crops with multiple varieties. “We’re trying to have as much crops in season as long as we can, always planting a new batch. It’s pretty organized,” Ryan said.
Onion fields are covered with silver plastic mulch. “The silver color seems to deter onion thrips, which can be a pretty big problem,” said Voiland. Aphids in the tomato greenhouse entail a consult with their weekly visiting IPM person to determine the species, and a probable recommendation to put the female wasp Aphidius Colemani, an aphid predator, in the greenhouse.
They employ 20 people year-round, and at peak season, 80 to 90 people are on the payroll.
Greenfield resident Kristi Ceccarossi, who began as farm/operations manager this past year, hires the summer crew and oversees harvesting and packing on both farms.
“It’s a really hard thing to cultivate good people. We really want to retain good people at the farm. We invest the time in training them, and giving them positions of more responsibility,” Kristi said, “with an objective to hire skilled managers and crew and cultivate them as long-term employees.”
They run several full trucks to Boston four days a week from June to October for Boston CSA members. CSA members want to support local, organic food, plus, “people want to have a relationship with the farmer and the farm,” said Ceccarossi.
“I think what’s unique for us as a farm our size is the diversity of crops we grow. Most farms our size have narrowed down to a few crops that they sell wholesale,” she said.
“We’re trying to make it as viable as possible, creating quite an economic impact, providing jobs and food,” said Voiland. Luckily, the growing interest in local food coincided with his interest in farming. With land protected, long-term jobs are a reality.
Visit www.redfirefarm.com or www.mountgrace.org for more information.