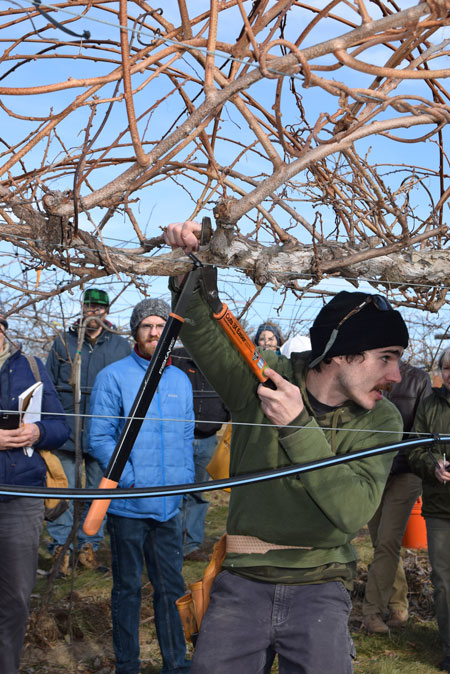 Vineyard manager Will Hastings showed a crowd of 30 interested people how to prune the cordon (or “arm”) of a seven-year-old female kiwiberry vine so that its fruiting potential is maximized.
Photos by Edith Tucker

From the outset, Hale’s goal was to develop improved, economically viable kiwiberry varieties for commercial production on small farms in the Northeast.

“With their general adaptation to the region, their attractive appearance, intense and complex flavor profiles, high levels of bioactive compounds and easy consumability, kiwiberries (Actinidia arguta) have long been recognized for their potential as a high-value crop in New England,” a UNH press release reads. “A tender, smooth-skinned relative of the fuzzy supermarket kiwi, grape-sized kiwiberries are tropical-tasting fruits that have grown in the backyards and private gardens of the region for more than 140 years. But despite this long history, virtually no commercial production exists.”

Regional market analysis and consumer research was conducted in 2016 at 22 farmers market around the Granite State, and both children and adults really liked these locally grown “pop-them-directly-into-your mouth” fresh fruits.

The acre-and-a-half vineyard at Woodward, soon to be enlarged by an additional half an acre, is designed to move the species out of backyard gardens and into commercial production, including at organic farms.

Hale and Hastings are co-authors of “Growing Kiwiberries in New England: A Guide for Regional Producers.” Hastings’ graduate studies included both cultivation and post-harvest methods for kiwiberry production.

Their online guide, at www.noreastkiwiberries.com, provides detailed, up-to-date and regionally relevant information, based on work supported by the New Hampshire Agricultural Experiment Station, jointly funded by the National Institute of Food and Agriculture, the USDA and the State of New Hampshire.

The open-row trellis system at the experimental plot is an impressive sight, reflecting the vines’ expected long lifespan and designed to ensure a high-quality product grown in a carefully configured “T-bar” layout. 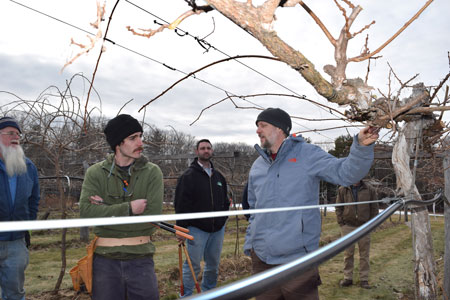 The two experts – vineyard manager Will Hastings (left) and UNH Associate Professor Iago Hale, who collaborated on writing the free online guide to growing kiwiberries in the Northeast – discussed their recommendations at Woodman Experimental Horticultural Farm.

Those on hand learned that economically viable kiwiberry production depends critically on the intensive management of vines supported by a robust trellis system. Apart from the vines themselves, this support infrastructure is arguably the most important and certainly the most capital-intensive element of a kiwiberry vineyard. In addition to supporting the sizeable fruit loads produced by commercially-spaced mature vines (up to 100 pounds per vine), a strong, well-constructed trellis system is required to bear the weight of substantial vegetation, as well as its associated ice and snow loads, during the winter months. A horizontal plane of vegetation resting directly atop support wires is the ideal canopy in a commercial kiwiberry vineyard.

Both Hale and Hastings talked about the many pluses of a T-bar system. It helps maintain clear separation between rows, facilitates access to pruning and simplifies the task of preventing within- and between-row vine entanglements. It also increases airflow, reducing humidity that increases the likelihood of fungal disease, provides access to pollinators and allows sunlight to help berries develop and ripen. The on-site research project has resulted in these experts making very specific recommendations on the installation of in-row support posts and many other aspects of production and harvesting.

“Proper site selection will positively influence kiwiberry vine health, maturation and productivity in the long term,” the two authors wrote, noting that “long term” can easily mean 20- to 50-plus years. “When considering potential sites, it is worth remembering that the kiwiberry is a woody, perennial crop planted at relatively low density (about 400 vines/acre); therefore, vineyards need not be limited to high-quality, flat and/or tillable agricultural fields… Vineyards should, however, be sited such that they receive full sun exposure that will accelerate vineyard establishment and maximize production.”

Successful kiwiberry production depends on understanding that male and female vines are required for fruiting. Female flowers are identifiable by the presence of a stigma and lack of viable anthers. At Woodman, one male vine is planted for every eight females. Importantly, their pruning regimens differ. Pollination may be achieved either by bees or wind. “There’s no nectar to draw bees to a female flower,” Hale explained, “but you still might want to bring in hives.”

After identifying a good site, time should be taken to develop it carefully, preparing a solid foundation for successful vine establishment and long-term productivity.

Vigorous pruning is essential, the two experts explained. “Don’t ever worry about how much you are pruning, but rather whether or not you are pruning hard enough,” Hale said. “You must expect to remove 75% to 80% of new growth. Remove all growth from the side of a trunk. Keep it clean.” At Woodman, he explained, they stop pruning about mid-August, since the remaining branches won’t have time to get “woody” to be able to survive cold or freezing temperatures. “We resume pruning in November,” Hale said.

There has been a lot of confusion about the names given to several of the kiwiberry varieties or cultivars, Hale pointed out. He is now working with Hartmann’s Plant Company of Grand Junction, MI, in order to certify and validate kiwiberry varieties. He expects that the price charged for each vine will drop sharply, increasing the likelihood that farmers going into commercial production can make a profit. Hale believes it’s best to plant rooted vines and not to graft them.

Hastings explained that best practices call for sanitizing bypass loppers and hand pruners in order to avoid spreading pathogens, such as canker. Given the whip-like tendencies of released leaders, he recommends both safety glasses and a multi-pocketed tool belt.