Returning to the farm: Oregon grower finds her roots in organics 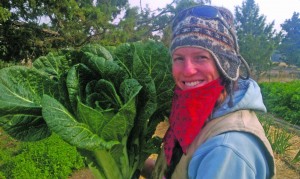 by Sally Colby
Sarahlee Lawrence was born and raised on a farm in Terrbonne, OR, but leaving the farm is what made her realize that was where she belonged. Lawrence received a degree in environmental science, then spent the next five years as an international river guide before returning to the farm.
“A lot of it was just coming home,” said Lawrence, explaining her return to her parents’ Oregon farm. “Being a steward of this land and playing a bigger role in my community was a big part of it — realizing the importance of food and the impact food has on our world, our bodies and our community.” Lawrence says that her formal education has given her a better understanding of the natural world and its relationship with agriculture. Today, Lawrence and her partner Ashanti are currently growing certified organic crops on 80 acres; ten of which are devoted to vegetable crops. They have ten high tunnels, one of which is a four-season greenhouse that she constructed of straw bales.
“The four-season greenhouse is really important because I start things really early,” said Lawrence, adding that the seeds she recently planted are growing. “We have a very short growing season — it freezes through mid-June and starts to freeze again in August. The other houses are mostly for season extension.”
Two large structures are used almost exclusively for growing tomatoes, eggplants and peppers. The rest of the greenhouses are used for early June crops and protecting summer crops such as squash. With crops under cover, Lawrence can count on an earlier harvest and extend the harvest further into fall. “I grow all winter long in seven houses,” she said. “We have a lot of sun, but it gets cold. It didn’t get above 10 degrees for six weeks.” This year’s tomatoes are already started in the four-season greenhouse, and Lawrence will transplant the seedlings into a high tunnel in June for the first tomatoes in July. Lawrence grows 30 different heirloom tomato varieties including favorites such as Golden Treasure, Gold Medal and Black Krim.
About 25 acres of the farm is devoted to growing hard red spring wheat.
“We combine it ourselves, clean and mill it,” said Lawrence. “We also feed to our animals. We sell in three-pound packages or two-pound bags of flour.”
Rainshadow Organics offers a year-round, full-diet CSA with 85 members. Shares are delivered once a week at the Bend, Sisters and Redmond farmers’ markets. With about 50 different vegetables and more than 200 varieties, Lawrence can provide a colorful and nutritious array of produce throughout the season. Spring vegetables include early cool-season crops such as carrots, beets, snap peas, lettuce and broccoli. As the season progresses, shares include beans, cabbage, cucumbers, melons, potatoes and parsnips. Lawrence also grows herbs, and adds bunches of basil, thyme, oregano, tarragon, rosemary, mint, lovage and cilantro as those crops are ready. Rainshadow Organics also offers a winter full-share, which is delivered monthly, and includes winter squash, potatoes, kale, spinach, collards, onions, garlic, lettuce and Swiss chard. The winter share also includes chicken, pork, beef and freshly milled flour. In addition to CSA shares, Rainshadow Organics also sells directly at the same farmers’ markets.
Rainshadow Organics has several CSA share plans available, from a small vegetable share to a winter full-diet share. Customers can also sign up for a summer work share, which commits them to working at the farm one day a week throughout the growing season. For those who enjoy full-course meals featuring fresh organic produce and meats, Rainshadow Organics hosts longtable dinners on the farm in summer and early fall.
Fresh flowers are available throughout the growing season. Customers can arrange to pick their own flowers by appointment. Rainshadow Organics also offers flowers for weddings, and will fill special requests for certain flowers.
Living in a region with only seven inches of rainfall annually means that irrigation is required. Water from the local irrigation district is distributed through drip irrigation system. Lawrence avoids using plastic on the ground whenever possible; instead using composted manure produced by chickens, turkeys and horses on the farm. “I turn it aggressively for two months, then tarp it over the winter,” said Lawrence, describing how mulch is produced. “Then I apply it in spring.” Lawrence uses an injection system to add compost tea, worm tea and fish fertilizer to crops that require extra fertilization.
Crop rotation helps minimize pests while making the most of available nutrients. Cover crops help keep soil covered and moist throughout the year. Lawrence uses Austrian winter peas and hairy vetch for winter cover, and buckwheat, ryegrass and clover in summer. “We mow it several times, then turn it under,” she said. “I try to get the maximum biomass from it. It’s a good weed suppressant.”
Lawrence maintains a blog on the Rainshadow website to keep customers informed about what’s happening at the farm. The farm also has a Facebook presence where customers can see photos of the farm and find out what’s happening throughout the year.
Visit Rainshadow Organics online at www.rainshadoworganics.com.