Returning to the farm 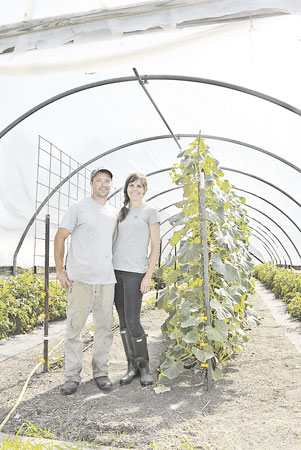 On a summer morning, Marco Patzer is teaching a new employee how to wash freshly picked produce while his wife Laura trims the stems of fresh-cut flowers. The vegetables and blooms will be added to the produce offered in the farm store at Cherry Rock Farms in Brandon, SD.

The Patzers are relatively new to produce farming, but Marco’s family is not. The family has been growing produce since 1925, and Marco and Laura moved from Ohio to continue the business. This is the family’s fifth year of growing, and they’re learning as they go with the help of Marco’s father David.

When the Patzers arrived on the farm, the crops for that season had already been planted, so the young couple focused on preparing the market, selecting crops for the following year and learning more about the business. Laura said it was a good time to arrive because they didn’t have to figure out the details of planting and cultivating their first year and could concentrate on the latter part of the season.

“We arrived when the market was getting ready to open that year,” said Laura. “It’s been a learning curve for us to figure out when to plant, but Marco’s father operated the farm for many years so we rely on him for how and when to plant.”

The farm is located on a quarter section, or 160 acres, and the Patzers are currently farming about 30 acres. Laura said being a relatively new grower offering a large selection of vegetables is somewhat daunting, so they’re expanding slowly. “Our hope is to eventually farm the whole acreage,” she said, adding that they’ll expand as they learn what customers want. “We’ll do a lot of wholesale work with restaurants and see what they want.”

New to the farm market is a cold room, maintained at about 65°F, to keep fragile produce fresh for customers. The Patzers sell their own eggs, and have worked with several other local producers to offer meats, honey and other farm stand products. In addition to popular vegetables, the family grows a number of specialty crops in small quantities as an experiment to see what works prior to committing significant acreage.

“The nice part about having our own market and being open is that we get a chance to educate customers,” said Laura. “At a farmers market, it’s so busy with people grabbing things and checking out. We have a nice constant flow throughout the day, and can ask people if they’ve tried different vegetables.”

In autumn, Cherry Rock Farms offers several activities. “We looked at what attracted us when we were a young family in Ohio,” said Laura. “We have a pick-your-own pumpkin patch and a corn maze, and we allow families to go to the field to walk around and find a pumpkin.” At planting, Marco tosses an assortment of pumpkin seeds in the hopper to create an assortment of varieties throughout the field, and Laura said they’ve received good feedback on that.

Laura said it’s fun to share what they’ve been doing on the farm when schoolchildren visit on field trips. She compared the changes in the farm to what they had been accustomed to in a more metropolitan area of Ohio where the “buy local” movement was already strong. “We’ve really seen it catch on in the past several years, and I think it’s going to continue to grow,” she said. “They like to see us and our kids, and like to know where food is coming from.”

Farm visitors can also spend time in the corn maze, which was planted late due to wet spring weather, and Marco will cut the pattern using a walk-behind brush mower. “We’re trying to attract smaller children, so we thought it would be better to have a larger pumpkin patch and a smaller corn maze,” he said. “Next year we’re going to go bigger with both.” Although there’s ample acreage available for expansion, Marco said they’ll have to work through the logistics of parking, moving people to the field and probably adding a shed for wagons.

Cherry Rock Farms relies on several high tunnels to extend the growing season. “Our main goal is to get the earliest tomatoes we can,” said Marco. “That’s what people will drive across town to buy. We have to heat the houses for a week or two, so we have to balance whether that’s worth it – the propane bill versus how much earlier tomatoes will be and how much more we’ll make.”

Tomatoes are sown in early March and the seedlings are transplanted in May. “The goal with the new house is to open earlier in spring and stay open later in fall,” said Marco. “Because of that strategy, we may start everything a little earlier.”

Other crops, such as cucumbers, beans and zucchini, are planted in succession, usually several times throughout the growing season. “Sometimes we get a crop before frost,” said Marco. “If we don’t, the seed isn’t expensive so it’s better to put it in and potentially get some sales rather than wish we hadn’t run out.”

Sweet corn is one of the most popular offerings at the farm. Marco said sweet corn is available in the area in July, but it isn’t local. Although Cherry Rock Farms’ corn isn’t the earliest, it’s sweet. “We have the best corn you’ll ever taste,” boasted Marco, adding that the Ambrosia variety is a customer favorite. “We have a huge following and we take pride in that, and we don’t want to jeopardize that by having ‘early’ corn. We want to maintain the reputation of having the best sweet corn around.”

The Patzers have considered opening the farm to other vendors for a Saturday morning farmers market experience. “We can’t carry everything,” said Marco, “but we still want people to have a variety when they show up here.” They’re also looking into obtaining organic certification in the future.

Although the Patzers have had requests to start growing different vegetables, Marco believes they’re offering enough variety. “I’m on the tipping point of being spread so thin that we might not do it well,” he said. “We’re doing a good job now, and if we added another crop or product, we might not be doing everything great.”

Marco said one thing in their favor as they learn to build the business is the long-standing reputation of the farm. “My dad was running it by himself and was nearing retirement age,” said Marco. “We weren’t living here, and nobody in the family was interested in taking it over. Laura and I had good careers in Ohio, but we decided it was important to do.”