Hemp has faded in and out of history, and its contributions have been easily forgotten. But efforts by citizens, researchers and lawmakers led to hemp’s removal from the Schedule I Drugs list in January 2019. 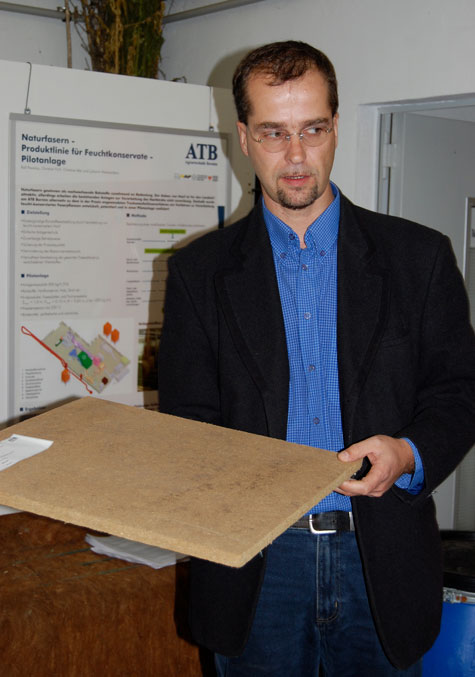 Germany and other countries have been studying hemp products such as this fiber board.
Photos by Sally Colby

The use of hemp for a variety of purposes is hardly new. References dating back to Mesopotamia and ancient China indicate that farmers grew hemp for food and fiber. Hemp was widely grown in North America beginning in the 1600s, but was banned in 1937 after the passage of the Marijuana Tax Act. New federal regulations that allow farmers to grow industrial hemp means there’s a lot of catching up to do.

In an effort to help growers learn about growing hemp, Dr. Alyssa Collins, associate professor of plant pathology and manager of Penn State’s Southeast Agricultural Research and Extension Center, initiated hemp variety trials starting in 2017. In 2018, research continued with Canadian genetics. Collins’s efforts focused on determining which varieties would thrive in the East, seeding rate, planting date and plant response to nitrogen. Although there are no herbicides currently labeled for hemp, current trials address that issue. Trials in 2019 also included a multistate variety effort to study growing conditions and plant response in various zones throughout the U.S.

Collins describes the three main classes of hemp production as fiber, grain and CBD (cannabidiol). For those interested in growing hemp, she recommends basing the decision on which to grow on experience and equipment already owned. Farmers who are growing hay already have the equipment and experience to work with a fiber crop. Those who grow grain crops have the necessary equipment for grain hemp.

For fiber varieties, Collins said yields should be in the range of 1,000 to 2,000 pounds/acre. “It depends on how big the plants get,” she said, adding that hemp is daylight sensitive. “In our trials, we’ve seen plants get not nearly as big as we expected. A lot depends on variety, weed pressure and when it’s planted. The later you plant it, the earlier it’s going to end its life. Hemp planted earlier in the year will have a lot longer to grow.” Another issue Collins noticed during trials was transplant stress, which was likely related to holding plugs in the greenhouse, resulting in root-bound plants with insufficient root-to-soil contact.

Although Collins has plenty of experience growing field crops and identifying/solving pest issues, hemp presented challenges. Weed pressure, gray mold (botrytis) and caterpillars were among the notable problems in the field. “We’re seeing diseases that are not unexpected right now – Cercospora leaf spot (a fungus), some bacterial diseases and root issues like phytophthora,” said Collins. “Not too many insects, mostly leaf miners and grasshoppers. Insects may not have developed a taste for it yet.”

Collins said hemp growers will have to determine how to deal with weeds, and weed management measures done ahead of the crop will affect the legality of what’s used. “It’s unknown how herbicides used the previous year for a grain crop will affect subsequent hemp crops in the same field,” she explained. “If hemp is not on the label of certain herbicides, if you use them previously in that year, you have to abide by the longest plant-back period on that label.”

Several options for harvest, storage and marketing are available for hemp grown as fiber. Collins said small square bales result in short fibers, but large round bales seem to be one viable answer. No matter what the final package, drying is the main challenge for hemp grown for fiber. 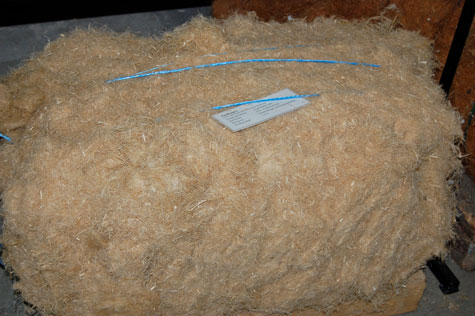 Prior to baling, hemp must be sufficiently dried to preserve quality and prevent loss due to mold.

Collins said there’s a scramble to establish extractors, fiber processing units or equipment to press for oil, but nothing is firm yet. “People who are putting in processing plants will service people they have contracts with first, then, if they have additional capacity, they will probably open up to non-contract holders,” she said. “But that means you have to think about storage and drying so you can hold the crop until the processor is ready.” She said those growing on contract should include terms regarding what happens to you and your investment if the crop tests “hot,” with THC  (tetrahydrocannabinol) levels above 0.3.%.

“We’re still learning what will trigger THC levels that are too high,” said Collins. “Some of the things we know could trigger that is stress from insect feeding, disease or drought, so do what you can to eliminate those factors. You can also test as you go. There are labs that can test for CBD and THC. Testing throughout the season is expensive, but might save you some heartache in the end to see if certain varieties are going hot.” She noted that this year the Pennsylvania Department of Agriculture tested the top portion of harvested hemp, and Penn State’s varieties ranged from 0.64% to about 1.5%.

Drying is also the critical factor in seed production, and rapid seed drying is key. “Because this is a plant that keeps flowering until it dies, you’ll be harvesting seed that’s completely mature along with seed that’s still green,” said Collins. “Moisture content is high and rapid drying is essential. It cannot stay in a bin for even a day without drying – it will mold and heat quickly because it’s high oil seed.” Collins believes that once seed dries to below 15%, the challenge will be a matter of controlling post-harvest insects, but sufficiently dried seeds should be safe in storage.

Penn State has been conducting fiber studies, but until this year, the research team has had only international sources of seed due to transport regulations. Collins said working with a Canadian hemp seed producer helped determine which varieties thrive here, but more work is needed. She added Penn State is currently participating in a multi-state fiber and grain hemp variety trial, all testing the same cultivars, to determine how varieties fare in various climates. The initial data for that study should be available this winter.

Why are we spending time and money on research and regulating when many states have a history of growing hemp, and Canada and other countries are currently growing it? Collins said current research is critical because the last domestic production was 80 years ago, and there are new concepts and issues to deal with today.

Collins said those coming into hemp production are learning along the way, and results will depend on a variety of factors. “There are so many more questions than we have answers for right now,” she said.