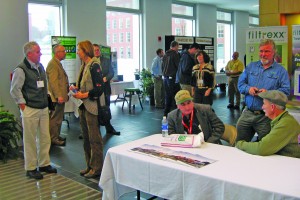 by Sanne Kure-Jensen
The “Award of Merit” was presented to Ken Ayars, chief of the Rhode Island Department of Environmental Management (RI DEM)’s Division of Agriculture by the Rhode Island Nursery & Landscape Association (RINLA). Jean Cotta, co-owner of Portsmouth Nursery in Portsmouth, RI, presented the award at the 2013 RINLA Winter Conference held at the University of Rhode Island.
Ayars has been a Rhode Island resident since 1972 and graduated from the University of Rhode Island earning Bachelor of Science degrees in Zoology and Plant Sciences. In 1985, he earned a Master’s degree in Plant Sciences with a focus on Agronomy. Since 1987, Ayars has worked at the Rhode Island Department of Environmental Management (RI DEM) in the Division of Agriculture. He has worked on a variety of programs including animal health, pesticides, land protection and farm ecology.
The Division of Agriculture Chief since 1998, Ayars continues working with farmers, municipalities and communities by focusing on enhancing farm viability, marketing and promotion, sustainable food systems, protection of farmlands and reducing regulatory burdens on our local farms.
Cotta said, “Aside from this outstanding resume of accomplishments, he is one of those rare individuals who has the ability to translate what can often be a mind boggling bureaucracy into terms that the average worker can understand.” She commended Ayars’ common sense approach to his work; this praise is rarely applied to government officials.
Ayars is patient, unbiased, dedicated and sincere. Cotta said she had never known him to raise his voice. He continues to be “Rhode Island’s strongest advocate for agriculture and the green industry, working tirelessly to ensure a future that recognizes agriculture and horticulture as important vibrant small businesses … necessary components to a sustainable economy, a better quality of life and a locally based food system in Rhode Island.” Ayars accomplishes much with shrinking budgets. He has earned widespread respect and gratitude in the agriculture and horticulture industry.
Cotta concluded by thanking Ayars’ wife Julie and daughter Alisabeth for sharing their husband and father with Rhoe Island’s Green Industry. Rhode Island farmers and growers appreciate how many nights Ayars is away from home at town and state meetings.
Rhode Island DEM Director Janet Coit said, “[Ayars’] efforts to promote and foster the growth of agriculture in Rhode Island can be seen across the state, from the explosion of farmers’ markets to the promotion of local foods in our outstanding restaurants. Seven days a week, Ken Ayars is working for the benefit of farmers and farm businesses in Rhode Island. He makes me proud to be the Director of DEM!”
Ayars thanked RINLA members. “I am deeply appreciative of receiving the 2013 Award of Merit by the Rhode Island Nursery and Landscape Association,” he said. “RINLA is a progressive organization and the industry it represents has an important role in the state’s economy, quality of life and environment, as evidenced in part by the recent green industry economic impact study funded by DEM and conducted by URI. DEM supports the state’s natural resource-based industries in a plethora of ways, all of which contribute to Governor Chafee’s and Direct Coit’s economic and environmental priorities to move Rhode Island forward.”