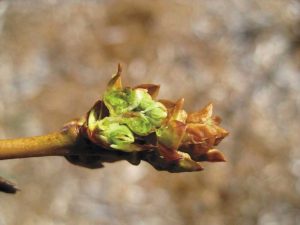 by Kristen M. Castrataro
It is only spring, but already many Rhode Island fruit growers are expressing grave concerns about this year’s harvest. The mild winter may have been welcome to many, but Rhode Island peach growers are not among them. The warm temperatures meant that peach trees began gearing up for spring in January. Frigid temperatures moved in during February, however, killing the fragile blossoms. Growers across the state are citing 100 percent crop loss in peaches.
It is not only the peach crop that has been damaged by cold temperatures. Later-blooming fruits, such as blueberries and apples, were unaffected by the February cold snap but are also showing damage. Their winter-injury occurred April 5, when temperatures dropped to lows of 16-21°F across Rhode Island.
University of Rhode Island Entomologist and Fruit Extension Specialist Heather Faubert has been scouting orchards to determine the extent of the loss. She notes: “The buds that are the most advanced, such as McIntosh, Cortland, Empire and Mutsu suffered the most damage.” Losses seem to be heaviest in the northern part of the state. Her scouting revealed “an average of 60-80 percent dead apple buds of those buds that were at the half inch green stage.” The southern part of the state showed much less damage, possibly because flowering tends to occur 1-2 weeks later there than in the north.
Some apple growers have expressed concern that sampling procedures may be giving a false assessment, however. The usual test for live buds is to cut the buds in half. One grower mentioned that when he was sampling his orchard using that approach he had believed only the “king” blossom to be dead. As he cut further down into the bud, he found that the entire cluster had winterkilled. It is therefore possible that actual kill percentages could be even higher than the reported 60-80 percent for earlier-blooming varieties.
April’s cold snap was not only hard on tree fruit. Blueberries have also suffered, but it is more difficult to determine the extent. Faubert notes “blueberry buds that have stretched out suffered much more damage than blueberries that are closed buds.” To test for damage in blueberries, one must cut the buds diagonally: damaged buds show brown while live buds are green inside.
Rhode Island’s growers are mostly diversified; so one crop failure can usually be mitigated by other farm endeavors. A two to three-crop failure, on the other hand, can have serious financial repercussions. For some growers, the auxiliary activities on their farms only thrive because of their primary crop. For example, a farm may bring in large numbers of school tours, which add to the farm’s financial viability. Without a crop for students to pick (or two or three), there will be less reason for the schools to come and more probability that finances will suffer.
Many farmers are already considering alternative activities and products to offer to customers that will enable them to keep their agritourism income even if they should lose their main agricultural crops.
Many farmers are already considering alternative activities and products to offer to customers that will enable them to keep their agritourism income even if they should lose their main agricultural crops. Some of these include hosting events on their farms, replacing fruit picking with planting ornamentals for school tours, or integrating personal hobbies into the business. For some, this season may find them working off-farm at seasonal jobs.
It has often been observed, “necessity is the mother of invention.” Knowing these inventive growers, it is likely that out of this trying season will be birthed some innovative farm-based endeavors.