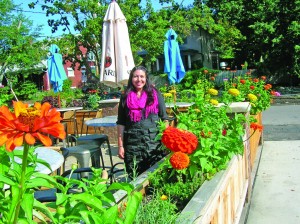 by William McNutt
It took 46 years to accomplish, but Ohio State’s horticulture building finally has a roof garden. When Howlett Hall was completed in 1967, a roof garden was supposed to be part of it, but as so often is the case, the money ran out before this could get done. Now the $450,000 project is completed, at probably double the 1960s construction cost. At least one restaurant in Columbus also has a roof garden on top of their one story building, but the bulk of specialty produce for the restaurant is grown outdoors or via high tunnel in a greenhouse setting, located in a more rural location. The OSU site will be used primarily for research, especially on dry tolerant plants, according to Mary Maloney, director of Chadwick Arboretum and Learning Center.
Maloney gives unstinting credit to Megan Welsh who saw the project to completion after her own graduation from OSU in 2011, with a double major in horticulture and construction management. Maloney says Columbus has several green roofs, set up primarily to enhance landscaping, but that none offer easy public access as a demonstration of green technology.
Plants now in the garden were chosen for hardiness and ease of care, with flora anchored by sedum, a hardy low growing cover, and includes thyme, yarrow, lavender, blue fescue and Rudbeckia. Welsh consulted with departments of entomology and horticulture to determine these original plantings, all perennials, plus possible research needs that could be garden based. While the garden is now primarily for demonstration, one graduate student has already asked for permission to use it as a basis for a PhD. dissertation, and edible plants may be added in a couple years. Maloney says with the site getting sunlight and hot summer weather, irrigation should not be used, thus the necessity of drought-tolerant plants. Research would be feasible on insect management, weed control, GMO crosses, climate modification on growth of experimental plantings, plus the effect of expanding greenhouse and high tunnel use to overcome adverse climate problems.
Dr. Bruce McPheron, OSU Ag College vice president, who had observed green roof usage in his former position at Penn State in addition to a prior career in entomological research, has directed funding toward meeting updated disability standards in the conference room leading to the roof, plus setting up television conferencing facilities for national and international exchanges concerning scientific research. Since the nearby entomology department has beehives, the current emergency regarding colony collapse is certain to be a priority item. Students carrying out specialty crop research can be brought in from the OSU West Campus, which has the only farmland left on University grounds, in order to help develop possibilities for future research that can be expedited by the garden. Edibles will be the last area for developmental research; Welsh indicated this would be an excellent site for growing both indoor and outdoor tomatoes for fresh and processing research.
After the existing roof was replaced, a protective layer was laid down, followed by two layers of structured soil, first one pellet sized, next a smaller size to facilitate drainage, with a final topping of drainage and growth media, in order to imitate natural soil conditions. This type of preparation will help contain and move rainwater. The cost was born by private donors and a grant from the Ohio Environmental Protection Agency, in total nearly a half million dollars. Expected benefits are many according to both Welsh and Maloney.
First consideration is that 200,000 gallons of storm water runoff will be diverted each year, staying on the green roof rather than  running into drains and polluting nearby river watersheds. Ordinarily such a building roof would have a 15 year life span, addition of a roof garden should nearly triple its existence. Lifespan of the new roof will be much longer, with emerging plant protection from the sun.There will also be diminished utility costs in the summer, with garden foliage lowering interior temperature and subsequent reduced air conditioning costs. This particular roof garden will add green space to existing urban landscape, since plantings chosen for drought tolerance will thrive with little rain.
Crest restaurant in Columbus is one of several embracing the concept of roof gardening, in this case under the direction of Trish Clark. Her husband Aaron is to become manager of the Italian Village direct marketing site. Both of them are growing small fruit and vegetables on a reclaimed site near the restaurant, which will be utilized in both the restaurant and market, while the restaurant roof site will be primarily used for non-edible decorative plantings. Produce will be non-organic, but cited as chemical free, which is the case with many restaurant suppliers who do not want go through the three year multi-recording program necessary to achieve organic certification. Clark has worked with architects on the roof construction, secured needed city permits, and helped develop drainage systems for rainwater into tanks for recirculation that can be used later for irrigation. Crest is part of a new wave of restaurants operating on the principle of green and sustainable, replacing paper and plastic products with material that can be recycled, even into patron homes via the traditional “doggie bag.”
Ms. Clark has spent some time with Dr. Joe Kovach, research horticulturist at OARDC in Wooster, gaining information on the culture of hi value crops on limited acreage. She sees a need to carry out sustainable production at lowest possible cost, while improving soil maintenance and returning more organic matter than is removed from the soil.